Books of the Year

One final look back before I turn to face 2022. Following a practice started last year, I have maintained a thread of tweet-sized reviews of the books that I read in 2021 – all of them. 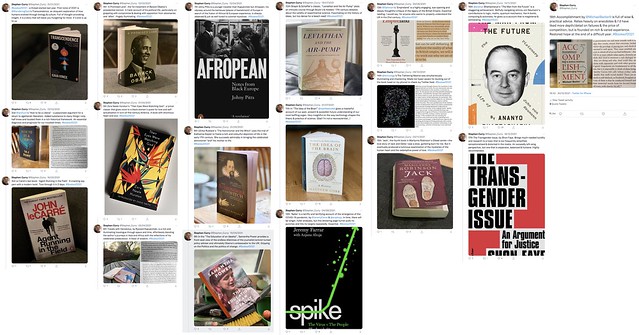 The Twitter thread of the books I read in 2021. Click on the image to see the high-res version.

There are only eighteen in total, a singularly unimpressive tally – fewer even than I managed in the first year of the Covid-19 pandemic. The only thing I miss about my commute is the loss of a regular slot for reading during the working week. Although life settled into a wearisome rhythm while working from home, the time gained from not taking the bus and train into London was not recovered for reading. Clearly, I lack discipline.

Even so, there was a decent level of diversity within my 18 titles – around 36% were written by women and 31% by Black or minority ethnic authors. I like to think I’m not too old to have my mind broadened. However, only three of my reads were novels and while my non-fiction selections demonstrate — I hope — a reasonable breadth of interest, most of those are rooted in history, and scientific history at that.

So much for numbers. Quality should usually trump quantity and this year’s titles have afforded me a great deal of pleasure and insight. While I have long been a fan of Marilynne Robinson, Jack seemed to take a while to reach the deep resonances that I recall from the opening pages of Gilead, the first instalment of her Iowa novels. Zora Neale Thurston’s Their Eyes Were Watching God, written over eighty years earlier, was a fresher and more impactful encounter.

As for this year’s non-fictional forays, Obama’s A Promised Land and Power’s The Education of an Idealist both provided terrific insights into the challenge of trying to do some good in the world through politics (as did Michael Barber’s more practical tome, Accomplishment). I was also gripped by Ananyo Bhattacharya’s prodigious biography of John von Neumann (The Man from the Future) and by Spike, Jeremy Farrar’s and Anjana Ahuja’s blistering account of the Covid-19 pandemic, while Matthew Cobb’s The Idea of the Brain gave a fascinating and sobering view of our faltering attempts to understand that most precious organ.

The most important book I read this year was Shon Faye’s The Transgender Issue which brought much needed cool-headedness – and a human heart – to a topic that seems only ever to be debated in screams on social media.

But my favourite of the year has to be Ian Dunt’s How to be a Liberal, a rich and thoughtful exploration of the development of liberal thought over the past several centuries. It’s a strand of thinking that seems to be under relentless assault from the populists who have taken centre-stage for the moment, but Dunt’s book ably demonstrates that its roots run deep. So we might still hope for another flowering.

3 Responses to Books of the Year