Review: The Many Worlds of Albie Bright

After publishing my round-up of the books I’d read in 2015, the author Christopher Edge got in touch via twitter to offer a review copy of his new book, The Many Worlds of Albie Bright. 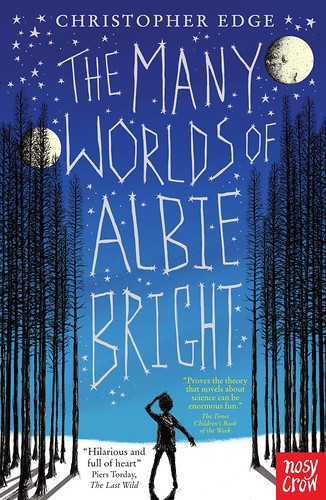 It’s a short novel for children which has an ambitious amount of science threaded into the plot. At the beginning of the story young Albie has just lost his physicist mum to cancer. By way of consolation Albie’s physicist father – a somewhat distant figure because of his globe-trotting as a TV scientist –  tells his son about the theory of parallel universes and suggests that in one of these his mum might still be alive and well. With an improbable mix of his mum’s laptop, a cardboard box and a radioactive banana, Albie sets off on a trip through the multiverse, acquiring a smattering of science and a some valuable life-lessons along the way.

Edge shows plenty of invention in telling his tale. I can tell you that I enjoyed it but I don’t consider myself a reliable judge of children’s fiction. So I sent the book to my nephew and niece, who are about the right age to be in the target audience. Here are their rather lovely reviews.

I enjoyed the book a lot. I liked that it gave you some interesting information about parallel universes. I liked that you can’t relate it to any other books (that I have read) because it is very different – such as the theme and the characters. And that because it is in a completely different universe all the characters are so similar, such as Albie as a boy and Alba. I liked how that the writer described them as the pretty much the same but they have a different background – I mean there are things that are the same such as the dad being famous and the mum dying at a certain age or way.

I liked the theme because I know there are a lot of sci-fi books but not many of them include actual science and things that scientists are investigating such as parallel universes where all possibilities are happening so in one you are killing nigel garage and in the other Germany may have won world war two, so we could be speaking German.

The final thing that I want to say is that the writer have really gotten into your heart when the mum dies because he wants you to be sharing Albie’s sadness.

I thought that The Many Worlds of Albie Bright was a great book with plenty of emotion and a wonderful storyline that had me hooked from the beginning.

It reminded me a bit of The Curious Incident of the Dog in the Nighttime because of its oddly charming writing style of the main character speaking directly to the reader. The narrative itself was interesting and extremely enjoyable to read and had a lovely friendly tone to it throughout the story.

One of my favourite parts of this book is Albie explaining the science and theory of his experiment. It was a beautiful mix of “that sounds like it makes sense” and “but it would never work and makes absolutely no sense”. The writer explained it in such a way that you completely went along with it no matter how ridiculous it sounded.

The story was amazing and made me laugh, smile and cry. It was truly wonderful and I would definitely read again. The only thing that I slightly raised an eyebrow at was the staggering amount of convenience and ex machina but I suppose that it’s all part of the story and the unbelievably believableness about it.