It’s been a funny old 18 months as world events suddenly came crashing into my corner of science – the immune response to viral infections in the lung. One of the unexpected outcomes of the pandemic was that I wrote a book (Infectious: Pathogens and how we fight them). In the book I cover the history of infectious disease research and the enormous strides that have been made. One of the great joys of writing the book was learning about all the scientists who have helped us in our battle with infections. Thanks to these women and men, we had a COVID19 vaccine within 100 days of the virus first being sequenced, a truly remarkable feat. I think it is fair to say that the pandemic has seen the return of some level of respect for expertise. 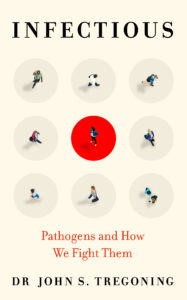 That we are emerging from the other side of the pandemic is thanks to expertise of many sorts – the healthcare workers who treated patients throughout, the epidemiologists and behavioural scientists who plotted the tricky course of how nations should respond, the lab scientists who developed and ran the diagnostic tests and the immunologists who developed a vaccine at unprecedented speed.

Of course, not everyone has respected scientific expertise. There has been a congealing of conspiracy theories on social media during the pandemic. These rumours invariably hurt the people who believe them – the rates of infection were much higher in the no-mask/ anti-vax states of the US. The ongoing digestion of toxic guff and the polarisation of society are beyond this article, but if the virus deniers found catching COVID a surprise, just imagine how shocked they are going to be when they discover climate change is real and their house is 6 foot under water and on fire.

Shouting at other people electronically has not been reserved for the scientifically illiterate. Science-COVID twitter has (like Saturn) devoured its children. Which is a crying shame. In the spring of 2020, Twitter had been the go-to source for information about the spread and the evolution of a fast-moving pandemic, but in the summer 2021 it was a cesspool. You were just as likely to see scientists trolling each other as members of the public. Though maybe this shouldn’t be such a surprise – it harkens back to a bygone era that I had mistakenly assumed was long gone, when academics let their feelings for each other be known very publicly.

In researching my book Infectious, I discovered that infectious disease research has always had a shouty streak, with antipathy between key players. Anthrax research and the Franco-Prussian war fuelled enmity between two of the grand messieurs of infection science: Louis Pasteur and Robert Koch. Jonas Salk and Albert Sabin, who both raced to develop polio vaccines, were not exactly on speaking terms. Salk’s inactivated vaccine won that race, much to the chagrin of Sabin who described him as a ‘mere kitchen chemist’. Ignatius Semmelweis, who in the 19th Century first demonstrated that washing your hands between touching dead bodies and delivering babies might be a good idea, also experienced intense acrimony but this was less from a single person more from the entire medical establishment.

And finally, my favourite – Félix d’Hérelle, a French-Canadian microbiologist who lived the kind of colourful life no longer seen in career academics. Amongst other things, d’Hérelle lost all his money in a failed chocolate factory, worked in Guatemala, Mexico, France, India, the USA and Egypt (not trivial before international flight), had a brief run-in with the secret police in Soviet Russia when his mentor fell in love with the same woman as Beria (the notorious head of the Stalin’s secret police) and was put under house arrest by the Wehrmacht in the Second World War. Scientifically his main contribution is as an discoverer of the bacteriophage (in parallel with Fred Twort), but he antagonised Jules Bordet, a Nobel Prize winner, to such an extent that d’Hérelle ended up threatening Bordet with a scientific duel. Though it is not clear what a scientific duel entails – pipettes at dawn possibly?

So, Covid-19 disputes are nothing is new really. Some people argue that competition can drive progress. I am not convinced.

Where do we go from here? As someone observed recently, science Twitter could definitely do with a reboot. Whilst debate is healthy; entrenched opinions based on sketchy data are not. I certainly preferred it when scientists passively-aggressively slated each other off in reviewer’s comments rather than this all-out warfare. The simplest answer is to step away from social media and talk to people in the real world, most of whom are simply happy that the pandemic is by and large over. Or maybe retreat into a good book? Ideally one taking a long view of our progress in Infectious disease research.

John Tregoning is reader in respiratory infections at Imperial College London and author of the upcoming book INFECTIOUS published by OneWorld.