In which darkness comes knocking 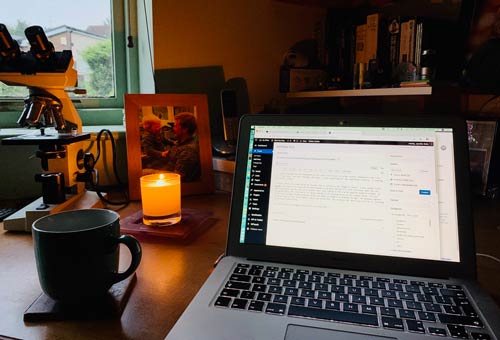 It’s quite telling that the back end of this blog site is full of recent drafts, abandoned a few lines in. I have ideas, and most evenings, the time, to dash something off. But something, recently, is sapping my creative energy.

A combination of factors is probably responsible. One is certainly the change of season. I have always loved autumm, but there is a trade-off for the turquoise and gold palette of a fine afternoon, when the sun warms your back and you can sit in a deck chair just taking in the scarlet wash of Virginia creeper on the garden wall, the lazy spiral of leaves adding to the growing piles on the unswept paths, the last zinnia and sunflower blooms glowing yellow and umber in tangles of browned foliage. And this trade-off is the darkness, coming in like a relentless tide against the fools-gold summer days. Recently the rains have settled in, too, so even daylight struggles to register.

The other reason is probably the stress of a new term, and the ever-present reality of the uncertainty of my position at the university. For a while there was a promising possibility, but it evaporated in the way of so many others in the academic career structure, blown south by some politics that I don’t have the skill set to negotiate nor the will to chase. My heart just isn’t in it any more. After a while, you just find yourself beating your head against the same wall, when all you really want to do is think about science and how best to make things better for patients. So I’ll keep writing major grants that will probably keep getting rejected, and keep scraping by with the smaller ones that occasionally get pulled up from the blue in my ratty net, as surprising as a coral-pink starfish in a crop of manky seaweed. And if all else fails, I can teach full-time – or decide that’s not enough, after which I’ll give up and try something more fulfilling. Just knowing that an escape is possible makes the current situation easier to bear, even if it never comes to that – those nuclear codes are safe in the back of the drawer.

So – this season of my discontent sets in. And underneath it all, the words that I would like to say stay unsaid.

Thunder rumbles, and I sit here in the dark with my candle against the darkness, hoping to find some inspiration.

Scientist, novelist, rock chick
View all posts by Jennifer Rohn →
This entry was posted in Academia, Staring into the abyss, The profession of science, Writing. Bookmark the permalink.