In which Frank leaves the building Last night I lost a friend.

I couldn’t think of a more graceful way to start this post, as I am still a little bit in shock. But last night, I lost a friend.

Back in about 2006, I found myself in a London pub with a group of friends I call “the Nature crowd” – many being senior editors at that august journal, but also including a few scientists, ex-scientists and friends from other walks of their lives. I’d fallen into their amiable circle years earlier via a former post-doctoral colleague who’d left the bench to join the ranks on the other side of science publishing.

At that time smoking was still permitted inside public buildings, but this group preferred to stand outside. I remember I found myself suddenly alone at the table as the entire party decamped. But a few minutes later, realising what had happened, Karl chivalrously popped back in to keep me company.

He started telling me about a band he was in. I told him how much I loved to play and especially sing, and before I knew it he was inviting me to come along to the next practice session of Frank-a-delic, to see if there was a fit.

I was terrifically nervous when I arrived at The Premises, a famous rehearsal space in the East End. The band already had a lead vocalist, Jane, and I didn’t want to tread on her toes. As an alto, I am accustomed to singing harmony and, having a flair for it, I thought I could contribute back-up vocals. But I needn’t have worried – the natives were friendly and welcoming. And the most welcoming of all was the band’s founder and guru, “Frank” himself (real name, Martin Griffith). He had a smile like the sun suddenly emerging from a bank of storm clouds. Jane hadn’t yet arrived, so he suggested I go up to the mic and help them practice “Psycho Killer” in the meantime.

“You do know ‘Psycho Killer’, right, Doc?” he said briskly. (He always called me Doc from that day forward.) “Here’s the lyrics sheet.”

And the rest is history. 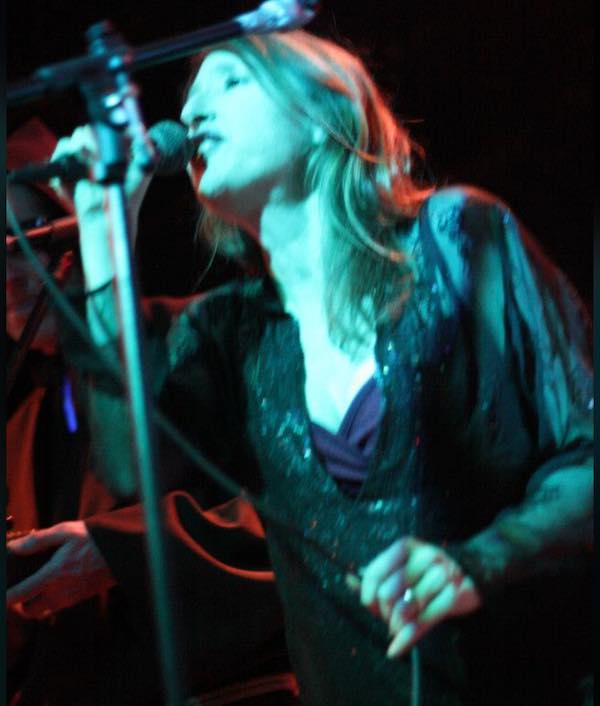 We played together for about the next eight years or so, until life gradually became too much for everyone to keep up the pace. We played about one major gig a year, crazy (and expensive, as we hired all the PA and kit) parties we threw for our friends in various venues and festivals around England, often in costume. It turned out that neither Jane nor I had the vocal stamina to sing lead on every song, so we traded off, and even took on a third lead vocalist, Rinoko, a bit later. We only played covers, but we prided ourselves on doing them in different, usually weird, styles. So a punk version of “The Girl From Ipanema”, sung by Paul, one of our percussionist, cross-dressed as a nun, was entirely normal for us. 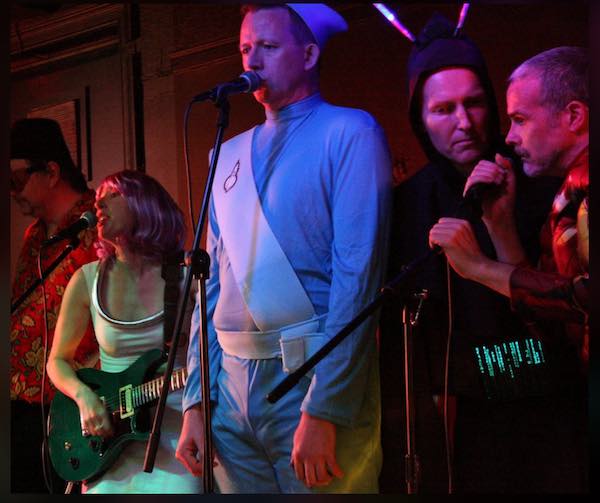 We were sprawling and huge, with 17 members at our apex, making it difficult to fit on most stages. We had a brass section, three guitars, two basses, two keyboards, three percussionists, a scattering of singers and even a theremin. We were unbelievably, ear-splitingly loud. What we lacked in prowess we made up for in enthusiasm. Our parties were mad fun, and I think everyone enjoyed themselves, including the hardcore audience regulars who followed us faithfully til the end. 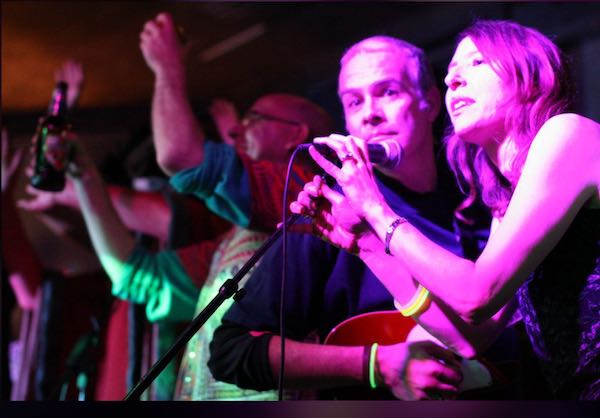 And through all of this, Martin would stand in shades at the helm behind his keyboard, nodding his head to the rhythm, a benevolent presence who kept us real and suitably bizarre. Afterwards, he would often ascend into the DJ booth and spin a great dance session. I can still see him up there in the booth at the pub in the centre of the Archway roundabout, face glowing purple in the lighting with a look of rapt happiness on his face. One of our Imbibe gigs, with Martin overseeing (second from right)

My first gig was at the Imbibe bar in Southwark. I can remember only dribs and drabs, such as the moment when Bill Hanage (now a famous epidemiologist at the Harvard T.H. Chan School), dressed in a fetching Miami-vice-style jacket, was so overcome by our rendition of “Anarchy in the UK” that he rushed onto the stage, insinuated himself into the circle of backup vocalists around a single mic and joined in. I remembers the Seven Bells festival when we were the headliners, but the local cops yanked the electricity only three songs into our set. I remember a small stage in Brighton that was so hot that pools of sweat formed under every player, and it transpired that my silver sequinned dress, picked up at a charity shop for a fiver, was see-through with camera flashes. I remember possibly our best gig ever, at the Bullet Bar in Camden, when the entire venue, packed with hundreds of people, flailed and waved their hands in ecstasy. On lead vocals, I remember bringing down the house with renditions of “In These Shoes?”, “Pure Pleasure Seeker” and “She Blinded Me With Science”. But secretly I preferred backup vocals, fading back from from the spotlight, spinning harmonies and tapping on claves, scraping a guiro or brandishing a shaker or tambourine. 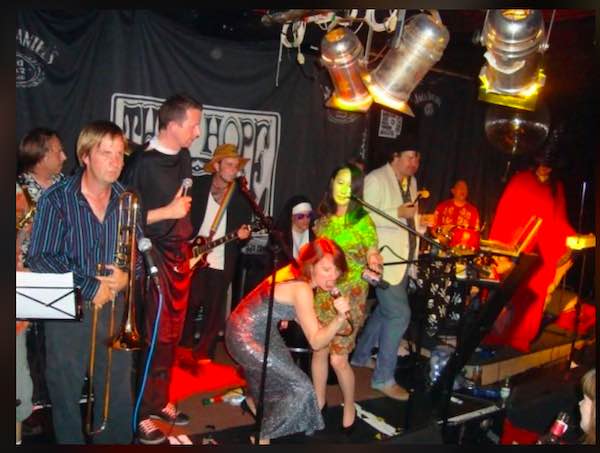 Last night the news came to us on Facebook. The band quickly mobilised, dashing off shocked texts, unable to process the enormity of Martin being gone. I looked into my Facebook message timeline and saw Martin’s name in the list – he often sent me links to music he thought I’d like. With a pang I noticed that I’d never even responded to the last few, let alone listened to them, as they’d arrived during the height of lockdown home-schooling. Blinking back more tears, I hesitated forever at the silliness of the gesture, then typed my final reply:

“I’m so sorry I didn’t have the chance to say goodbye. Rest in peace dear friend.”

After a moment, the little blue tick appeared signifying “received”, like a punch in the gut.

Now I’m listing to all the links I ignored from this generous sharer of music, a passionate man who viewed songs as highly personal gifts. First up, “Ka Bu Txona” by Dino d’Santiago. As expected, it is exactly my cup of tea. As the mellow tones fill the room now, I like to think that Martin is up there somewhere, enjoying it with me.

(all photos by Karl Ziemelis, used with permission)

Scientist, novelist, rock chick
View all posts by Jennifer Rohn →
This entry was posted in Music, Obituaries, The ageing process and tagged Music. Bookmark the permalink.

1 Response to In which Frank leaves the building