In which climate apocalypse feels inevitable 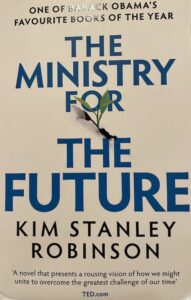 Here in England, we are braced for an historic heat wave. The Met Office has issued its first ever ‘Red Warning of Extreme Heat‘ for much of the UK, with temperatures set to reach a new record of 40 degrees C today. It hasn’t rained here for many weeks, and the grass is baked brown and tinder-dry. On the Met Office map, a sinister blob of scarlet spreads over otherwise orange terrain, and if you zoom out to the rest of the continent, it’s the same in many other countries. Wildfires burn in Spain, Portugal and France, and a number of people have already died.

Some of my America friends seem bemused that the Brits are panicking about mere 104 degrees F temperatures, but you have to keep in mind that we aren’t equipped for this. Even in slightly less intense heat waves, people die here. The vast majority of homes, and many offices, do not have air conditioning or decent insulation. A number of people commute by trains, whose tracks start to warp in extreme heat.

It’s a big deal because it’s not normal – though of course, sadly, it’s part of our coming new normal. A new normal that feels inevitable now. I consider my last trip to the beach in a car burning fossil fuel, and think: how strange/reckless/crazy/amazing will this activity seem to someone twenty years from now, a hundred, five hundred? When I write in my journal about my lush green garden, where I can wander out and pluck an apricot from a tree, will this seem like some sort of paradise lost?

Climate change, and how on earth we are going to fix it, is the subject of Kim Stanley Robinson’s latest novel The Ministry for the Future – a story that starts with a deadly heatwave in India and goes downhill from there for its characters. It’s one of those books that has lingered long after I tucked it away on a shelf. A strange sort of novel, it focuses on a governmental policy team in the very near future – 2025 – trying to turn around the planet-sized oil tanker of climate change using a series of incentives and punishments both small and large, ranging from global to intensely local. Being in uncharted territory, the team just throws whatever they have at the problem and sees what sticks. Nothing is off the table, not even government-sanctioned black ops and guerrilla manoeuvres. Although it’s like trying to fight a forest fire with a squirt gun, momentum gathers in interesting ways as the drama plays out over many decades. The main storyline is intercut with hundreds of vignettes, first-hand accounts of what the dying planet is doing to individual people all over the world. The picture slowly builds, blinding-bright sunlight splintered through a glass shard of narrative.

By the end, all you can think is: we might just be able to pull this off. But how to convince everyone else that we need to? Persuading others to read this book might be a good first step – a droplet against an inferno, perhaps, but someplace to start.

Scientist, novelist, rock chick
View all posts by Jennifer Rohn →
This entry was posted in Policy, Science fiction, Staring into the abyss. Bookmark the permalink.

2 Responses to In which climate apocalypse feels inevitable