In which I cherish useless facts

I’ve just had my first letter to the editor published in the Times (of London, that is, not of New York). It wasn’t an urgent missive about science policy or politics or the state of the world or the Queen’s death – just a little musing about a pretty weed that was one of hundreds of Ohio native plants and trees I studied in a botany class as an undergraduate at Oberlin College. 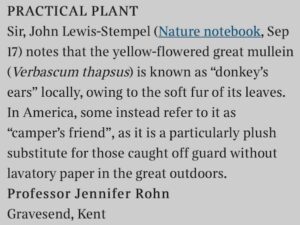 People sometimes ask me what good my Liberal Arts education did – especially as a scientist. It’s a particularly interesting question in the UK, where science graduates start specializing as children in school; after this, most undergo a heavily restricted three-year BSc degree consisting solely of modules about that science. As a result, they are taught little about anything else. Even normal high schools and undergraduate degrees in the US allow students to take a broad range of topics, so to a typical Brit, my even more expansive liberal arts degree seems completely bonkers. How have they benefited me, my years of Ancient Greek and Spanish, my modules in Ethnomusicology, Linguistics, Cultural Anthropology and the dozens of other modules I was required to take outside of my Biology major? I even got credits on my transcript for playing in the steel drum band and the Javanese gamelan ensemble and being part of the Ultimate Frisbee team.

I’m not sure it made me a better scientist, but I’m sure it made me a better person. The botany class where I learned about “camper’s friend” was run co-run by Dr David Benzing, an expert in epiphytes, and George Jones, a 90-year-old alumnus who led us around the local woods and fields collecting specimens and telling us stories about which plants had medicinal or edible properties. You had to keep on your toes – he was quick as a flash and would start talking as soon as he reached the specimen of interest, whether or not the gaggle of students had caught up with him. The class began in the depths of winter, when it was so bitter cold that we had to use pencils to take notes because the ink in our ballpoint pens would freeze. Our first exam was a series of one hundred different winter tree twigs, laid out on the lab benches, which we had to identify by genus and species only by inspecting the color, texture and bud-scar pattern. Much of university life has faded, but I can still see those twigs laid out on the scuffed black epoxy resin, and various still-frames of happily collecting leaves and blooms as winter finally morphed into spring. On one occasion, an angry farmer charged over on his tractor, gun aimed squarely at us. Dr Benzing blanched, but the girls of the party looked up at him with big imploring eyes, flowers in our hair, and the man finally cracked a smile and lowered his weapon.

I have long since forgotten how to identify those one hundred Ohio trees, and am immersed in a different country with a different spectrum of flora. But as autumn deepens under golden sunshine and indigo-blue skies, I’m comforted by the familiar species of my youth: great mullein, yarrow, asters, the scatterings of horse chestnuts on the faded grass. 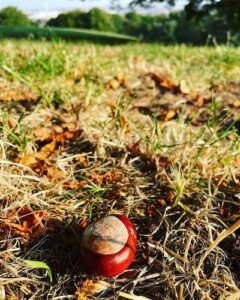 Scientist, novelist, rock chick
View all posts by Jennifer Rohn →
This entry was posted in Nostalgia. Bookmark the permalink.

3 Responses to In which I cherish useless facts