At the end of 2013 and 2014 I wrote blog posts on Occam’s Corner (over at the Guardian) to list and briefly review the books I read in each of those years. I want to develop this practice into a good habit because it spurs me to read; and I hope it might also serve to flag up titles of interest to others. I am planning to do the same thing again when 2015 draws to a close but this time I am trying to ease the task by writing short reviews as I go along.

So here goes with the first one because I have just finished Martin Paul Eve’s Open Access and the Humanities (subtitled Context, Controversies and the Future). 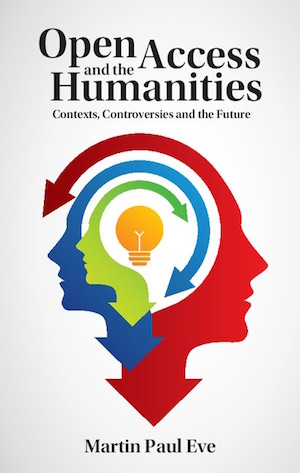 This book will mainly be of interest to humanities scholars, particularly if they have felt overwhelmed or bamboozled by the STEM-led drive to open access modes of scholarly publishing. I hope many of them will read it. Eve is up-front about being an advocate but lays out the issues with care and candour. The implications of the changes under way in academic publishing may be widely disputed but this is no heated polemic. As further incentives to humanities readers, at 152 pages in the printed version the book is concise and, appropriately, there is an open access version that can be downloaded for free.

Open Access for the Humanities is divided into five short chapters that cover the background to open access, the economics of academic publishing in a digital world, the implications of new forms of licensing, monographs (the longer form of academic writing favoured in the humanities) and innovations in peer review that arise from the shift to OA.

Inevitably there is some overlap in the opening sections with Peter Suber’s Open Access (which I reviewed previously) but few of Eve’s readers will have read that book and he serves them well by providing a cogent digest of the history and technicalities of OA. I particularly appreciated his tracing of the roots of OA to the open software movement and, in particular, to Richard Stallman’s innovative thinking about how new models of licensing needed to be developed for a digital world. Throughout, Eve’s examination of how the drive to OA intersects with strong academic, economic, political and cultural cross-currents is studded with insight. He usefully separates the economics of publishing from the economics of academic prestige, questions the shifting perceptions of value of humanities scholarship situated within an increasingly marketised university system and a digital culture that demands greater transparency and engagement, and finds some common ground for humanities scholars and the authors of scientific research.

Although Eve clearly favours an OA future for humanities scholarship, he is careful to explore the counter arguments. Sometimes these are dealt with immediately, as in his challenge to the writings of Robin Osborne on this topic (PDF)); elsewhere it is left to the reader to weigh up the issues.

Ultimately, although he may not have cut the Gordian knot preventing the humanities from warmly embracing OA (which academic community has?), Eve has at least unpicked some of it with his assiduous inspection of the arguments. I would have to read the book again to do full justice to a treatment that engages a complex topic on all fronts but I’m afraid don’t have the time right now. I do know that I shall be returning to Open Access for the Humanities for guidance as the debates rumble on.