What was your carbon footprint for 2019? Mine was more of a bootprint, almost entirely because of flying. 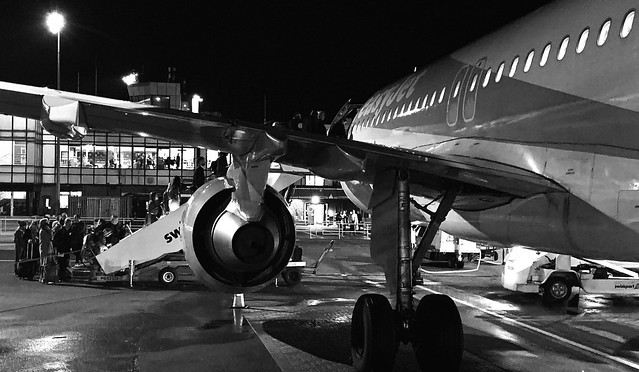 International travel has long been considered one of the perks of academic life, something that lifted the job out of the ordinary and cemented our membership of a trans-national community of scientists and scholars. Over the years I have travelled to Grenoble and Hamburg for experiments, to Tokyo and Honolulu for meetings with collaborators, and to places like Beijing, Santiago (in Chile) and New York for scientific conferences.

For much of that time, though I may have travelled far, the trips were relatively infrequent. Some years, particularly early in my research career, I did not venture beyond these shores. Now that I have clocked up a few more years and moved into management and policy work, I have also been clocking up the air-miles.

2019 was my worst year yet. By my count, I gave at least 26 invited talks over the last twelve months, 16 of them outside the UK. I travelled abroad on five further occasions on university business and to attend grant panel and advisory board meetings. I also flew to Ireland six times to visit my elderly parents, and my wife and I treated ourselves to a trip to Marrakech at Easter. As well as keeping count of the number of journeys, I was moved this year to tot up the amount of carbon dioxide added to the atmosphere by my travels. The results are pretty shocking.

There are a variety of online tools with to help you work out the impact of your air miles,  which (from my limited testing) give similar results. More or less at random I used the calculator at www.carbonfootprint.com, and got the results below. 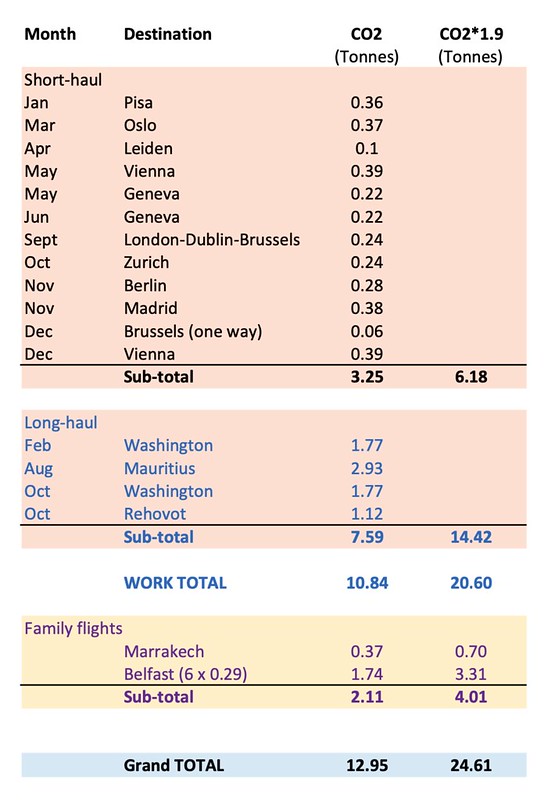 These numbers are a bit squishy because there are factors that are tricky to take into account. For example, long-haul is ‘better’ than short-haul, because taxiing and take-off use proportionately more energy; and newer planes are more energy-efficient. The tally also depends on how many of the seats on the plane are occupied and where you are sitting: fuller planes and economy seats that take up less room are less damaging to the environment per passenger mile. You can also choose in this calculator (as I have done) to take account of radiative forcing, the increased effect on global warming of carbon emissions at high altitude – which increases your total by a factor of about 1.9.

Even so, I will assume that the resulting tally is reasonably robust and mine is very large. By flying for work I effectively added 20.6 tonnes of CO2 into the atmosphere and a further 4.0 tonnes because of family visits and that trip to Marrakech, making a grand total of 24.6 tonnes. That compares to the annual total for each UK citizen (averaged over all domestic, industrial and commercial activities, including transport) of about 5.6 tonnes. That number is 8.6 for the average EU citizen, 16.1 in the USA, 2.4 in Brazil, 1.9 in Morocco and 0.6 in Nigeria (see Wikipedia for the full list).

Globally, transport accounts for about 22% of carbon dioxide emissions. Of the various modes of transport flying is the most damaging (closely followed by cars with a single passenger). As someone who commutes to work by train and tube, I don’t do many miles by car each year, but clearly my flying habits are problematic. Not only am I among the 15% of British people who take 70% of all domestic and international flights, I am in the 1% that takes over twelve flights a year.

Although almost all of my trips in 2019 have been due to my work to promote equality, diversity and inclusion in higher education, and to advance DORA’s campaign to reform research assessment in the academy, my efforts to make the world a better place are undermining climate campaigners who are trying – increasingly desperately – to save the planet from harm. I might allow myself some mitigation because of the nature of my work, but there’s an obvious dilemma here and I need to cut back on my travelling. But how?

There are some practical measures I can take. I already make pretty good use of the train where the time-penalty is minimal to non-existent – always within the ‘mainland’ UK and for trips to Paris, Brussels and Amsterdam. With better planning (and websites like www.seat61.com), I should be able to extend the range of my train-travel but there are practical limits on that. When invitations come in, I will also think harder about whether I should accept and ask more pointed questions about the purpose of the meeting and the size of the audience. I can also consider alternatives to me taking the trip. For DORA-related invitations, for example, I can do more to call on members of our steering committee and international advisory board who may be geographically closer to the host (I have already done this for a meeting I was invited to in New York next summer). And although giving a talk by video-link is still very much a second-best option, both because of the unreliability of the technology and the loss of face-to-face contact that is still so enriching in this networked age, I’ll start seriously considering that as an option as well.

These are small steps – probably too small. I don’t imagine for a moment that Greta Thunberg will be impressed. It is at least a start, but to help me go further – and perhaps be more radical – maybe you can leave a comment to say what you are doing to reduce your carbon bootprint?

This entry was posted in Science, Scientific Life, Travel. Bookmark the permalink.

10 Responses to My carbon bootprint