“The Queen is dead; long live the King!” is such a cliché of stories and films that it was surprising to hear it for real. Not that we did actually hear it for real. The secrecy surrounding the Queen’s final hours means we cannot be sure what was said at the moment of her passing or even if the new King had arrived in time. But the transition was immediate and although the country is now seeing out a long period of mourning, the idea of ‘Prince’ Charles has clearly also died a death. 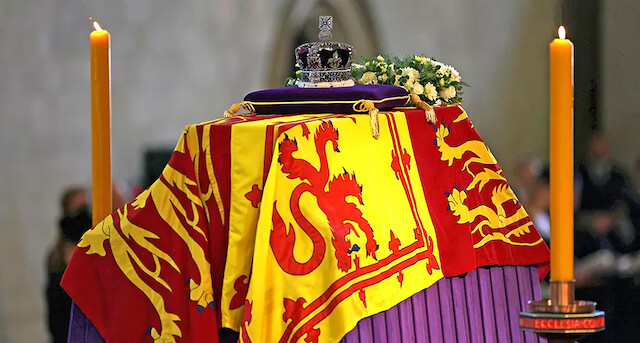 Various members of the public have expressed their shock and sadness at the death of Queen Elizabeth II by saying they thought she would be there forever. She was certainly there for a very long time – a life that lasted ninety-six years and a reign of just over seventy. So, while it was clearly irrational to imagine that the Queen would be immortal, you can understand the feeling. Even for those of us who take little interest in the monarchy, there is a clear sense of a historical shift – a tear in the fabric of our times.

That will fade. The press of events, of day-to-day concerns will sweep the intensity of this present moment into the jostle of memories that each of us carries around. Vivid at first, and likely to be long-lasting for many, these recollections will recede into the background. Life goes on – until it doesn’t. The baton has passed from Queen to King, from mother to son. In turn, eventually, he will pass it on to his own son.

So it is for the rest of us. Our batons may not sparkle like the royal sceptre, but which of us does not hope to leave some kind of legacy for those who come after? I am thinking not just of the money, property, experiences, wisdom, values and love that parents might impart to their children, but the marks we all make on the world that impact the lives of others, whether through work or charity or friendship.

“My best wishes for a life that makes a difference.” RIP Mikhail Gorbachev. https://t.co/yQ8KMyxrc4

As someone who is closer to the end of his career than the beginning, I find myself wondering more and more about these marks. The more fanciful hopes of youth have submitted with a wry smile to the accumulated accidents that make up a life – a very good life for the most part. But as children grow up and parents decline and die, the sense of an ending comes into sharper focus. An intake of breath – where did the time go? No matter, really. You always knew in your head it would pass, even if you chose not to believe it for the first few decades.

Perhaps that is wisdom, to realise finally that you can only hold the baton for a short time? The world will still be here, much as we found it, after we’ve gone. Which is not to say that we should not strive to make it a better place; only that to do so, we might focus more on making every day count, even if only in a small way. We are not likely ever to reach the future that we dream of but it is enough to carry the baton for a while and pass it on to others who might, in turn, ensure that it gets to the hoped-for destination.

This entry was posted in Scientific Life. Bookmark the permalink.