Thanks to the paucity of my education and cultural life I have come late to Isaiah Berlin, the noted philosopher and historian of ideas whose thinking provided such a guiding light to the 20th Century. But I’m definitely a fan now. 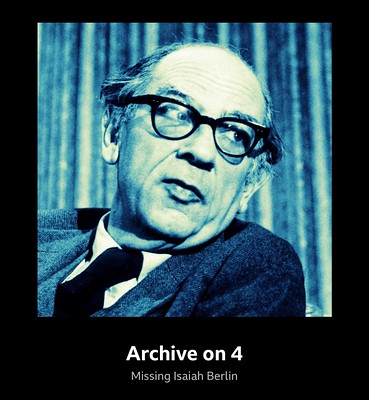 I’d heard the name, of course, but would have been hard-pressed to tell you why he was well-known. I started tracking him down after reading a piece in the New Yorker about philosopher Elizabeth Anderson, whose ideas challenged Berlin’s assertion of the inevitable clash between freedom and equality. I liked Anderson’s notions of “relational, or democratic, equality: meeting as equals, regardless of where you were coming from or going to” and assumed that Berlin had somehow got it wrong.

But I should have looked before I leaped to that conclusion. When I did finally get around to probing Berlin’s thinking, through reading Michael Ignatieff’s fine biography, I found much more depth and nuance and humanity than I had supposed from that single observation in the New Yorker article.

I marked many passages as I read Ignatieff’s book but one of the few that I selected as especially resonant, highlighted in pink rather than yellow, could stand as my personal credo. 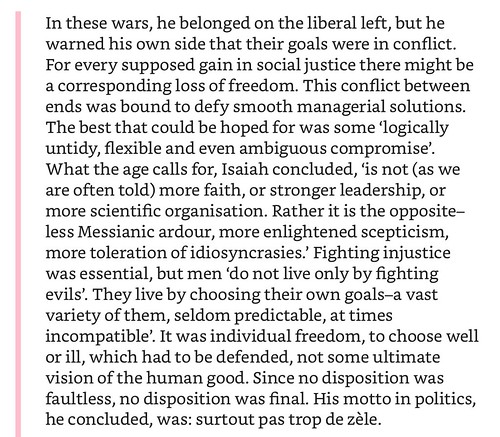 It rang such a sonorous bell I think because I have such a logically untidy mind and aspire, however falteringly, to an empathetic approach in debate and decision-making. “Empathy was, for Berlin,” Ignatieff writes, “the core liberal aptitude – the capacity to be open, receptive, unafraid in the face of opinions, temperaments, passions alien to one’s own.” Well, quite.

It’s an outlook I’ve tried to bring to discussions of open access and research assessment, but also, perhaps more critically, to work to address some of the challenges around equality, diversity and inclusion (EDI) at my university and within higher education. EDI is steeped in conflicting values and perspectives; arguments in good faith struggle to be seen as such, since who you are – your history, your lived experience – weighs heavily within what you have to say.

The idea that the best that can be hoped for is some “logically untidy, flexible and ambiguous compromise” rings true for my experience of conversations about the gravity and impact of historical racism, for example, or the rights of cis and trans women, or where lines are to be drawn around free speech.

Berlin’s thinking is founded on a deep belief in pluralism and that values are  rooted in history and culture. For him variety really was the spice of life, and of liberalism in particular. But this also means that conflict is inevitable. The challenge is to find a way to deal with a conflict for which there is not likely to be a solution to satisfy everyone. The best we can hope for is for all sides in any debate to engage honestly, to recognise with Berlin that perspective matters (without somehow following the more simplistic ruts of identity politics), and to be able to live with ‘solutions’ that we may not like. For those of us in the majority in our diversifying society, that may sometimes call for the generosity to cede power.

For more on Berlin, I can recommend the recent Archive on 4 radio documentary which explores his life as one of the last great public intellectuals and makes good use of recordings of his uniquely plummy gabble. I particularly liked his description of the qualifications for membership of the intelligentsia: “…belief in reason, belief in progress, hatred of all forms of irrational conduct, together with a profound moral concern for society.”

This entry was posted in Philosophy, Science, Science culture. Bookmark the permalink.