All That Is, by James Salter

In 2013 I was captured, captivated by the spare prose of James Salter’s The Hunters, a story of the tense competition between US fighter pilots in the Korean War. All That Is is similarly spare, and like The Hunters quite a masculine novel, but it is a different beast. 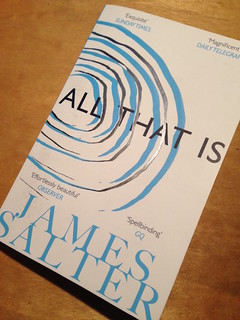 Initially I was concerned that Salter’s compact style might be ill suited to the span of his narrative, which tracks the life of Philip Bowman from his time in the navy during World War II, and through his life and career as a publisher in New York. Salter sweeps through Bowman’s war experience and early post-war years, and loops back to his childhood, in the space of twenty pages. But then I simply fell into step with the author. There was no click; somehow the mist cleared and I recognised a trusted friend.

Bowman’s life unfurls in under four hundred pages. This is a big book thanks to its subject – how to live – but it does’t feel like a big book because of the poetic economy of Salter’s prose. He writes of the efflorescence of Bowman’s first deep relationship: “It was love, the furnace into which everything dropped.” The surety of such observations and the elegant, almost unseen, architecture of Salter’s writing permeate the novel; only very rarely does the poetry seem forced.

The style is all of a piece with the self-confidence that grows within Bowman as he sees himself forging a path through life, both in his relationships with women and his developing professional prowess. And yet, he is never quite in control—he and the people around him are buffeted by events—and nor can he completely understand or connect with the people who fill his life. There is a plangent note of loneliness that seems inevitable but has somehow to be confronted.

All That Is is a rewarding read. James Lasdun’s review goes into more detail on the themes explored in Salter’s narrative and is pretty much on the money.

This entry was posted in Book Review and tagged James Salter. Bookmark the permalink.

7 Responses to All That Is, by James Salter