The moonshot power of Google’s new ‘Solve for X’

With ‘Solve for X’ Google is half way to becoming as evil as the bankers. 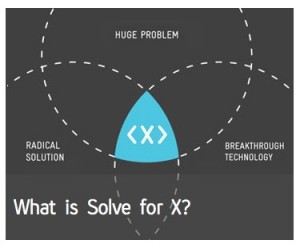 Solve for X is being touted as a kind of techno-think tank, like TED but done cloud style. It advertises itself at its launch today as “a place where the curious can go to hear and discuss radical technology ideas for solving global problems” and the aura of glamour around it is already impressing influential commentators.

But while Solve for X wants to fix the planet, it has all the intellectual depth of puddle. This might not matter if it were merely another weapon in Google’s growing armoury of lobbying weapons. But the closer you look at it, the more sinister it becomes.

The blurb for Google’s latest baby makes a lot of a moonshot metaphor, saying, “This combination of things – a huge problem to solve, a radical solution for solving it, and the breakthrough technology to make it happen – is the essence of a moonshot.” But only an American, Russian or Chinese drunk on imperial patriotism could make such a claim.

Even kids like me who dream of being an astronaut grow up to see that there is more to moon races (both 60s-70s vintage and the current generation) than simply an intrepid blend of technology and courage. Super power rivalry. Demonstrating the superiority of a particular political system. Prestige and influence around the world. Nation building. Developing dual use technology that the military wants under the PR-friendly guise of human endeavour. Consolidating the political power of the national leader (ie presidential re-election in the US). Delivering pork for regions with big space bases. Enabling powerful technology institutions and their engineers to rise. Stimulating lucrative contracts for aerospace firms.

To make technology the “essence” of a moonshot is to close your eyes to all these social, financial, military and political drivers, every bit as essential as the technology. The whole metaphor collapses into idiocy as soon as you ask, ‘What problem do moonshots solve?’

But this is not just inept history, it’s a wilful rejection of the true complexity of the world. Solve for X tells us the world is an algebra of precise curves that can be processed by Google’s corporate leitmotif, an algorithm. But as Kant said, “Out of the crooked timber of humanity no straight thing was ever made”. As in Anna Karenina, this narrowing of the eyes is bound to prove fatal, in this case to any attempts to truly better the world. A house built on fantasies rather than reality will always fall down, and it’s the poor and powerless who get crushed by the debris (while the firms paid to build the edifice may still, as in Iraq, walk away rich).

But look closer. What exactly is it in the moonshots that Google is choosing not to look at? The role of technology in strengthening the power of both the US itself and of powerful vested interests within the US. This includes the technologists themselves, some of the most influential of whom are now holed up in Google, and from whose elite ranks are drawn many of the speakers for Solve for X. The first four in the website’s list are identified as the McMorrow Associate Professor of Innovation at the University of Washington, the VP of R&D at MC10, the Co-Founder and Chief Technical Officer of Oasys and CEO and Chairman of InCube Labs, a life sciences research lab.

Turning a blind eye to power is what makes Solve for X genuinely sinister. It gives carte blanche to these same powerful vested interests to try and bend the world to their will through the medium of technology.

This is the Masters of the Universe mentality of the Wall Street elite transplanted to supercool and equally superrich Seattle. It has served the bankers well for decades. In the hands of the people who make today’s intoxicating and blinding gadgets it may be even more potent. The aspiring Masters of Terra have arrived.

This entry was posted in Politics. Bookmark the permalink.