In which I break through

Sometimes the things you fear the most aren’t as bad as the fear itself.

About two years ago, I gave my first media interview on what was then generally referred to as “the Wuhan coronavirus”. It was still three days before a case would be confirmed in the UK, so most people were thinking of it as a Chinese problem, remote and unthreatening, even the occasional punchline of British gallows humour. I’d already turned down a few approaches from Sky News when the press office twisted my arm, saying it couldn’t find anyone willing to speak out. We didn’t have any coronavirus experts on staff (that’s all changed now, of course, after diverse scientists from multiple disciplines rolled up their sleeves to expand their research questions), but they’d used me in the past for other infectious disease news items and were keen to get the university front and centre in what was shaping up to be a very large story. As I had a PhD in virology and a broad background, it seemed harmless enough as a one-off favour. 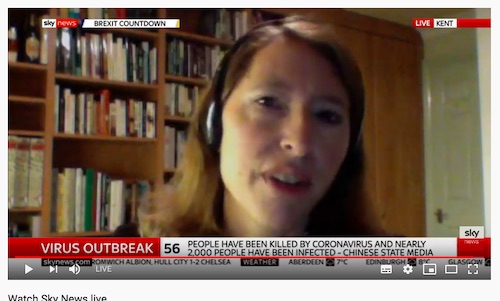 But within a week, I’d given a dozen interviews and was rejecting scores more – they flooded in by email, text, landline, FaceBook and Twitter, until I eventually switched off my phone in despair. It would stop eventually, right? Soon, however it became clear that, unlike all the other topics on which I’d commented, the answer was no.

Fast forward to today, hundreds of interviews later, and I look back on it all from this unusual perspective: the meta-COVID perspective. Whenever I prepare for an interview, I do a lot of research, filling up a few plain A4 sheets with scribbles that I try to memorise before going on air. Every once in a while I stumble over these sheets in the scrap paper pile, or find Joshua drawing on one. They are ephemeral time capsules about a quickly moving target, and I marvel at how obsolete the information is. All those pressing questions, long since answered, even though at the time they seemed so raw and perilous. Will the epidemic reach Britain? Will the epidemic, now arrived, get out of control in Britain? Will many people die? Will coronavirus come back in the winter? Will we need to go into a second lockdown? Will any of the vaccine candidates work? Will the vaccines we’ve bought be enough to end the pandemic in 2021? Will omicron send us back to square one, or herald the beginning of the end? I now wish I’d saved all these notes in chronological order, just so I could remember what we knew when. But of course you never realise you are living through history until you are looking back.

Despite my highly detailed knowledge about the twists and turns in the pandemic story, it was all still rather abstract back in December. But this was soon to change. A few days after my last stint in the lab before the Christmas holidays, I was congratulating myself on having avoided omicron, even though it was already cresting over the capital during my last few commutes on the crowded, largely mask-less Underground. I was quite worried about it, in a way that hadn’t really gripped me before. In this particular snapshot in history, all we knew was that omicron spread like the clappers, but its severity was still an open question. We did know that even people with a booster vaccine dose, like me, could still be re-infected, but we still didn’t know whether it would protect against severe disease. So I traveled around for over two weeks in this knowledge limbo, trading in my cloth mask for an FFP2 and hoping for the best.

A few days before Christmas, I developed a scratchy throat and eventually some congestion, sneezing and fatigue. None of my symptoms were on the allowable list for a PCR test, but I knew from my media research that omicron had a different spectrum and was more or less indistinguishable from the common cold. (One of my time capsules sheets from that period states “one in two cold-like illness in London is actually omicron”). Still, the lateral flow tests, based on a nasal swab, kept coming up negative. By Day 4 of my “cold”, I’d seen a lot of social media chatter about omicron coming up more easily, or earlier, when a throat swab was taken. As the first LFD kits had been combined tonsil/nasal swab-based before the nasal-only ones were phased in, I knew the correct way to sample the tonsils, so I tried it out in the spirit of scientific research, alongside a test swabbing the approved way (nostrils only). The throat sample came positive straight away, an alarming red line that coalesced as soon as the fluid flowed over the test area, while the nasal swab came back negative. A PCR test taken later that day confirmed the positive result.

Two years after those first Wuhan reports, I was SARS-CoV-2 positive. I wasn’t talking about the news: I was the news – especially when my tweet about throat vs. nasal swabbing went viral. (I’m relieved to see that this anecdotal report, one of thousands, is now backed up by actual data.)

How did I feel about joining the COVID club at last? The oddest thing was the overwhelming sense of relief. Although it was always possible that my illness could take a turn for the worst, my time capsules started recording reassuring data about omicron’s severity, first from Ground Zero in South Africa, and then in the UK. Risk of hospitalisation was slashed. The T-cells were mobilising even thought the antibodies were failing. The virus itself was intrinsically less able to replicate in the lungs, preferring the loftier expanse of the bronchi and the nasal passages, where it was better at transmission but less able to cause bodily havoc. I felt terrible, but my cough didn’t get worse; my oxygen saturation levels remained at 96 or above. I was one of millions of people in the UK (up to one in ten in London alone, says Wednesday’s time capsule) with prior immunity coming to the realisation that this particular variant of SARS-CoV-2 was manifesting as a bad cold. I was going to make it. I’m still concerned about how the already struggling National Health Service will survive the coming weeks and months of onslaught, and about potential longer-term effects of infection, but – at least for the moment – I don’t need to worry about catching COVID again myself.

Is this really the beginning of the end for the pandemic? Many people think it is. Others aren’t so sure. With so much of the world unvaccinated, new variants still have the space to breed and ferment. In line with my usual meta-COVID stance, I’m waiting for more data before I form an opinion worth sharing. But my own little COVID story feels like it’s reached a happy ending of sorts – at least for now.

Scientist, novelist, rock chick
View all posts by Jennifer Rohn →
This entry was posted in Epidemics, Media. Bookmark the permalink.