Londoners by Craig Taylor and the A to Z

I moved to London in 2005. After a few weeks living here I concluded that the two most useful things to give a new visitor to the capital would be an Oyster card and a London A to Z. 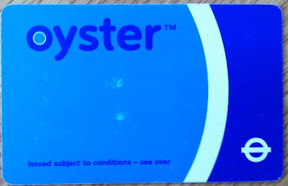 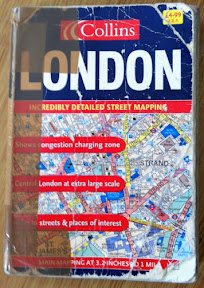 Now, having read it, I add to that list a copy of Criag Taylor‘s Londoners. 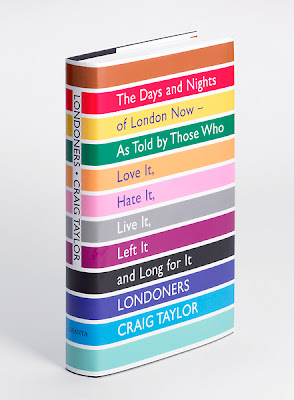 This is the hardback, but the paperback is lighter to carry for reading on the Tube.

I moved to London in 2005. I had visited before, of course. I grew up in a commuter town about half an hour away by train.

Something that confounded me about my trips to London as a teen was that I would ask my dad, say,

Dad, I need to meet some friends at Kings Cross.

And he would say, well, that’s easy, take the Bakerloo line northbound, change at Oxford Circus for the Victoria Line.

He could do this for every journey. I was astounded. Did he really have the entire of that tube map, mapped out in his mind?

I was similarly shocked when, after an afternoon shopping with a friend and her brother, a Londoner, in Covent Garden, my friend and I decided to catch the train home. The brother started walking, and within twenty minutes we had crossed the bridge and were at the station. All those years, I had been buying my travel card, taking the tube, dutifully changing at Picadilly, when I could have strolled there above ground in just as much time. Something you don’t learn about London, until you spend a lot of time there, is how close to each other many of the central sights really are.

So when I moved to London, I bought my Oyster card, and my A to Z, and little by little I learnt the city myself. My well-loved London street map is now, sadly, used less frequently – for that we can thank online maps rather than my subliminal assimilation of The Knowledge. Nonetheless, my copy remains a history of my time in London. Far from maintaining it in pristine condition, I annotated it, scrawling in the margins when I looked up an address I was going to visit. 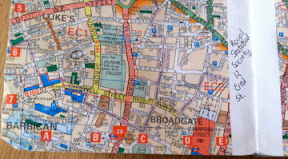 Not everywhere I visited was as scholarly as this.

Over time, my map because a history of my time in the city. As I explored further, my annotations became helpful. They aided orienting myself in London’s sprawl – I could look up a new address and realise to my surprise that I had been somewhere a few streets away just a few months before.

In seven short years my map has become outdated. The Westfield shopping centre, for example, does not feature, and nor does the Olympic Park – at the time I moved to London, we had only just won the bid for the 2012 games. 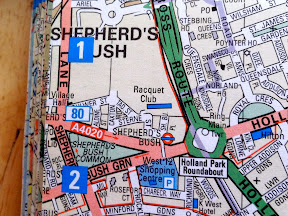 London then:
I wonder what happened to that racquet club? 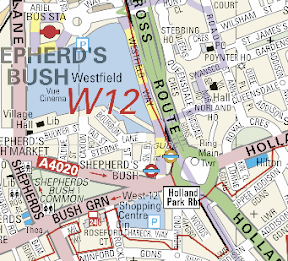 I was reminded of my now outdated map by Craig Taylor describing his arrival in London from his native Canada. He moved to London in 2000, and was given a copy of the map by a friend who had left the city:

I soon learned that for many the A-Z is an article of faith…Printed in the Nineties, my A-Z showed the demolished South Eastern Gas Works where the Millennium Dome now stands. Most A-Zs are half dead, because documenting a city as alive as London will be an impossible task.

The introduction to Londoners is the only extended passage of this book written in Taylor’s voice. The rest is a collection of interviews with Londoners past and present: born-and-bred Londoners and immigrants, visitors and those departing, from students to pensioners and all in between. Taylor interjects occasionally but most of the voices are their own, discussing, rambling, complaining and reminiscing.

What surprised me most was the number of comments that I identified with. The anonymity the city affords, and the extent to which it shapes its transient population, and they, in turn, shape each other. In living here, I have transformed, from tourist to Londoner. When I first moved to London, I lived in university halls of residence, and my local supermarket was on Tottenham Court Road! Like on the Monopoly board, and everything!

TCR now forms part of my commute. I am somewhat less enchanted.

I have come to realise that my dad’s mental map of the tube network was not complete. It covered the most frequent routes out of Waterloo. These days, my knowledge rivals his – I can keep track of a game of Mornington Crescent as well as anybody.

Taylor’s Londoners: The Days and Nights of London Now, As Told by Those Who Love It, Hate It, Live It, Left It and Long for It might make a Londonophile* sentimental. In reading it, a stranger it will get a flavour of what it is to be a Londoner. The Olympics do get a mention in this book, but it is not an official London 2012 souvenir. However, I cannot think of a book that would make a better memento of the capital.

* You can find M@’s gushing praise for Londoners here.