Blogging has been part of my life since 2008. This blog is in its third incarnation:

In spring 2008 I wrote an essay, addressing the question:

How would knowledge of my genetic makeup affect my lifestyle?

My essay won both that competition and the Daily Telegraph/Bayer Science Writer competition in the same year. It was a crazy time. Thanks to H Gee of this parish for the biggest prize of all, arranging for my writing to be published in Nature Futures. 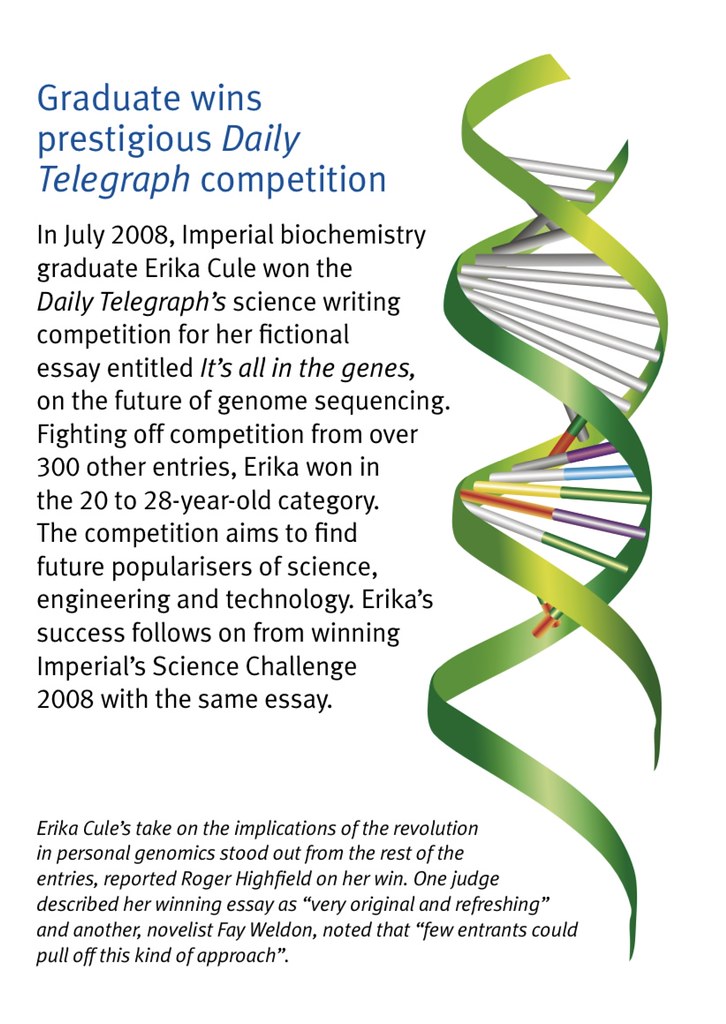 In the publicity surrounding these two victories, I was asked at least twice, do you blog? Do you have a blog? You should have a blog! Right, I thought, maybe I should have a blog. Those were the days when science blogging was becoming a bit trendy in certain circles. Nature Network was just getting started. I was stupidly flattered to end up writing on the hallowed ground of the Nature Publishing Group website, and awestruck by super-cool and assured writers like Jenny, Richard, Bob, and others. Awkwardly for me, Stephen had been my Professor during my undergraduate days where he had given a lecture series on thermodynamics; he was the personal tutor of one of my friends. For me, this added a strange dynamic to blogging social occasions.

I named my blog Blogging the PhD, after a project called Blogging the Bible at Slate in 2006. I had always meant to read the Bible and never gotten round to it. At the time of writing, I have still only read bits of it.

In December 2010, Blogging the PhD left Nature Network to become a founding blog, and hence I a founding blogger, here at Occam’s Typewriter. The science blogging wars of the late noughties left me with some great stories to tell, including a symbolic battle for our collective blog archives fought out by email the night of my upgrade from MPhil to PhD student status. I remain on good terms with all parties.

In the spring of 2011, another honour for me as a baby scientist. I contributed to Seven ages of the PhD, a Comment piece that formed part of a Nature Special on The Future of the PhD. In Seven Ages…, PhD graduates from each of seven dates from the 1950s to the 2010s wrote about their memories of being a PhD student. I was the most junior contributor and the only one who was a PhD student at the time of writing. I consider this piece of writing to hold true as well.

Blogging the PhD is about the transformative nature of the PhD as process. I developed a side interest in this when I was doing my doctorate. This book was a good read. I love PhD students to this day and help them out where I can; ten years on I have yet to supervise one but one never knows.

I changed the title of Blogging the PhD to Blogging Beyond when I finished my PhD in 2013. Incidentally, Nature Network was discontinued in December 2013.

Blogging Beyond is directionless and poignant. I was not able to blog about my work in pharma, and not for the reasons others assume. Corporate intellectual property issues are not the primary problem for preclinical scientists in industry. Our research is tested in the public arena by peer review just like our counterparts in academia. There are frequent academia-industry collaborations as well.

Further, if you are searching for the next big pharma scandal, you will not find it by asking me; please do not ask. Accusing me of big pharma’s various sins makes you look stupid. You know who you are.

The real barriers are the determined privacy I felt over that sensitive part of my life, and also the risk of product promotion. Pharmaceutical companies have strict and frequently updated social media policies because company employees are by definition representatives of the organisation. I was not permitted to make any comment at all on GSK products. Being part of the mental health disability support community was sometimes a tricky dance because my perspective on prescription medication is perhaps idiosyncratic, and because of the symbolic roles prescriptions and the corresponding medications play in the treatment of severe mental illness. I have a lot to say about this topic, and about psychiatric genetics, and am trying to work out whether anything I write will ever help anyone or whether it would only feed inevitable paranoia among fragile people and communities.

The romantic diptych are two of my favourite posts. J is awesome, I commend him to you utterly, particularly should you ever need a high-end aquarium. There is a soft, wistful sorrow in the loss of our marriage, a union which formalised itself with I do and then abruptly, really, really did not.

The descent into mood cycles can be seen in my blog posts, which become chaotic sometimes and present by their absence for some lengthy periods. After I gave in and stopped fighting God over my next steps, the call to blog my journey was clear. In case you are worried, however, I do still have a medical team as I was also concerned about the intersection of faith and mental health. So far it seems to be a healing journey.

Blogging by Candlelight, then will follow Blogging the PhD in as much as it will blog the journey.

Whilst I was exploring my own sense of call, the handful of blogs in which vicars, curates, ordinands congregants and poets blog their own experiences were a lifeline. The exercise is so bizarre and crazy making that those few posts were the only place I found any solace.

This blog, then, is not for clicks, likes or other modern currency, but for me in the writing and for those poor souls after me who get called from outside of faith to serve in the church. The first part of the experience is pretty terrible, but all will work out in the end, or so they tell me.

With specific thanks at the time of writing to: Alabama, Mother Anna, Biarritz, Fiona, all of this parish with special mention to Richard, provocation, the mental health support community on Twitter and local to me in Camden and Islington, and the Coven. My thanks are cumulative and these mentions are in addition to everyone thanked in the acknowledgements page of my PhD thesis, this blog post or this speech and all of my good friends in or formerly of Stevenage, Hertfordshire.