Margaret McCartney at Skeptics in the Pub

Back in 2009, Hal Varian, Chief Economist at Google, said in an interview

I keep saying the sexy job in the next ten years will be statisticians.

More recently, his review of Nate Silver‘s The Signal and the Noise, Larry Wasserman explained

I used to tell people at parties that I am an oil-fire fighter. Now I’ll say: “I’m a statistician. You know. Like that guy Nate Silver.”

If being a statistician makes you sexy, then surely someone who takes an interest in statistics and saves peoples lives as part of her job can assume she has a certain cachet. Earlier this year, I saw Dr Margaret McCartney, Glaswegian GP and outspoken proponent of evidence-based medicine, at Skeptics in the Pub. 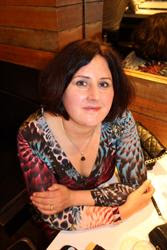 I read Dr McCartney’s book The Patient Paradox: Why sexed-up medicine is bad for your health soon after it was published last year. What impressed me about this book extended beyond eye-opening examples such as Edwina Currie’s admission that breast screening was attractive in political terms, with scant understanding of the impact of screening on the women pressured into undergoing it. Any sophisticated discussion of the benefits and costs of screening processes must incorporate some discussion of the numbers. Concepts such as sensitivity and specificity, statistical power, and false-positive and false-negative rates have the potential to confuse readers. But unlike some other popular science authors, Dr McCartney does not shy away from these ideas nor apologise to the reader for discussing them. Important concepts are presented using sometimes counter-intuitive examples to illustrate the impact on patients. 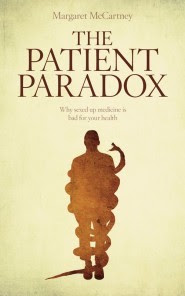 Available from all good bookshops, or from the publisher’s website

If you have a chance to see Dr McCartney speak, then do. (If you don’t, then read the book.) Her talk at SITP included some material from the book. There were some updates that have arisen since the book was published, such as her thoughts on this emotive advertising campaign.

Importantly, Dr McCartney presented http://privatehealthscreen.org, the website she and some fellow doctors launched last October. The site was set up out of concern: the doctors view advertisements promoting private screening tests in the UK as unfair to those reading them. You can read why here. If you or anyone you know are thinking of paying for private screening tests, this website is a useful resource. The site was recently awarded a Good Thinking Society grant.

Compared to the book, the talk at SITP included somewhat more beer, and a lot more swearing. The talk was funny and engaging, and she handled insistent SITP hecklers with aplomb. An in-person explanation clarified several concepts for me, including the difference between screening and diagnostic tests, which I had not really thought about before.

In a discussion about risk with my GP, I mentioned Dr McCartney’s book. At my next visit, my GP said that they had read it, and now recommends to the trainee GPs at the practice. Doctors make decisions based on risk on a daily basis. If both doctors and their patients can become better acquainted with the harms as well as the benefits associated with screening, this knowledge will enable them to make more informed decisions about their health care.

This entry was posted in Book Reviews and tagged Angry Glaswegian, Book review, Margaret McCartney, SITP, Skeptics in the pub, The Patient Paradox. Bookmark the permalink.

1 Response to Margaret McCartney at Skeptics in the Pub