I submitted a physical, bound final copy of my thesis.

Once the corrections to my thesis had been approved by my examiners, I ordered copies bound in regulation purple and submitted one to Imperial College Library. As of March this year, a purple bound copy is no longer required – students submit their final copy electronically and their thesis is made available in Spiral instead. I submitted my thesis for examination in January, so fell under the “old” rules. 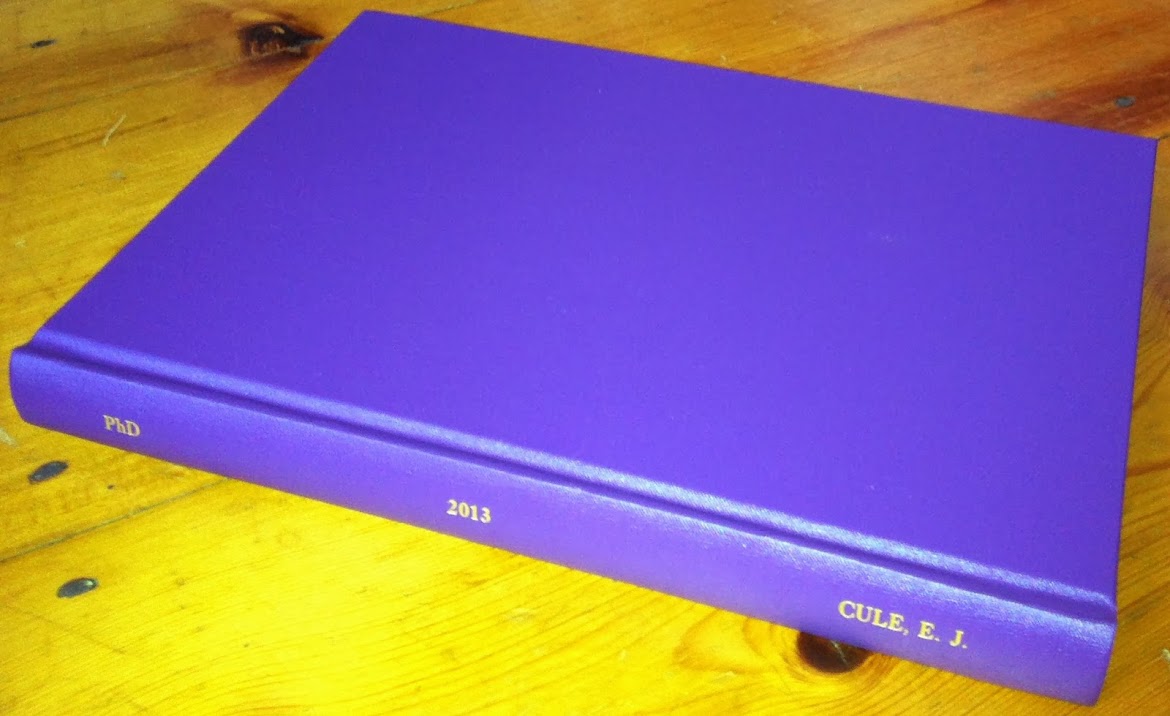 Obligatory photo of the final product.

In July, I received an email awarding me my degree. I was told my degree certificate would be in the post “within three months”. So I was excited when a letter arrived from Imperial College London, addressed to Dr Erika Cule. However, the letter contained not my degree certificate but a mailshot promoting Imperial Alumni Office’s 2013 fundraising campaign. 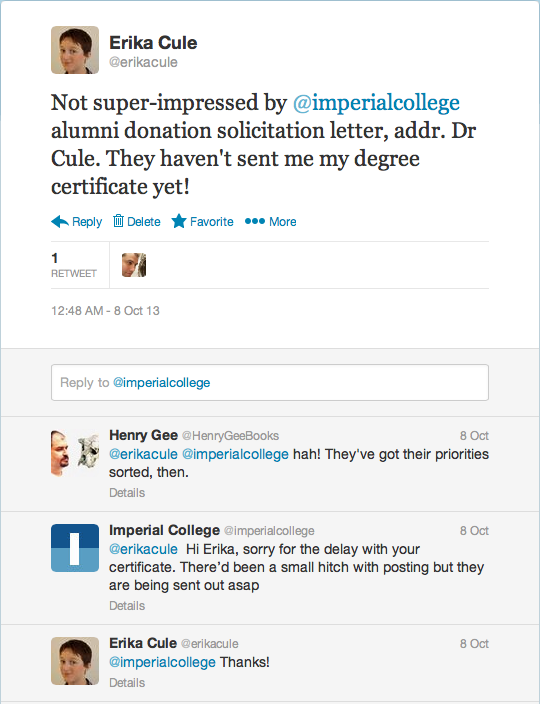 The alumni office emailed me to apologise for this mishap, an apology I accepted. It was clear to me that it was hardly their fault! Moreover, the 2013 campaign will raise money for a Very Worthy Cause which I will be happy to support: the campaign will raise funds for the Rector’s Scholarship Fund, which gives undergraduate and postgraduate scholarships. I feel I curious affinity for my alma mater and would be proud to support the campaign. Imperial certainly gave me a great deal, even if it hasn’t given me my PhD certificate yet, and when I get the phone call I feel inclined to donate, so that other students might have the chances I had.

I had the opportunity to pay it forward in a more immediate and practical sense last week when I went back to Imperial’s South Kensington campus to attend a “Careers speed dating” evening. This event was organised by the Department of Life Sciences for current Biology and Biochemistry undergraduates. I felt nervous, being such a newly-minted graduate myself, but when I turned up on the day I was the oldest alumnus of the undergraduate degree who had volunteered – the other alumni who volunteered had graduated from the BSc between 2009 and 2012. 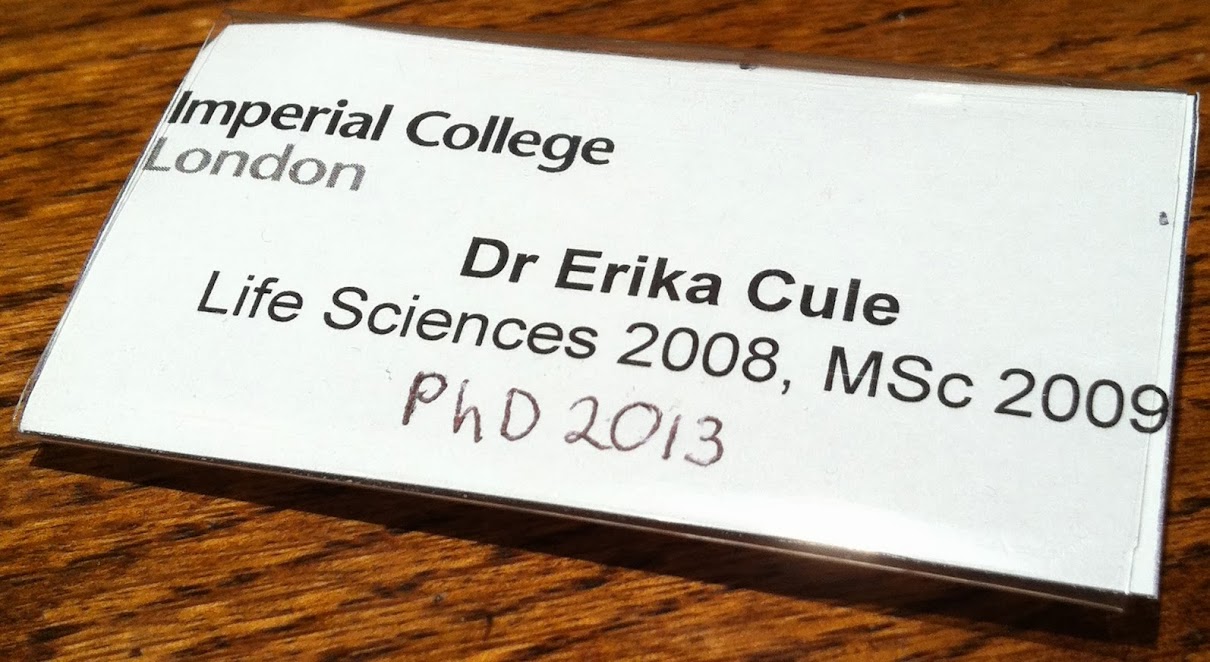 So many degrees, they wouldn’t all fit on the nametag.

Despite the economic downturn in the intervening years, we alumni covered a range of careers between us, from current PhD students to a teacher and a management consultant. As the name suggests, the format of the evening was modelled on speed dating (I am told, having never been speed dating). Each alumnus talked to a small group of current undergraduates, and every seven minutes a bell sounded indicating that the group should move on to the next alumnus.

It was exhausting! I don’t think I have ever talked about myself at such length. By the third or fourth group of student questioners, I found myself unable to remember whether I was repeating myself or talking to a new group of students, as naturally the students had similar questions for me. I directed a few of them to this blog to read about my PhD experience, so if you are reading, hi! I hope I was positive and encouraging even when I was recounting the difficult bits of my career journey.

At the end of the evening, alumni were given a thank-you gift. 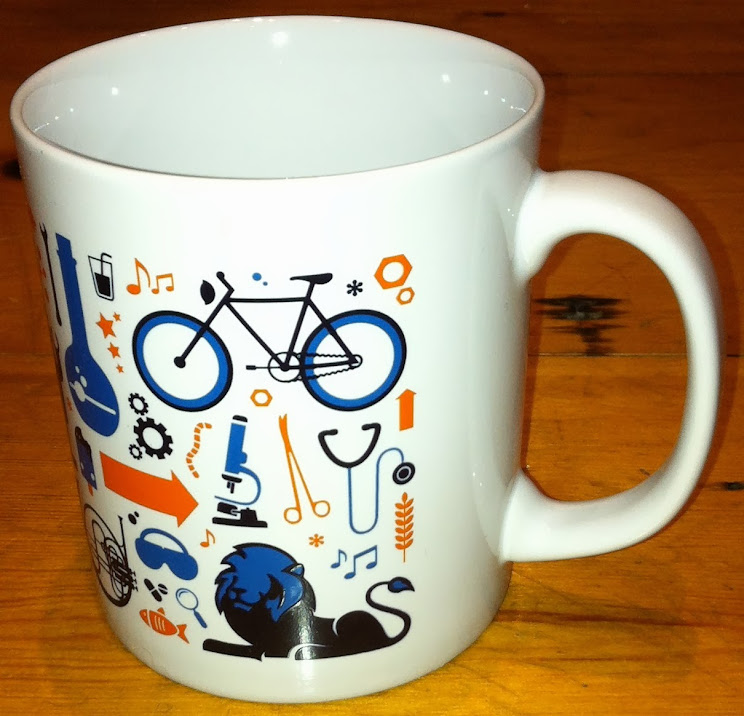 I certainly wasn’t expecting to profit from the evening.

It was a pleasure to spend time with interested students, and to find out how the course I started back in 2005 has changed over the past few years. Hopefully I either answer the students’ questions or, where I couldn’t, pointed them in the direction of someone who might be able to. Thanks to Anita Hall for organising the event. As the evening drew to a close, I felt I had “paid it forward” in a practical way – something I would recommend and would do again. And I still feel I owe something to the alumni telephone campaign. This year, the value of an Imperial College mug, at least.

This entry was posted in Life and tagged careers. Bookmark the permalink.

14 Responses to Paying it forward