All about shes (and hes)

I recently watched the wonderful classic All About Eve – Best Picture at the Oscars in 1951. Its a great film if you like the classics, the language is spectacular ( I am always amazed at the language in good films before CGI where the script was the only thing to really keep your attention), Bette Davis a triumph. I am a not a film critic so will stop there…

And by today’s standards its amazingly outstandingly sexist (but not entirely). For one thing big powerful actress (Bette Davis) gives up her career to be a ‘woman’ in fact Ms Davis has a whole monologue on how you have to devote yourself to being a woman if you want to get married. Its beautifully delivered and even the more ironic as Bette Davis in her real life did no such thing. She did marry but didn’t by any means give up her career. 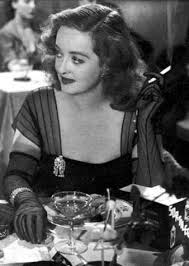 The movie contains all, and I do mean all, of the female stereotypes from the 50s. The mendacious, manipulative career girl who simpers sychophantically and sleeps with the right people to ruthlessley claw her way to the top of the pile. The aged actress who is 42 (42 was aging in 1951!). The gentle, pretty well-meaning (but thick) housewife. The battle axe servant lady who tells it like it is. The film is also complete with a manly slap or a wrestle or two to calm the hysterical women. Stuff you wouldn’t really get away with making a movie today; it’d be too obvious and cause a furor. I am not saying Hollywood ain’t sexist; just that its not so obvious.

Stereotypes still definitely exist today and not just in the movies.
Think about how female scientists, female acadmics or indeed females in any profession, are viewed by the media at large and folks that aren’t (or are) in those professions.

We all know what they are, the dragon lady (ruthless), she slept her way to the top (too thick to suceed on own), and so on. Many of them are age old tropes from back as far as Shakespere (if not further thiking about the female gods in Greek culture), but are still used today. But like more modern Hollywood movies, they usually aren’t quite as obvious as they were in 1951.

Male scientists have stereotypes as well. The one that particularly comes to mind is the absent minded professor. Which is good in some ways, at least they get to be smart, but its not so nice either in fact its quite condescending this idea that if scientists can solve some equation of everything in the universe, they probably can’t tie their shoes. Which is all a bit silly.

I optimistically think these old tired stereotypes must be fading, at least I don’t hear people say such things as often as I used to. Except for the absent-minded thing, but that seems to be applied to women too (what was I saying, sorry I just had a particularly erudite thought). On the other hand, I doubt we have broken out of the stereotype mold, we humans like to type people and catagorize things into patterns and boxes and these stereotypes have been around for a long time.

I don’t have a conclusion to this post, but a question or two.

Girl, Interrupting aka Dr. Sylvia McLain used to be an academic, but now is trying to figure out what's next. She is also a proto-science writer, armchair philosopher, amateur plumber and wanna-be film-critic. You can follow her on Twitter @DrSylviaMcLain and Instagram @sylviaellenmclain
View all posts by Sylvia McLain →
This entry was posted in stereotypes in science and tagged Bette Davis, Stereotypes. Bookmark the permalink.

9 Responses to All about shes (and hes)