I, along with my husband, am the proud new owner of a Regency flat. The pedants among you will quickly point out that there is no such thing as a Regency flat. This is true, but I think I should be given a pass because it is so much easier to say than “a flat in an old Regency-era Terraced building”.

Regency architecture is impressive. Our flat has giant ceilings. It has mouldings. It has 1920’s wall paper (very durable). It has amazing tiled floors. It has Dado rails – a term I proudly trot out on any given occasison that I only learned about a month ago. It even has chandeliers (!). It is also completely covered in layers and layers and layers of paint topped off with a lovely 1992 shade of magnolia.

I used to associate magnolia with sweeping yards of big succulent-looking trees and bad ass mature Southern women who took no crap from nobody. Now, like everyone else in the UK, I only think of emulsion or matt. The only reason I can fathom why this color is called magnolia is that it is precisely the colour of pantyhose adored by old women I went to church with in the 1970s. That darker shade of beige. Incidently, it’s called Savage Ground if you shop at Farrow and Ball, which is arguably a more appropriate name and far less affordable than your garden variety magnolia.

When I was 24, I spent an entire winter helping build a house in the woods. It was my boyfriend at the time parents’ retirement dream and they paid us (not much) to do it up. I needed the money. My job was to hang dry wall (plasterboard in the UK) and finish it (spackle or plaster if you are British). My boyfriend who had two first names as a name – so you really had to call him by both – was a task master. Surprising, considering he was a laid-back hippie raft guide kind of guy, but I got paid and was desperate for the money. Under his tutelage, I acquired some skill by the end of that winter when the raft guiding season started again. I could plaster, sand and paint like a pro, at least in my own mind. I think this experience led me to believe I was some kind of a nascent decorating expert.

“I think I can do a lot of this.” I told my husband. Armed with my pallet knife, masking tape and paint thinner, off I went to tackle my first room .. 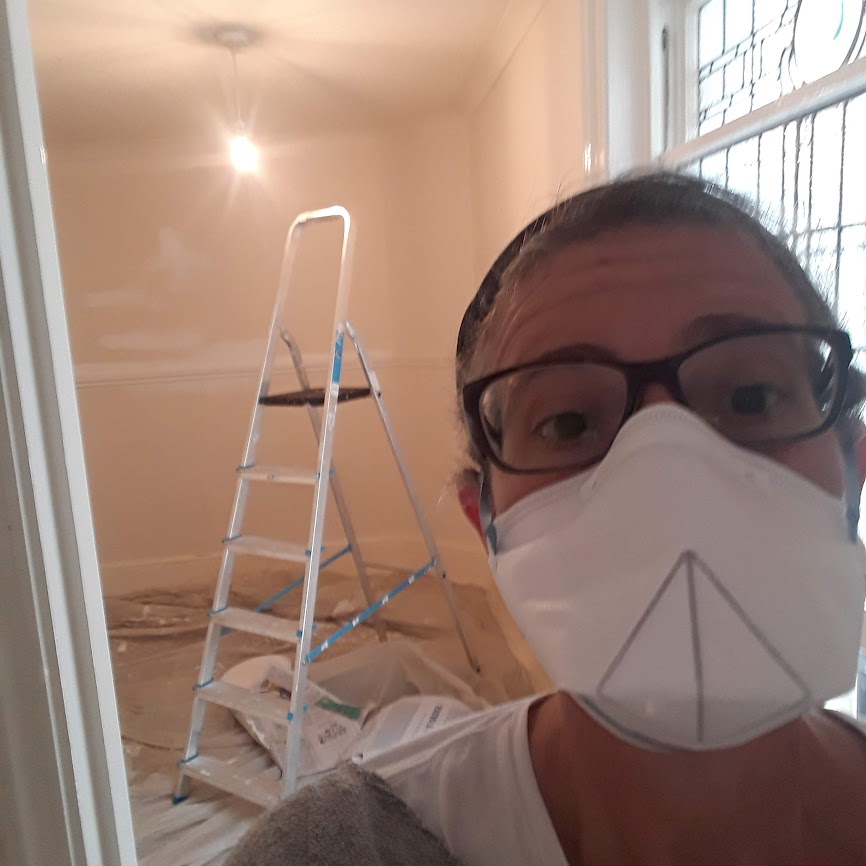 Note the attractive mask, this is because I am a chemist and I used to run a research group so I know about Health and Safety. Also, it is fetching…

This was the back room and I am kind of lazy, so I thought, “I’ll just paint the walls” because Lord knows it needed more paint and ‘I’ll just strip the Dado rail and skirting boards rail with paint thinner and it will be fine.” Being styley, we went for 2 tones and here is what it looked like 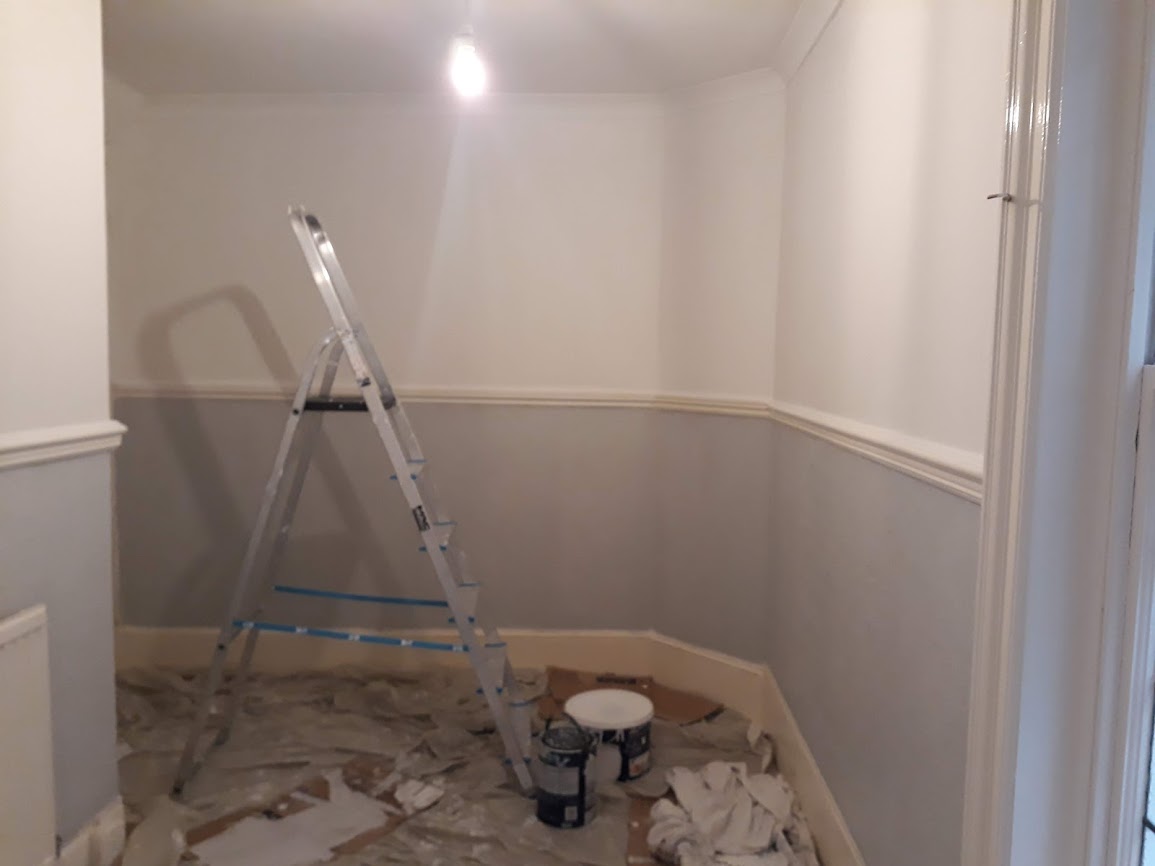 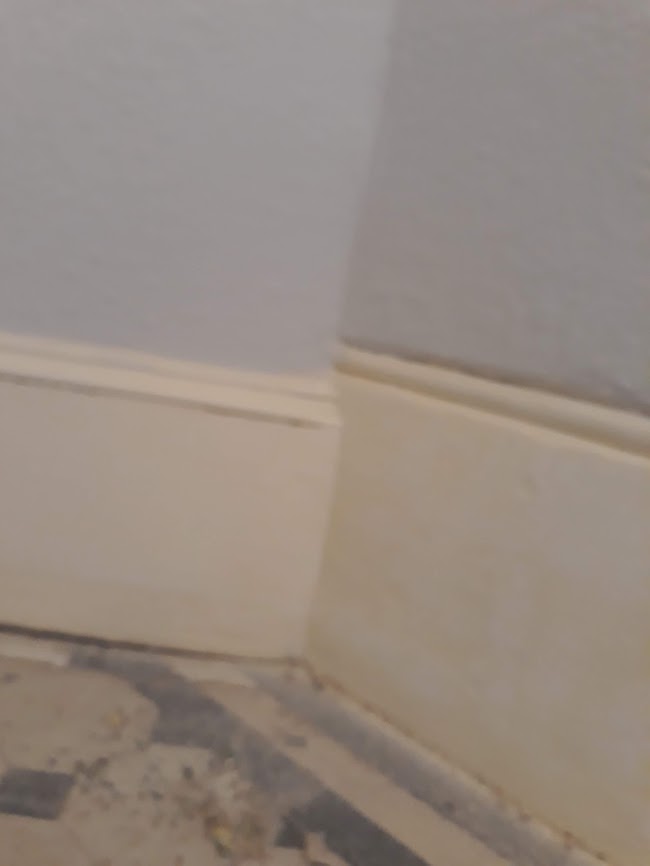 Appropriately clad in my paint-thinning PPE, which made me the prime minister of DIY in my own mind, I applied the first layer of paint thinner, waited the appropriate hour and then applied the second layer. I was looking forward to the scraping, I have just left my career and want to move to another and stripping off old paint in great big swathes seemed just the task for thinking about what next. I mean I could even be some kind of DIY consultant or Restoration expert, why not? I would in 4 or maybe 6 short hours be easily able to have yet another well-deserve evening meal and feel satisfied with my daily accomplishments, where unlike doing science all day there would be an instant result. 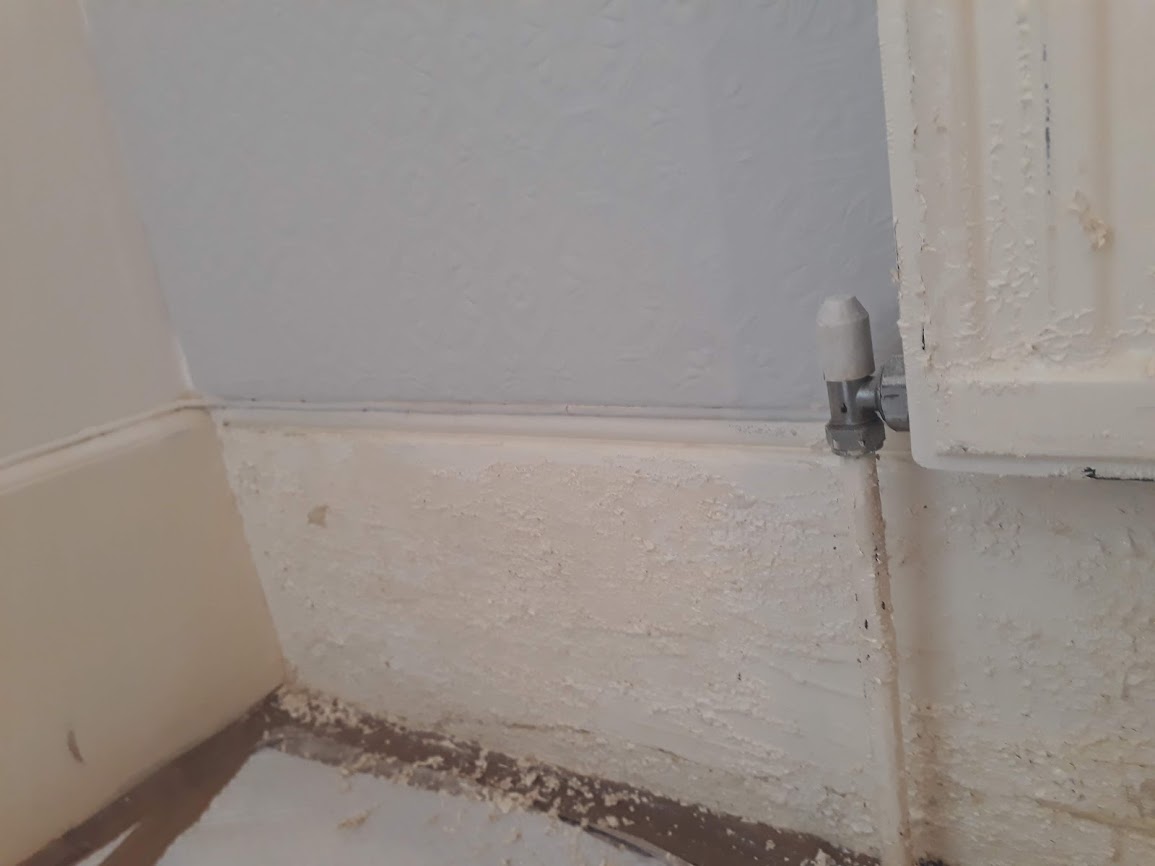 YouTube has about every DIY video you could want, ever. I spent a fun hour procrastinating looking at how to rewire our Regency flat. Unfortunately, you need things like certificates to do this. I found a nice lady, who had all the right equipment I’d like to add, who talked about a *specialist product* PeelAway. I’d link to her but I can’t find her again, maybe I dreamed it or maybe she came to me in a vision after I had inhaled way too much paint thinner, but I found the product. PeelAway is restoration paint stripping magic according to YouTube and claims it can strip away 32 layers of paint in one go! I was sceptical and it’s expensive so I bought a wee 5kg tub of the stuff (£45!) and smeared on our Dado rail.

It is like evil cake icing made of sodium hydroxide and surfactants. It will burn the hell out of you (wear gloves) and try not to smear it on your face when you forget it is caked all over your gloves when you go to push up your glasses. 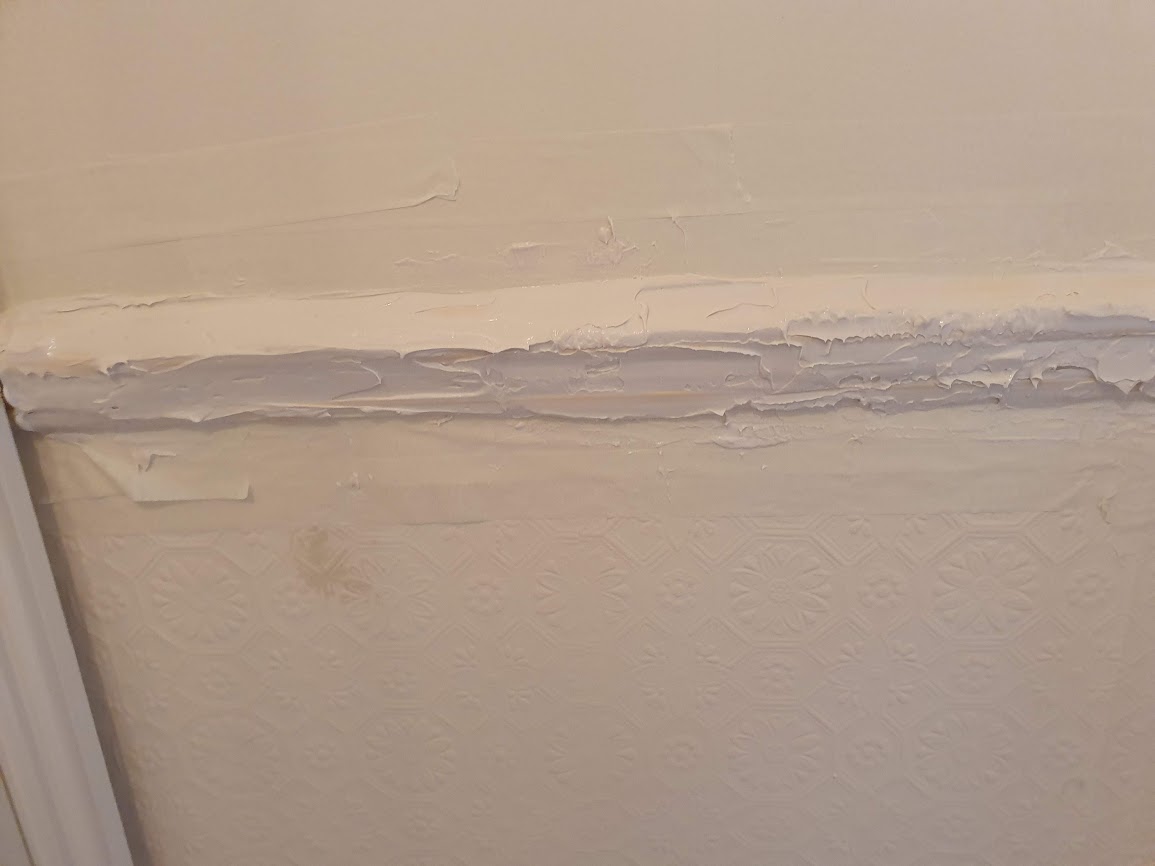 You then cover it with the special laminate sheet, which they call blankets (awww). So cozy, but don’t forget it is evil, evil paste. 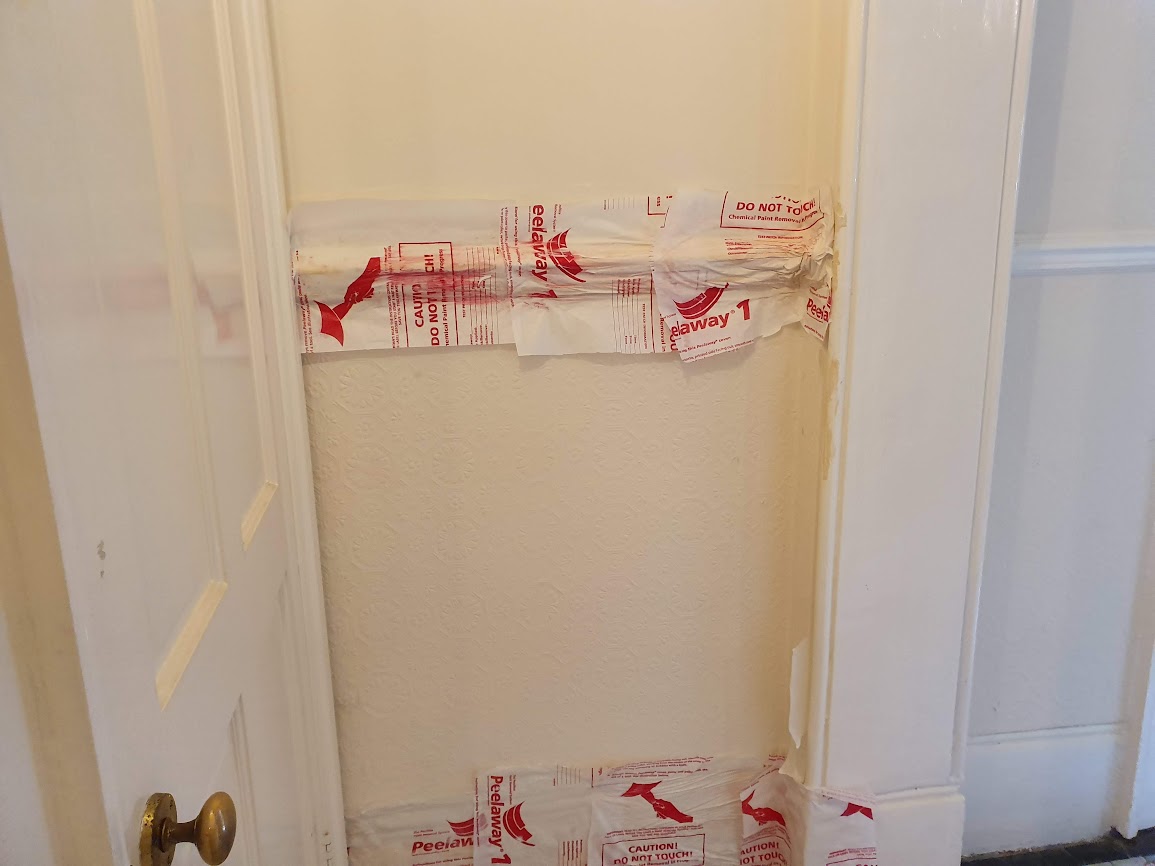 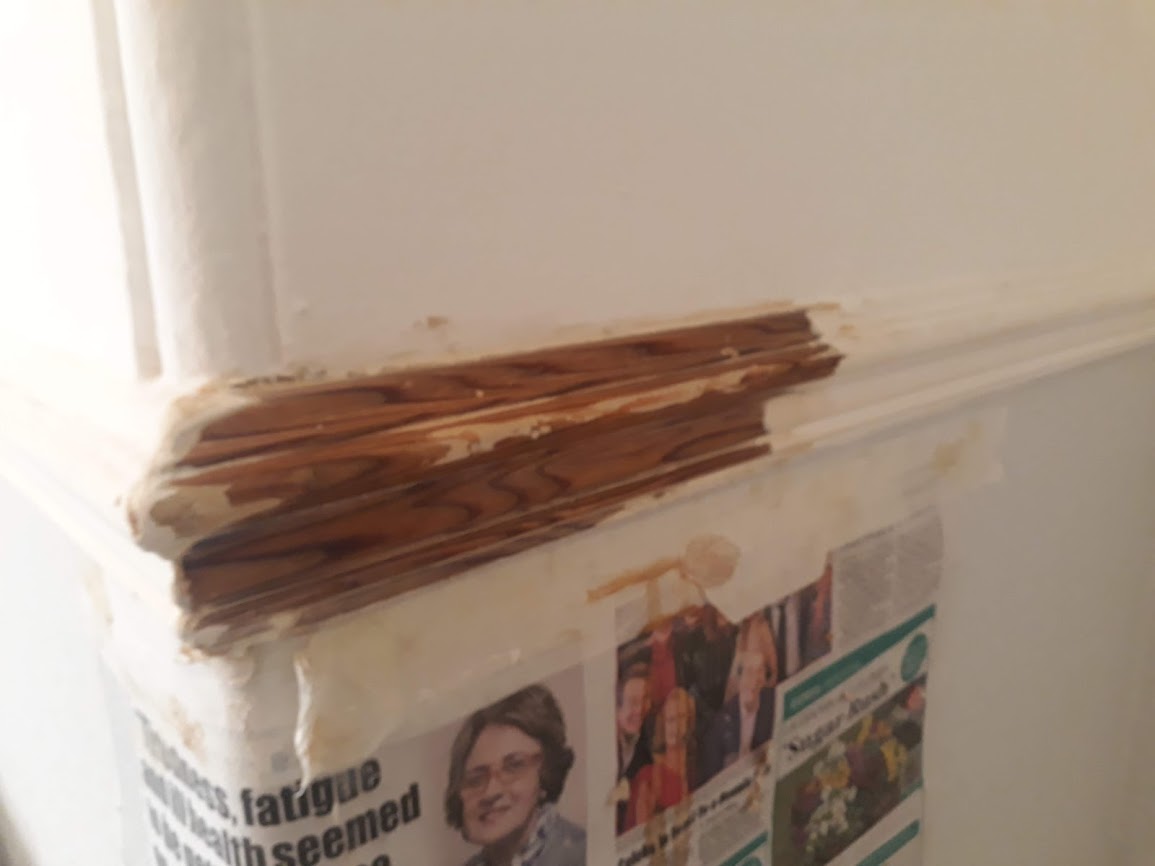 It worked! It is amazing. I used PeelAway1 (for paint before 1972) and I am now an addict. I am selling my old clothes on eBay to support my habit because PeelAway costs around £100 for 15 kilos and you can’t use it sparingly, you’ve got to slather it all over and on your copy of the Daily Mail, just purchased to catch the run off (promise). It is worth it though, and I guess reassuringly expensive if that makes you feel better about it. Now the room looks like this. 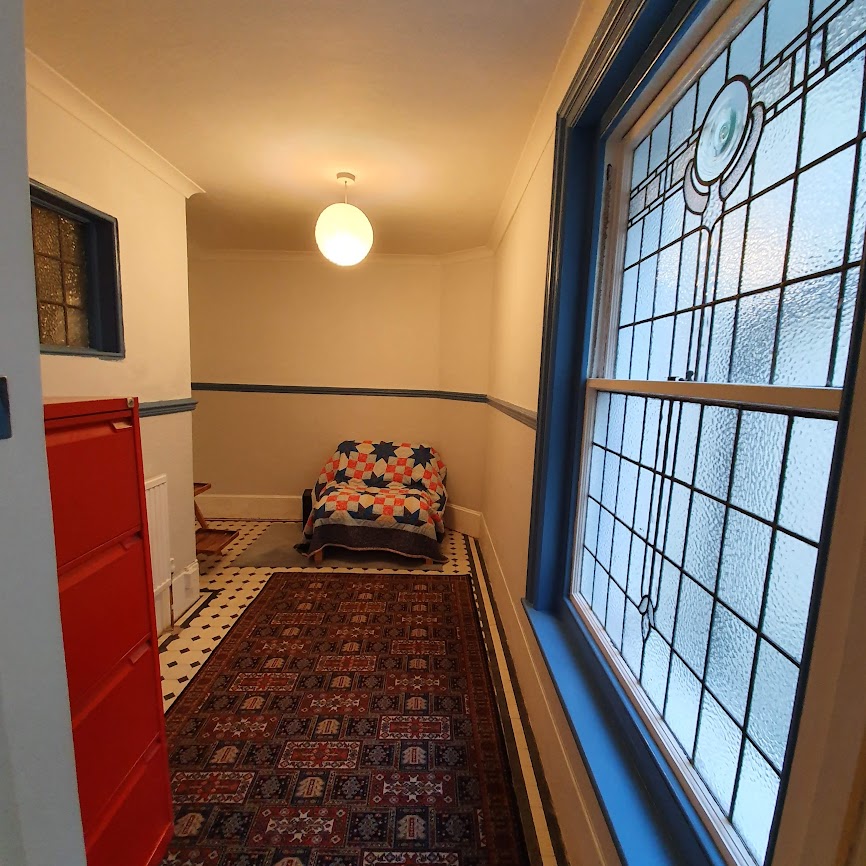 But not without 1001 other steps and backsteps, but those are stories for another day. You will be relieved to know that I didn’t make a YouTube video because I think I am not cool enough and might have just smeared PeelAway all over my phone and decided that not many people would want to watch 3 weeks of sped up mistakes or me in the same paint covered 501s for 3 weeks. I am off to eat my big meal and dream of nice YouTube restoration ladies and magnolia bleeding out into the sunset.

Girl, Interrupting aka Dr. Sylvia McLain used to be an academic, but now is trying to figure out what's next. She is also a proto-science writer, armchair philosopher, amateur plumber and wanna-be film-critic. You can follow her on Twitter @DrSylviaMcLain and Instagram @sylviaellenmclain
View all posts by Sylvia McLain →
This entry was posted in diyqueen, leaving academia and tagged diy, PeelAway., regency restoration. Bookmark the permalink.

7 Responses to Regency restoration – Part 1, use the right product.