The first questioned often asked in a PhD defense is ‘what was your favorite part of your PhD?’

My answer? Building an HF/F2 line. It took me almost a year to complete. I spent the better part of the first year of my PhD acetone squirt bottle in one hand, wrench in the other staring at a vacuum gauge checking for leaks. Tightening a little to stop the first leak only to find the next biggest leak and so on. I can now feather at 1/2 inch threaded tap so that only the tiniest whisper of gas flow can get through that baby. I can also pour liquids from wide mouth jars into a 10p size opening using only a pipette and not spill a drop, which is a great party trick for splitting alcoholic beverages – if you want to know; but this has nothing to do with anhydrous HF and F2.

Why did it take so long? When you are working with anhydrous HF you really don’t want a leak. HF is a gas at 19 degrees (Centigrade) – so if you get a leak (especially in the summer in Tennessee) – out it comes, with a big plume of smoke. HF is particularly dangerous because it is fat soluble and replaces the calcium in your body- which can literally melt you. Acute HF exposure leads to death as after about 10 hours you will die of organ failure. It isn’t pretty. I have had a few HF leaks, but because we were worried about this for obvious reasons, the line was built in a big walk-in fume hood and I had to wear a teflon lab coat. Which never really looked like a lab coat but more like some kind of crazy futuristic wedding dress – my labmates even made me a Kimwipe corsage to go with it. I wish I had kept it, or at least had a picture of the dress. Instead I have a picture of me(or my hands rather) using the line itself (photo op only; hence the absence of PTFE garment and gloves). 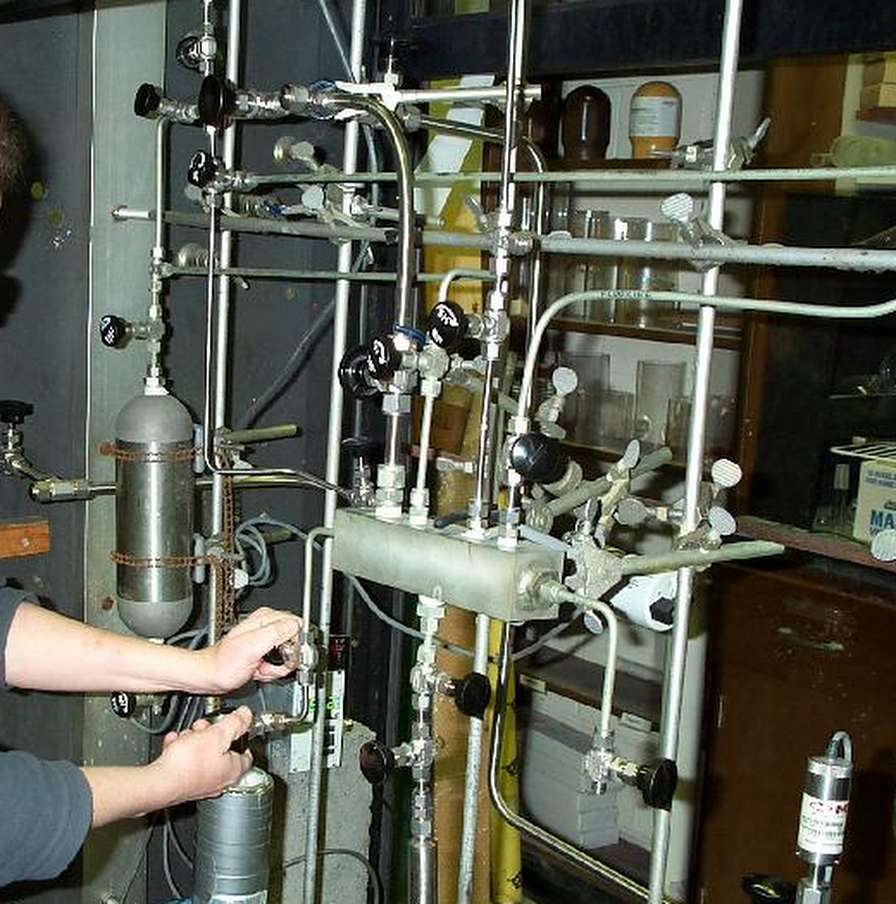 If you ever to work with anhydrous HF and it leaks the best thing to do is shut the hood as fast as you can and run away until it has all diluted itself into the atmosphere. The line design itself is in the literature in Review of Scientific Instruments if you want to read about it and why it is so cool.

The other scary bit is the F2 part. Everything burns in F2 gas. Everything. Even Teflon (which HF doesn’t attack), Everything. But that is a story for another day.

Oh and please don’t try this at home.

Girl, Interrupting aka Dr. Sylvia McLain used to be an academic, but now is trying to figure out what's next. She is also a proto-science writer, armchair philosopher, amateur plumber and wanna-be film-critic. You can follow her on Twitter @DrSylviaMcLain and Instagram @sylviaellenmclain
View all posts by Sylvia McLain →
This entry was posted in HF, laboratory equipment and tagged HF, Lab equipment. Bookmark the permalink.