After a bit of research using the interwebs I have come down on the side of Georgian. When in doubt, remember the Victorians were showy, Georgians not so much. This is all relative, Regency architects were quite happy to thrown in a couple of columns as the ‘less showy’ option. Victorian tiles look more like this (this is not our house – you will note the absence of magnolia). I am somewhat frightened of most Victorian design. I mean look at those ladies shoes, those have got to hurt. Plus corsets and bustles. I remember a friend of mine telling about her future mother-in-law showing her around her newly re-decorated rooms and telling my pal they were ‘Done in the Victorian style’. Before she could think about it she said ‘I thought you were going for frontier Bordello’. I have a similar feeling about Victorian after going to an exhibit of Vicky and Albert’s stuff at Buckingham palace. Who knew how many object of use you could make from antlers, I sure didn’t. My decorating advise would be, if your going with Victorian, do so sparingly or go full-out and open a saloon.

Except for part of our hallway, the bulk of the tiles in our flat were carefully disguised under a I-can-hide-any-stain-even-tea-and-coffee coloured carpet. If you are having a frustrating day, I recommend ripping up old carpet. It is SO satisfying and quick. Thankfully the carpet installers did a pretty poor job adhering the carpet to the floor and the undercoat came up pretty easily with the carpet.

It looks so much nicer than the carpet. This time, rather than being insanely pleased with myself and thinking ‘I’m finished’, I did realize there some cleaning was to be done. 100+ year old tiles weren’t grouted really like they are today. They were just rammed as close to possible to one another on a bed of some kind of cement. They are constructed of clay and according to the conservation folks “When the floors were new, they were generally scrubbed and waxed or oiled every week.” Which is perfectly possible with a load of servants, and I am sure that the great designers of these buildings never imagined a world without servants, even less the horror of a block of flats.

With baked clay tiles which are older than whoever my ancestors were who fled this Island back in the day, you have to be gentle and USE THE RIGHT PRODUCT. I am a chemist, I spent some time researching different substances and they all came to a similar conclusion – alkaline + surfactant. This seems to be a restoration theme, evil basic compounds. I did my PhD work on superacids so maybe it’s nice to spend some time on up at the other end of the pH scale.

I started with some ONE TRUE GOD FAITH Dr Bronner’s. I followed the advise to DILUTE, DILUTE, DILUTE, OK! and gave the floors a good wash. Incidentally, if you’ve never heard of or used Dr. Bronner’s go buy some. It is a great soap, even when you aren’t backpacking and it makes for some good bathroom reading. 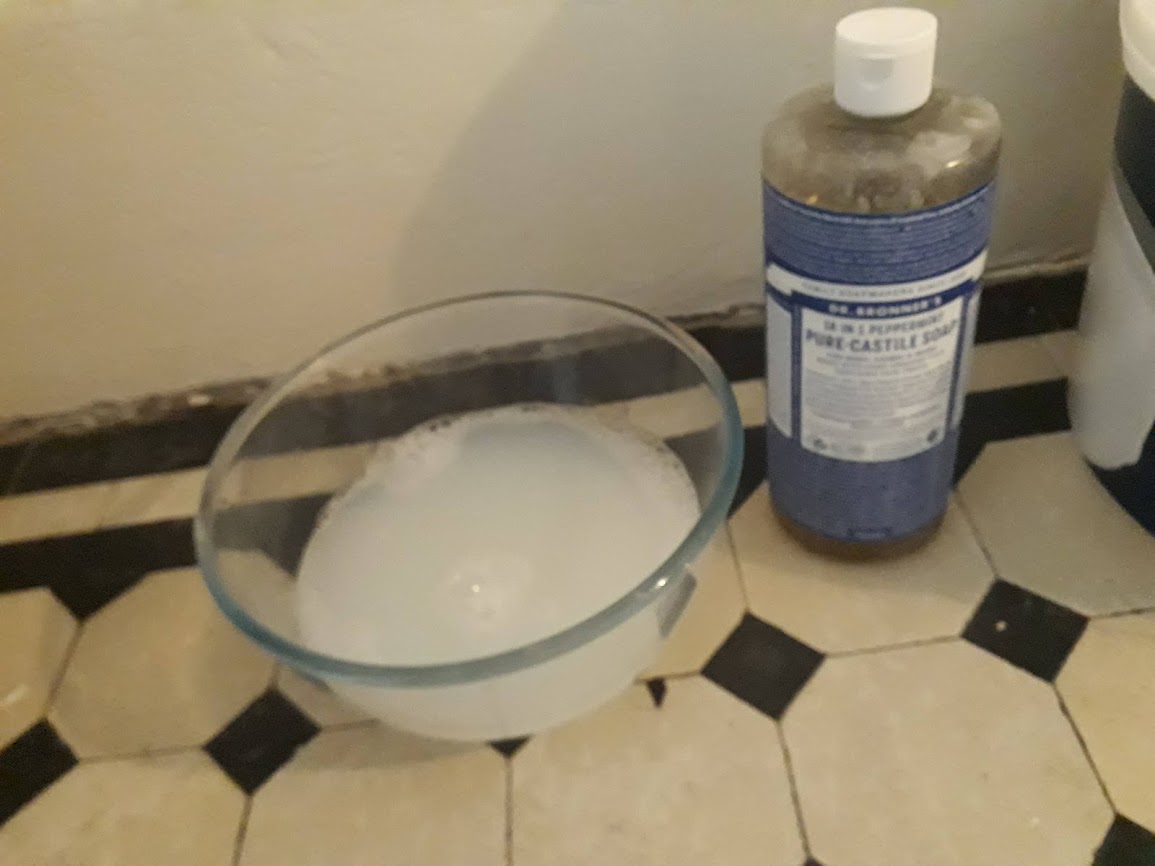 It kind of worked, but it can also be pretty harsh, Dr Bronner’s, if you don’t dilute enough. If you wash your hair with it, you will see what I mean, but basically it will take your luxurant locks and turn them into dehydrated straw. I was a bit nervous about it so I decided to buy the real deal, Vulpex Soap, which apparently they use to restore things like Rembrant’s. Again, it’s not cheap, 250mls is around £20 but a little goes a long way. Plus you’ll have it around if you ever feel the need to spruce up your battle armour as it’s been used for this commonly (according to the label) and it has the Queen’s seal so it must be good. Vulpex rocks becuase you can dissolve it in both white spirit (no not moonshine, though I suspect it would dissolve in that too) and in water. I trundled off to Poundland and secured a trusty Nylon brush for an entire £1 and set about scrubbing.

When it was pretty clear I was going to end up leaving Oxford, I decided to start going to the gym. I’d always been a runner of sorts but I decided powerlifting might be the better way forward (take that Osteoperosis) and to save my ego because I run at exactly 1/2 the speed I used to run when I was in my 20s. Inspired by my husband, who actually can lift heavy objects, I realized it’s far less effort to get tired lifting for an hour vs running for an hour at least for me. I squatted, deadlifted and benched my way into slightly better shape.

This is where I would like to claim I am actually clairvoyant. Sort of like A Prayer for Owen Meany – I must have known that lifting weight would prepared me for something, in this sort of mystical way. In my deep subconscience I knew that having Michelle Obama arms (or Linda Hamilton arms as I like to call them as I thought she was the coolest thing ever in T2) would prepare me for some life experience. I can’t decide if I am sorry or happy to say it was scrubbing 150+ years of dirt off Georgian tiles. This, my friends, is a full body workout. It’s on your knees scrubbing. It is work those triceps and firm up your core kind of painful. It is cardio endurance too, you have to keep going even when you loose the will to pick up that scrub brush one more time, or you’ll be scrubbing till the cows come home or until Brexit is actually over.

“Why don’t you rent a machine to do that?” my husband asked after watching me limp around for the rest of the day (1 room took me 2 days). “I guess because the restoration sites say do it by hand, but really because renting a machine is eye-wateringly expensive” I told him. I then went on to explain my Owen Meany mystical theory. He’s used to me.

Here’s how you do it if you want to know…

Dissolve some Vulpex in white spirit – scrub until you cry (this gets up paint/carpet glue/tape/stuff I don’t want to think about what it really is)
Walk around with a towel under your feet on it. What all the websites definitely agree on it that you can’t leave water pooled on the floor. This is 1) messy and 2) can get under these non-grouted tiles and lift them. Also wear a mask, unless you want visions of nice DIY ladies, then don’t.

Dissolve some Vulpex in water – scrub until you can’t wave your arms in the air like you don’t care and you can’t sit up to get out of bed in the morning because your abdomen hurts so much (back in my day core was abs, I am not really sure what the difference is). Then rinse with water – just on a cloth – no mop, no puddles. Then do the towel walking thing again and it will look like this… 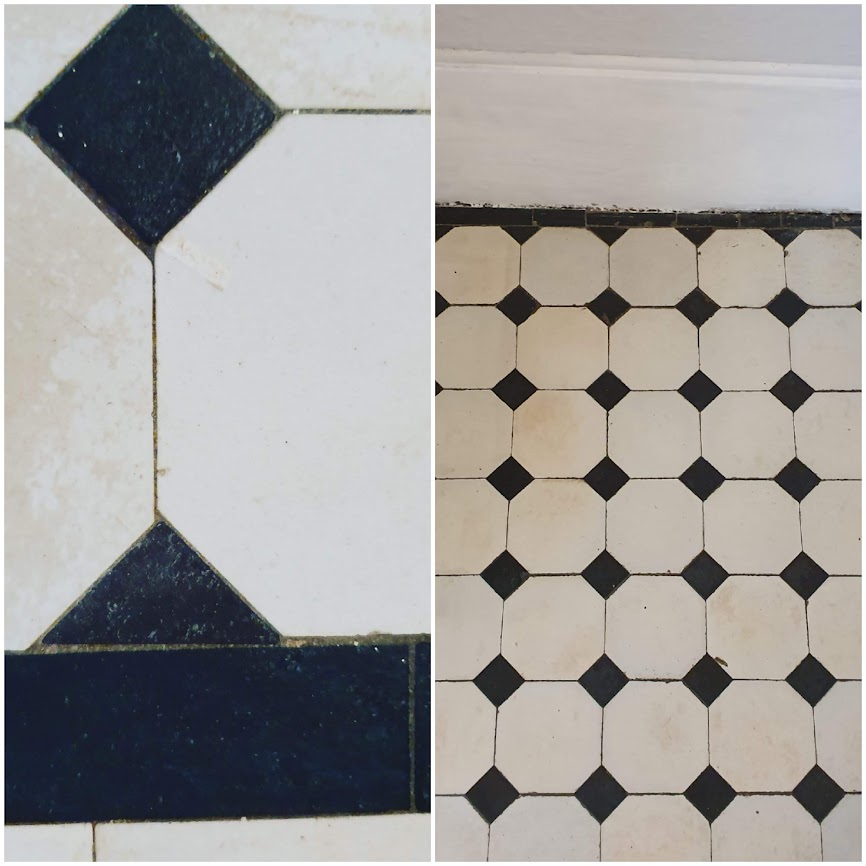 It’s hard to take a picture of a black and white floor which exposes the true horror of what came first. I still need to scrub it again, but that is for another day. Now I am going to work on moving like a slug, because I think that’s the only way I’ll be able to get out of my bed in the morning.

Girl, Interrupting aka Dr. Sylvia McLain used to be an academic, but now is trying to figure out what's next. She is also a proto-science writer, armchair philosopher, amateur plumber and wanna-be film-critic. You can follow her on Twitter @DrSylviaMcLain and Instagram @sylviaellenmclain
View all posts by Sylvia McLain →
This entry was posted in DIY, diyqueen, Regency Restoration and tagged Georgian tiles floors, regency restoration. Bookmark the permalink.