I’ve long been fascinated by Antiques Roadshow, a long-running Televisual Emission in which members of the public bring assorted objets, often of no conceivable use whatsoever except for the accumulation of surplus value, to be assessed and valued by experts. So what we have here (one might say) is a fine example of an early nineteenth-century Shropshire grummet-tinker’s scrode. Now, these things are often hard to distinguish from late nineteenth-century Gloucestershire grummet-tinker’s scrodes, notwithstanding inasmuch as which, late eighteenth-century Herefordshire grummet-tinker’s scrodes, even for the connoisseur, I might tell you, especially if the nadgering-iron is missing its splod-woggle. These things are quite fragile and easily detached. Happily this one is in full possession of its splod-woggle, and is in beautiful condition. Just look at … I hope the camera can see this … just look at the filibustery-work on the lummock flanges. Just exquisite. A piece of this quality and completeness is inestimably rare. I can’t remember the last time I saw one of these come up at auction, but should you choose to sell it … well, how can I put this: have you reassessed your home contents policy lately?

Were I in possession of such a valuable artefact I’d hate to have it lying about the house, just like that, prey to pets, and would rather sell it, or maybe, were I feeling more than usually well-disposed towards humanity — which, mostly, I am not — donate it to a museum.

Now that the Offspring are more or less semi-detached, Mrs Gee and I feel the Winds of Change blowing through our lives. Like birds on the cusp of migration, our lives are tinged with a certain Zugunruhe. The symptoms of this include an elevated amount of declutteration, and I am often found, these days, in the loft, trying to make sense of the gewgaws, tchotchkes and bibelots that have accumulated over the years, and bagging them up so that they might be transferred to the charity shop/ recycling centre/ compost heap.

There are, I regret to say, heirlooms.

My paternal ancestry comes from some shtetl or other in Russia. Imagine Anatevka from Fiddler On The Roof, although dirtier and less tuneful, and my lot were the village cabinet-makers, rather than the milkmen. Some years ago I was given, by an elderly relative, a plastic bag in which were found several old prayer books. One of them — bilingual, in Hebrew and Russian, published in Vilna in 1909 — had an inscription in cursive Yiddish, which even my friend A. K. of Ilford, an expert in such things (and fellow alumnus of the King Herod Appreciation Society) could not decipher. We think that the book belonged to my great-great grandfather, one Aaron Israel Ginsberg. Also in the plastic bag were some leather tefillin (much decayed, and definitely lacking any trace of splod-woggles) and a tallit, made of silk, which I wore to synagogue…. but only once, as with every move I made you could hear it ripping, decaying, thread by thread. The tefillin were only good for the trash, but the prayer-books and tallit remain, and are, thankfully, of no monetary value whatever.

We also have a set of six dining chairs made by one of the late Aaron Israel’s sons, known as Grandpa Wolf, and my great-grandfather. These chairs came to us from a different relation, and I certainly hope they aren’t worth anything, as — too late — our puppy has shown such a liking to them that at least one of them is now unusable, at least as a chair. I suppose it could enjoy a second existence as some post-ironic surrealist art piece, you know, like Méret Oppenheim’s Le Déjeuner en fourrure (Breakfast in Fur) — a set of cup, saucer and teaspoon made of fur. In other words, as about much use as (to use an aphorism favoured by Mrs Gee) a chocolate teapot. 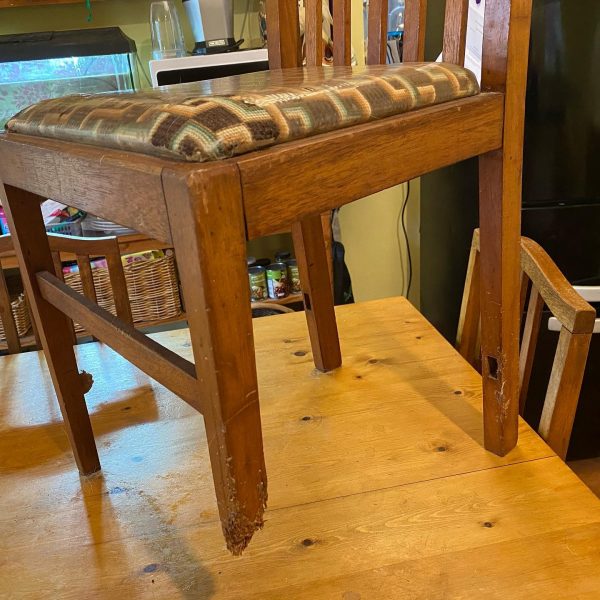 It has now been sent to my friend C. F. of Cromer, an expert carpenter, for restoration. If he can fix this one, he’ll have the other five to work on.

Application of mustard having proven a failure, we have discovered, belatedly, that golden retrievers may be deterred from furniture by application of ‘Flying Goose’ strong chili sauce. This might turn out to have been a less expensive solution.