Oh, these dreams. I don’t know whether it’s the present situation, or the drugs, but I do have the most vivid dreams these days. Sometimes they are photo-realistic … except that the reality is not as one might expect.

Some years ago when these drugs were just recent invaders of my system I dreamed I was in conversation with a close colleague. I’d have sworn it was real except that I knew for a fact that the colleague in question had died some years before.

I recall another in which I was a sculptor, one of five who’d each been given an entire floor of a converted warehouse near King’s Cross Station(1) to display their works. All agreed that David Bowie’s exhibits were the best.

Last night’s though, took the madeleine. I was in a tour group visiting Fallingwater, the famous house designed by Frank Lloyd Wright. This was designed in 1935, in Pennsylvania, as any fule kno, for a Mr and Mrs Kaufmann  (HT Wikipedia). In my dream, though, F. L. W. created it as a retirement home for Abraham Lincoln, just outside Springfield, Illinois. In this reality, Abe didn’t get shot at Ford’s theater, and lived to a ripe old age. One of several surprises was that apart from the famous concrete cantilevered bit over the waterfall, most of the dream house was wooden, like a giant shack, which was rustic, and, given its age, a bit rickety.

In my dream (oh, do keep up at the back)  Lincoln’s later political life was bitter and for some reason or another the burghers of Springfield really didn’t like him at all, so to irritate him they built the State Capitol in exactly the right place so it could be seen from the house — lined up directly with the cantilevered bit over the waterfall — forever reminding the Aged President of political turmoil, in the very place he’d come to forget. Later in the dream the tour group visited Springfield itself and went to dine at a Portuguese restaurant (no, me neither).

The biggest surprise for me, though, was that in my dream I just knew that Springfield was the Capital City of Illinois, which turns out to have been the only part of the dream that matched reality, though, for all I know, there is a choice of Portuguese restaurants in Springfield, a city I have never visited. I’ve never been to Fallingwater, either. I must have learned that Springfield was the capital of Illinois once upon a time and my subconscious recalled it.

This retrieval of random bibelots, tchotchkes and netsuke of knowledge has served me well in my waking life, as it did last year when with my fellow alumni of Leeds University, we conquered all comers to win Celebrity Christmas University Challenge — the first non-Oxbridge team to win this particular iteration of the show, and the first time Leeds has won any version of the show. I learn that it’s going to be repeated on BBC4, though you can find all the episodes on YouTube, if you want to. 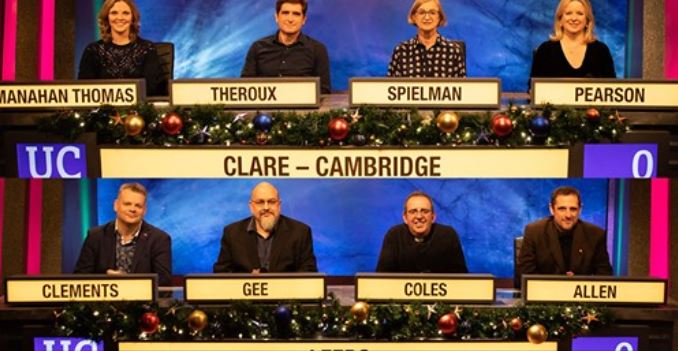 Our victory brought much joy to Leeds University, though I notice that I still haven’t been awarded an honorary degree. In my dreams…

(1) It’s a little known fact that the name of King’s Cross Station has nothing to do with trains, nor indeed crosses, though it is very much connected with royalty. The name is a corruption of that given to the place where, in about 1790, King George III had salt-water ponds created so he could have a fresh supply of Cromer crabs and lobsters for the royal table. Whether this contributed to his famous madness is unknown, but the area soon became known as King’s Crustacean.

Henry Gee is an author, editor and recovering palaeontologist, who lives in Cromer, Norfolk, England, with his family and numerous pets, inasmuch as which the contents of this blog and any comments therein do not reflect the opinions of anyone but myself, as they don't know where they've been.
View all posts by Henry Gee →
This entry was posted in Dreaming, Science Fiction, Silliness and tagged Cromer crabs, dreams, Fallingwater, Frank Lloyd Wright, Leeds University, Portuguese cuisine, Springfield (Illinois), University Challenge, venlafaxine. Bookmark the permalink.