Being the contrarian that I am, I shall defy convention by saying that 2020 has been a year that’ll stand in the tale of years as historical and transformative, for good reasons as well as bad.

True, millions have suffered, in all sorts of ways. Some of them — including people I knew — have died, horribly. Isolation has taken its toll on mental health. Personal relationships have suffered. There has been an increase in domestic violence. Indeed, it would be tasteless to be optimistic without qualification. I am one of those who have stood to benefit from lockdown, and when I think of the blessings I enjoy, my mind plays an as-yet-unmade film by someone like Ken Loach about a single mother on the 17th floor of council tower block, with a baby, a toddler, no employment, a defective elevator, and stairwells full of druggies and smelling of wee.

However, I think that for all these things, tragic and agonizing though they are for those concerned, there are a number of reasons to be cheerful.

— I represented my Alma Mater, Leeds University, in Christmas University Challenge, and, not only that, we won the competition, the first non-Oxbridge team to have done so. To be sure, it was filmed in 2019, but the final was broadcast on 3 January 2020, so just makes the cut. You can watch the final match here. 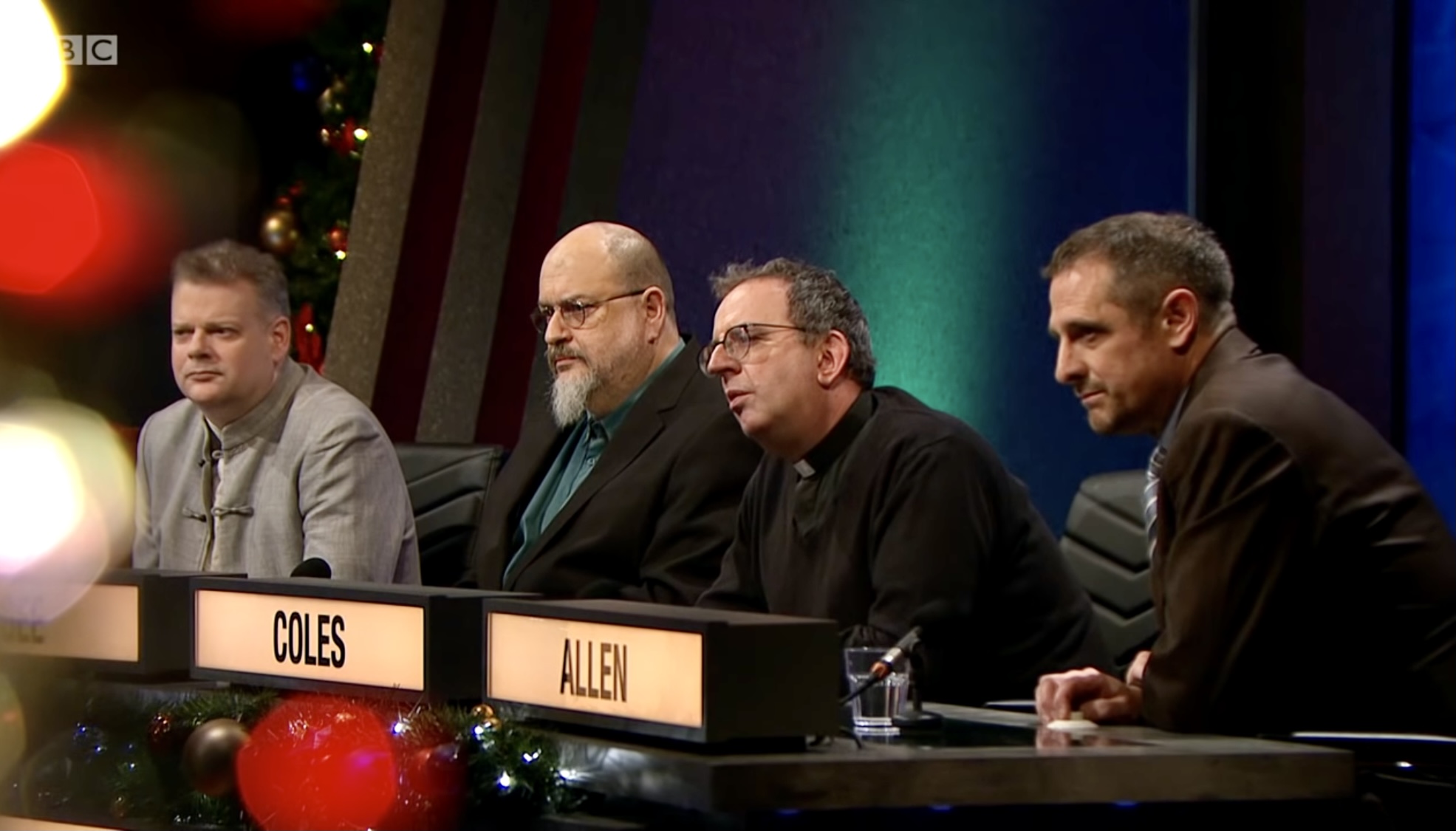 The Leeds Alumni, paying attention. And sitting up straight.

As you’ll see if you watch the clip, we had a lot of fun, and I made some good friends in my fellow team-mates.

— I managed to get publishers for my next book. I am very excited about this, though at the moment it’s still in the editing phase. I should add that I had expert help in the form of my brilliant agent, who closed a UK/Commonwealth deal with Picador and a US/Canada deal with St Martins Press. At time of writing, rights have been acquired for translation into Chinese (simplified), Dutch, German, Italian, Korean, Polish, Portuguese, Romanian and Russian. It should be in the proverbial All Good Bookshops in time for Christmas (2021).

— Lockdown has meant, for me, that working from home has become something I do all the time, rather than almost all the time. I am fortunate in that I am already tooled up for remote working, so my working life changed little. However, the absence of browsing and carousing away from home meant that I saved £££. I learn that I am not the only person to be in such a happy state, such that when the economy bounces back, the bounce might well be both vigorous and high. As shopping was almost completely limited to online ordering, I have perforce been on a diet and have lost weight. People started noticing the new, slimline, go-faster Gee around August, and since then I have lost a(nother) 5 kg.

— Back in the day I played music live very often in my beat combo. I haven’t played a concert with the band since March, Instead, I have become interested (and tolerably proficient) in home recording. Like many in lockdown, I have acquired a new skill. I have even put this to use beyond the comfort and safety of my own luggoles. Working entirely from my home studio, I added some accordion to a friend’s folk song, and also contributed some Hammond organ to the forthcoming single of a band well known in blues circles. So now I am a proper session musician! More news on that as it arrives.

— Just before Lockdown we acquired a new dog. Here she is. 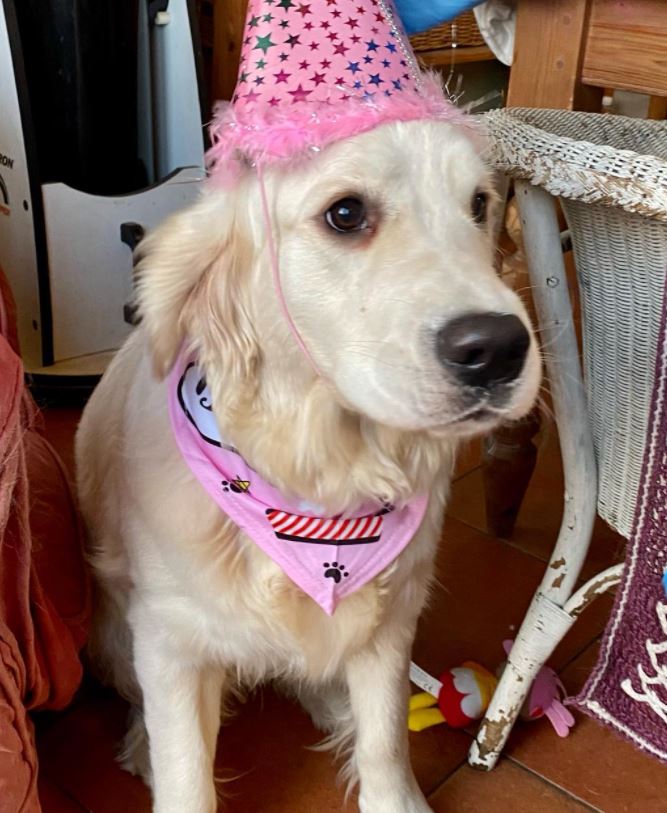 This meant that I got a lot more exercise than I usually do, encouraging me to be more At One with Nature. Again, I am not the only person to have felt the benefits of getting out into the open air.

Turning to more general matters: it is a fact universally acknowledged that pandemics have marked effects on historical trends. The Black Death of 1351, for example, killed so many people that the consequent shortage of labour effectively brought the Feudal System to an end. Thankfully the current pandemic is nowhere near as serious as that, but the effects will resonate in the ways we do things for years to come.

We have learned, for example, that working from home is much more practicable than many had thought, and does not result in a loss of productivity. As a result, we have learned that one’s home address doesn’t need to be within commuting distance of one’s place of work. This puts much less strain in public transport, the environment and worker performance, and might even mean that London — that tumor that sucks a disproportionate amount of  resources into its never-satisfied maw, to the detriment of the body of Britain as a whole — will become less important, and that local economies (and property prices) will become more equable across the nation, offering more hope and opportunities for younger people, especially.

Taking a longer view, the pandemic should revolutionize education. With the increase in remote learning, educationalists should be asking themselves whether the traditional methods of classroom teaching really are as necessary as people have thought. They should also be asking themselves whether traditional school curricula are effective means of fitting young people for adult life. Consider: who, as a teenager, really needs quadratic equations? Wouldn’t it be better to teach people what an APR is; how to count their change; and how to fill out a tax return? I do not think that all education needs to be remote, or even should be. After all, there is (so people tell me) some benefits to socialization. As Asimov wrote in this ancient story, school life can be fun.

But perhaps the most important thing we have learned is that it’s possible to create and deploy a vaccine to a hitherto unknown disease within months, rather than decades. In the wake of this pandemic, funding structures will be in the spotlight, and there will (or should be) a bonfire of unnecessary admin. And it’s no bad thing that science has been brought to the fore as a matter of public discourse — and that scientists are being hailed as heroes.

Henry Gee is an author, editor and recovering palaeontologist, who lives in Cromer, Norfolk, England, with his family and numerous pets, inasmuch as which the contents of this blog and any comments therein do not reflect the opinions of anyone but myself, as they don't know where they've been.
View all posts by Henry Gee →
This entry was posted in Apparitions, Domesticrox, Politicrox, Science Fiction, Science Is Vital, Uncategorized and tagged a very short history of life on earth, annual percentage rate, christmas university challenge, education, Isaac Asimov, Leeds University, lockdown, London, pandemic, SARS-CoV2, the fun they had, vaccine, voodoo sheiks. Bookmark the permalink.