What I Read In February 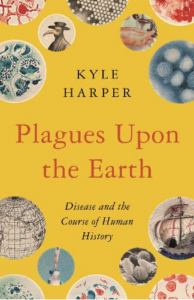 Kyle Harper: Plagues Upon The Earth. Kyle Harper is an historian, specialising in the history of disease. He is specifically interested in the pandemics that swept through the Roman Empire – events that might have changed the course of history. While thinking about that he reasoned that the entirety of human history, not just the Roman Empire, might have been shaped by contagion. Considered as apes, humans, as it turns out, are uncommonly prone to pestilence. Chimpanzees, for example, are strangers to bodily hygiene (they even like to snack on their own poo) and yet have fewer kinds of germs than humans. Harper’s history is divided into several eras. First came our prehistoric past, when we were mostly plagued by worms. After that came agriculture — an unmitigated disaster for human health – in which humans began to live in close proximity to their domestic animals, one another, and the excrement of all. Diseases sprang up that exploited the fecal-oral route, and the possibilities of vector-borne transmission. The Iron Age saw a greater concentration of people in cities, adding respiratory diseases to the mix. Oh yes, and cholera. The Iron Age ended with the Columbian Interchange between Africa, Eurasia and the Americas, with dreadful consequences for all concerned. After that, modernity lurched into view with a greater realisation of the importance of hygiene, followed by the germ theory. For the first time, cities were places where people could safely be born, rather than sinks of mortality that required constant immigration to keep their populations from collapse. Today, people are more likely to die from accidents or genetic disorders than the infectious diseases that exerted such a grievous toll. Depending on who’s counting, there are around 200 viral, bacterial, protist, fungal or parasitic diseases that infect humans, including (in no particular order, as they say in all the game shows) malaria (lots of this), bubonic plague, smallpox, polio, tuberculosis, typhoid, typhus, tetanus, diphtheria, chikungunya, whooping cough. filariasis, schistosomiasis, AIDS, influenza, amoebic dysentery (other causes of life-threatening diarrhea are available),  SARS, MERS, Lyme disease, leishmaniasis, syphilis, sleeping sickness, Chagas disease, bubonic plague (did I mention bubonic plague?), measles, leprosy, West Nile Virus, Zika, Ebola, Giardia, guinea worm, threadworm, roundworm, tapeworm, scarlet fever, lice (both sorts), ticks, mites, fleas … the list goes on and on. There used to be more, but diseases come and go. Nobody knows, for example, the agent of the sweating sickness that afflicted people in England in Tudor times. Therefore, every age has its characteristic diseases. One disease of modernity Harper uncharacteristically omits is Legionnaire’s disease, a symptom of that acme of modern life – air conditioning. Harper hadn’t meant to write this book during the COVID pandemic. That he has done underlines the importance of this book, which one can only feel guilty about for finding racily readable, given the subject. Humans, for all our control of the natural world (and perhaps because of it) are ever at the mercy of diseases. 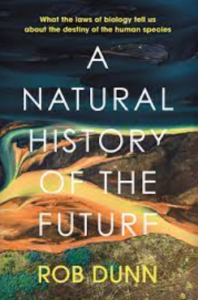 Rob Dunn: A Natural History of the Future. This doesn’t really do what it says on the tin, or, at least, what I expected, which was a prognostication on what life on Earth might be like when we humans are gone (an event which I think will happen sooner rather than later, but, hey, nobody cares what I think). What it does instead is show that despite our imagined mastery of the world in which we live, or, if you are Paul McCartney, the world in which we live in, life has a way of challenging us and adapting to the circumstances offered to it. Human beings are evolving – and so are the animals and plants unfortunate enough to be sharing it with us. To be sure, many of the latter are disappearing, but a few are adapting to our presence. Just as it is the human lot to be burdened by an uncommonly large number of diseases (see above), an enormous number of animals and plants depend on us for their existence — even exploit it. Did you know that there is a species of mosquito adapted to life in the London Underground? I still remember my first ever tutorial at University. It was with an ecologist. I remember little about the tutorial except that the tutor had, on his wall, a poster of fish eating ever-smaller versions of themselves, with the caption THE FIRST RULE OF ECOLOGY: THERE IS NO SUCH THING AS A FREE LUNCH. The modern human world mightn’t look much like a savannah or a rainforest. But the laws of evolution and ecology apply in cities and parks just the same. 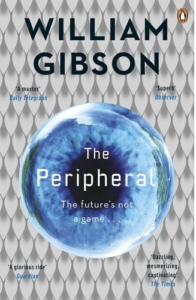 William Gibson: The Peripheral. And now for something completely different.  In a mildly dystopian near-future rural America — think of The Dukes of Hazzard with 3-D printers —  Burton Fisher is an ex-combat vet who makes money playing in immersive multiplayer games on behalf of rich sponsors. One day he subcontracts his role to his little sister Flynne (she’s Daisy Duke: please do at least try to keep up) who witnesses, in the game, a brutal and somewhat bizarre murder. It turns out, however, that it’s not a game. The murder really was (or would be) committed, in a slightly-further-in-the-future version of London, post-apocalypse (an event known as ‘The Jackpot’). Pre- and Post-apocalypse worlds join up through a fortuitous wormhole opened by super-rich ‘continuum enthusiasts’ to try and find the identity of the murderer and why it might have been committed. The Peripheral is a fun farrago of cyberpunk tropes from the inventor of the genre. It suffers a bit, early on, from sacrifice of expository writing to sheer style. When wearing mirrorshades, it seems, it not always easy to see where you are going.

Henry Gee is an author, editor and recovering palaeontologist, who lives in Cromer, Norfolk, England, with his family and numerous pets, inasmuch as which the contents of this blog and any comments therein do not reflect the opinions of anyone but myself, as they don't know where they've been.
View all posts by Henry Gee →
This entry was posted in Uncategorized and tagged A Natural History of the Future, cyberpunk, Kyle Harper, plagues upon the Earth, Rob Dunn, the peripheral, william gibson. Bookmark the permalink.

1 Response to What I Read In February