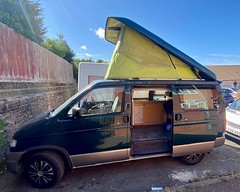 Here is my new toy. It is a Camper van. Specifically, it is a 1995 Japanese-import Mazda Bongo Friendee, bought from my friendly local motorhome and caravan dealer.

Me and Mrs Gee were driving along in our car and I suddenly piped up with the idea that we should buy a camper van. Notwithstanding inasmuch as which we tried a pull-along caravan some years ago, and we had thought of buying a camper van in some vague subconscious way, Mrs Gee said that this was the most romantic thing I’d said for at least twenty years. A few days later, after getting throughly confused by online searches of makes and models and specifications, we just happened to be passing aforementioned local caravan and motorhome dealer and there it was, parked on the forecourt. So we went in and inquired. It came down to a choice between this and a similar Toyota, but we liked the inside conversion of this one more. The dealer was very friendly and helpful, and spent quite a bit of time (with no extra money from me) getting what is after all a rather old vehicle up to spec, installing a modern gas-canister cupboard, getting it M.O.T.’d and taxed and so on.

However, as someone who has never owned a camper van – or any kind of van – there is a steep learning curve to climb. For example, when I flipped the roof tent up (as in the picture) but couldn’t get it down again, the dealer explained over the phone about a lock switch I’d never noticed that had to be engaged, and all was well. Next week I am taking the van in to have a minor electrical loose connection fixed, and to have a lesson on how to use the gas burner.

Now, I hadn’t meant to write anything about this at all, but was prompted to do so by Stephen’s post on his confusion occasioned by the possible purchase of a electric bicycle. Acquiring some new piece of kit in a sphere of activity with which one has hitherto been unacquainted can cause some anxiety. It’s rather like being a new parent, when you are never sure if a child’s sniffle is just a sniffle or a symptom of something more serious. With my van, I have found that no amount of online searching and helpful YouTube videos (and some have been helpful) substitutes for in-person advice either from my dealer, or from friends who have camper vans and motor homes who are eager to offer friendly advice, and who are of course thrilled to have another member of their fraternity.

And so, adventures await. Adventures that we can now indulge in now the COVID pandemic is something that we are beginning to get used to. For example, in 2019 I was due to drive to Hay-on-Wye to participate in the How The Light Gets In festival. I had planned to take book-lover Offspring#2 so we could enjoy both the festival and the wealth of secondhand book-browsing offered by that remarkable Welsh border town. COVID put a stop to that, and the festival moved online. I participated by ZOOM (you can see an example of a talk I gave here, and a panel discussion here). But my short break with Offspring#2 had to be postponed. Until now! I have already booked a pitch on a campsite near Hay later in the year so my promise to Offspring#2 may be fulfilled. For although we are still very careful about COVID — we wear FFP2 masks in all crowded or indoor spaces — this van is our very own COVID-compliant glamping podule on wheels. Other trips, with Mrs Gee, and Offspring#1 are projected.

And there is something else, too — this part prompted by Athene’s musings on a return to meatspace. A part of my job (by day I am with the Submerged Log Company) involves traveling to universities and research institutes and hobnobbing with scientists. Over the past two years I have been ZOOMing in virtually, but having my own mobile glamping podule might allow me to make more in-person visits without the risks of staying in hotels and so on. The future looks bright.

Henry Gee is an author, editor and recovering palaeontologist, who lives in Cromer, Norfolk, England, with his family and numerous pets, inasmuch as which the contents of this blog and any comments therein do not reflect the opinions of anyone but myself, as they don't know where they've been.
View all posts by Henry Gee →
This entry was posted in Domesticrox, How The Light Gets In, Science Is Vital, Travel and tagged COVID, glamping, Hay-on-Wye, How The Light Gets In, leraning curve, mazda bongo, meatspace. Bookmark the permalink.