Darwin and the divine

On Boxing Day, Jerry Coyne posted his blog post The New York Times touts religious miracles as proof of God. In his post, Coyne deconstructs an essay published in the New York Times. The essay by Molly Worthern uses individual testimony as the source material and contemplates the question How would you prove that God performed a Miracle?

Worthen’s title question mentions two important issues. First is that of “proof”, which is really irrelevant to a scientist since we don’t think of empirical “proof” of God—or of anything. We speak of the strength of evidence, which, to me, is strong for the formula of a water molecule having two hydrogens and one oxygen, and far, far weaker for an omniscient and omnipotent being who cares for each one of us.

Coyle says that scientists do not think of empirical proof of anything, which might be true in theory. However, Coyle’s retirement is showing. When a laboratory scientist consults me in my role as project statistician, their project is grounded in the truths of their discipline. Accepted theories allow next experiments to happen. In designing an experiment, we control for the less certain truths but we don’t, for example, let the theory of evolution by natural selection be taken as less than a truth for the sake of our experiments, just because, per Coyle, we cannot consider it to be proven empirically.

What I am getting at is that the scientist at the coalface knows of truth in two senses. They know the truths of their day, theory-as-accepted, language with which to share new findings with colleagues. To an outsider watching the work, this information appears to be certain to everyone involved. The true scientist, though, also holds in her heart that at some stage in the future, current truths might become past theories as new information emerges. A scientist who cannot work with this paradox becomes frustrated and stuck. 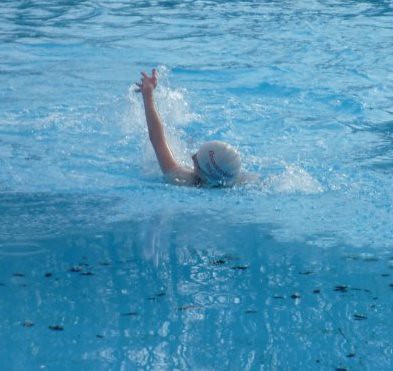 Erika competes in the backstroke at the UK Cold Water Swimming Championships, 2015.

The reference made to the molecular formula of water pierces me in a way that it would not have before. It is the very existence of the water molecule, with its atoms and its properties perfectly in tune with the demands of photosynthesis, respiration, death and renewal, that serve as the evidence of existence of something divine. Long before I became a Christian, I for several years swam round the year outdoors, so central to my well-being. Simple immersion connected me with the changing seasons. Central London life can bypass the rhythm of the year; ice, frost, algae, blossom then crowds, weeds, dying leaves into the ice again were the way I kept in tune. It does not surprise me that much in hindsight that I was unable to thrive absent this ritual and broke down in a life of corporate tyranny and commutes.

Water is symbolic for Christians via baptism; there is holiness also in the making and sharing of a cup of tea. Discernment seems to involve a lot of tea.

I don’t have any particular authority in the faith/science pseudo-divide. I find the conversation boring quite frankly, a bit of a wankfest. Is the earth 6,000 years old or four billion? I don’t care, I’m not a geologist.

Admittedly the evolution by natural selection piece speaks to me more; I cannot not be a Darwinist however hard I try. But I believe that I understand probability theory, why the scientist’s spirit is drawn to the significance test, and what those pesky p-values really mean. I look at all of that, and I look at my soul and its longing. I picture the cygnets and swans on the Serpentine this coming spring. I contemplate the journey ahead. Integrating all of that in both sense of the word, I found my belief in God. I went with Christianity for the simple reason that I was baptised as an infant. My journey began itself around me, before I joined alongside.

This entry was posted in Faith and tagged Darwin, discernment, faith, swimming, water. Bookmark the permalink.