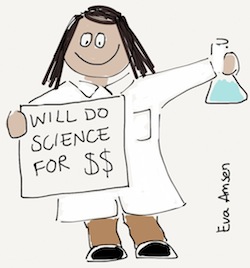 Since I wrote my previous post, I’ve been to SpotOn London, where I attended a session about crowdfunding. One of the panelists was Ethan Perlstein, who is still raising funds for his lab. One of the other panelists was Cindy Wu, co-founder of Microryza, who Skyped in from the US. You can watch the entire session here if you have an hour to spare.

1. Cindy explained what prompted the launch of Microryza. She was working in a lab as a student, and wanted to do an additional project, but the project was too small to find conventional funding. When she told that story, something clicked with me. I was – and still am – skeptical of crowdfunding for entire research projects, but as I said in my previous post, it might work for side-projects, and I found it reassuring that she mentioned that as inspiration.

2. After meeting Ethan last weekend, I donated to his crowdfunding campaign. I don’t really know if I would have done so if I had not met him. I was definitely on the fence while I wrote my previous post, and I was telling myself I should remain objective and unbiased, and that I can’t donate to every project I come across, and I have to draw a line somewhere. But then I met him and he’s really nice and knows what he’s talking about and I just wanted his project to do well, so I pitched in.

That got me thinking: is that exactly the kind of thing that crowdfunding research relies on?

There is nothing material I get in return (other than the 3D methamphetamine thank-you gift), there is no guarantee the project will work. It’s not like pitching in for a Kickstarter campaign for a new magazine (see below), where the money is literally used to kickstart a project that can then start generating its own revenue. Crowdfunding research is basically a donation to someone to do research, and I’m far more tempted to give money to people I’ve met and like than to strangers on the Internet.

3. Several months ago, I donated to the Kickstarter project for Matter magazine. This week, they launched their first issue. Now, Matter embarked on a truly new and experimental way to disseminate long-form science writing. For $0.99 you buy one very well-written article that you can read online or on a Kindle or iPad or other device. Would people pay money for one article? With my Kickstarter donation I got a few free articles, and I downloaded the first one to read on the train this week. It is amazing. It’s scary. And it’s long. Definitely worth $0.99. When downloaded on my iPad it’s a 39-page ebook.

It’s an article by Anil Ananthaswamy about people who have a disorder that makes them think one of their limbs doesn’t belong to their body, and voluntarily have it amputated. It’s strange and alien and graphic. I wanted a hug while I read it (as if my own limbs were not even enough for me) but there were only train-strangers around me, so I just sort of hugged my coat and pressed against the train window. When was the last time an article made you do that?

When I donated to the Matter Kickstarter campaign, I didn’t know what to expect. Nobody did. They raised an incredible amount of money through word-of-mouth. I donated because everyone who I normally agree with on issues of long-form journalism and magazines also donated. We not only wanted things to read, but we wanted there to be a successful platform where longform writing wasn’t ignored. We didn’t know if we’d ever get our money’s worth, but if the other articles will be as good as this one, we clearly did.

Former lab rat, now professional friend of lab rats. I've done research and freelance writing, and currently work in scientific publishing. In my spare time I talk to and write about people who are involved in both music and science. In my remaining spare time I play violin. Sometimes I sleep, but not often. My regular irregularly updated blog is at easternblot.net
View all posts by Eva Amsen →
This entry was posted in Funding. Bookmark the permalink.