Let’s hear it for Thomas Newcomen!

I first heard of Thomas Newcomen soon after we moved to the West Country. I’d been looking around for the names of famous scientists from Devon and quickly came across Newcomen. I was surprised to find out that a man from the small riverside town of Dartmouth was responsible for inventing steam power. In the recesses of my memory I had always associated James Watt with this invention but that turned out to be incorrect. The more I read about Newcomen, the more surprising his story seemed and I wrote a piece about him for a Devon magazine.

2012 sees the tercentenary of Newcomen’s invention. 300 years ago, the first workable steam powered pump designed by Newcomen was installed at a Staffordshire colliery. This is a very significant anniversary as it was the first time the power of steam had been harnessed and one of the first examples of a machine that converted heat energy in to mechanical energy. Dartmouth celebrated this event in July and I fully expected that the main stream media would pick up on this but it is now November and so far the only mention of Newcomen has been in the Channel 4 series “How Britain worked”. Otherwise, I have seen nothing substantive in the newspapers or magazines or on radio in this anniversary year.

More should have been made of this anniversary so I want to take this opportunity to blow the trumpet for Newcomen.

Newcomen is something of an elusive figure. There are no pictures of him so we can only imagine how he looked. We know he was born in 1663 in Dartmouth and died in London in 1729. Throughout his life he was very religious being a member of a small Dartmouth group of Baptists. His wife and some of his business associates came from this group including his partner John Calley, a plumber and glazier. Newcomen trained as an ironmonger and specialised in making all kinds of metal items such as latches, nails, locks etc. He sold some of these to mine owners and on his sales visits he would have become aware of the problem of flooding in mines in the 18th century. As miners dug more deeply for coal they were hindered by accumulation of water that could not be pumped out easily.

For reasons we shall never know, Newcomen decided to try to solve the problem of flooding in mines opting to use the energy of steam to drive pumps. The potential of using the pressure of steam to pump water had been recognised by others, including Papin in Paris and Savery in Devon. Savery had devised a steam-driven water pump in 1698, but the steam pressure possible at the time was not high enough to enable his pump to work in deep mines.

Newcomen realised that existing technology could not cope with pressurised steam so he decided to use steam in a different way. In his engine, low pressure steam from a copper boiler was used to fill a chamber below a piston and then a jet of cold water was injected in to the chamber. This condensed the steam leaving a vacuum. The pressure of the atmosphere then forced the piston down generating a power stroke. The downwards movement of the piston was connected by a massive rocking wooden beam to upwards movement in the mine shaft to drive the pumps. Newcomen automated the engine using a valve system that allowed steam and cold water to enter at the correct time. Most importantly, his invention was achievable with the existing technology and it worked. The first recorded working Newcomen engine was installed in 1712 at a coal mine near Dudley Castle in Tipton, Staffordshire. The machine worked well; the overhead beam rocked 12 times a minute with each stroke pumping 45 litres of water from a depth of 50 metres. The design was so successful that more than a thousand Newcomen-type engines were built. 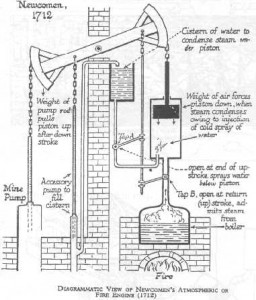 It’s not easy nowadays to appreciate the true significance of Newcomen’s invention. Try to imagine yourself in 1712 gazing in shock and awe at the first Newcomen engine. Life is still primitive; it’s only a century since Elizabeth I was on the throne. If you want power you have to resort to muscle (human or animal) or the elements (wind, water). This new monster is like a dragon, belching steam with its enormous head and tail nodding threateningly at you. And yet it miraculously pumps water out of the mine so that coal can be worked at greater depths. There has never been anything remotely like this new machine, it gets the Industrial Revolution going by making coal more easily available and it has been said that “In the whole history of technology it would be difficult to find a greater single advance than this, and certainly not one more pregnant with significance for all humanity”.

But why do I still find the name of James Watt rattling around in my head when I think of steam power, where does he fit in? In 1763, Watt, an instrument maker, was given the job of repairing a model of one of the Newcomen engines. He quickly realised how inefficient it was, how much coal these engines must consume. This lead Watt to modify the Newcomen design, improving its efficiency. Watt made huge progress in developing steam power and many Watt engines were built. Watt became a member of the scientific elite of the time and it’s easy to see how the name of a provincial ironmonger could be forgotten by comparison. Because he was so successful, Watt is often referred to as the inventor of the steam engine whereas he was actually a modifier and improver.

The next big step forward was to use high pressure steam. This demanded improved engineering and was achieved by the Cornishman, Richard Trevithick. His engines were small and light enough to be used to make steam locomotives and steam railways now became possible. Steam is still used nowadays to drive turbines and generate electricity but none of this would have been possible without Newcomen’s invention.

So, I am surprised that Newcomen has not been celebrated more widely this year. It’s not that he has been completely overlooked. His home town of Dartmouth celebrated the tercentenary with a series of lectures, a community play and new town signs highlighting Newcomen. The Newcomen Society put on a series of lectures around the UK. A replica Newcomen engine at the Black Country Museum was refurbished and restarted and this featured in “How Britain worked” on Channel 4. The extraordinary opening ceremony for the London Olympics featured five beam engines in its “Industrial Revolution” section and Newcomen featured on a “Britons of Distinction” postage stamp.

Although all of this is excellent, I am still mystified as to why the mainstream media and the scientific press have completely ignored the Newcomen tercentenary. I don’t have a good explanation for this omission; perhaps there was too much going on elsewhere with the Olympics, the Diamond Jubilee, the US Presidential race and the Higg’s Boson. Perhaps deep in our scientific DNA we still believe Watt was the inventor of steam power? After all, Watt’s name is used for the unit of power and appears on everyone’s electricity and gas bills. It is also Watt and his financial backer Boulton, who feature on the £50 UK bank note because of the importance of their steam engines for the Industrial Revolution.

Or could it be that we don’t want to address the issue of the Industrial Revolution and the use of coal. This was, after all, the beginning of our love affair with fossil fuels which has got us in to the mess we are in today with climate change. We can’t blame it on Newcomen but we might say that he started it.

After more than 30 years as an experimental scientist, I decided to have a complete change and moved to the West Country. I now write about science for several magazines and web sites and blog at http://philipstrange.wordpress.com/.
View all posts by Philip Strange →
This entry was posted in Guest posts and tagged dartmouth, james watt, newcomen, steam power, thomas newcomen. Bookmark the permalink.

3 Responses to Let’s hear it for Thomas Newcomen!