Another year, another tweet thread of the books I read these past twelvemonth. Click on the images to access higher resolution versions which are just about legible, or better still, read the thread on Twitter.

In 2022 I managed just 20 titles, five of them novels and seven by women. Of the novels I read – all by women, it turns out – the most captivating were Foster and Small Things Like These by Claire Keegan, though Persuasion and Hamnet were both immensely enjoyable.

My favourite non-fiction book of the year has to be Ignatieff’s biography of Isaiah Berlin, which provides not just an entertaining account of his life but a hugely insightful introduction into his liberal philosophy. I continued my explorations of liberalism with A Thousand Small Sanities, Adam Gopnik’s lively account – written for his daughter – of why liberalism is hated by the left and the right. (If you have an appetite for yet more on liberalism, I would still heartily recommend Ian Dunt’s How to be a Liberal, which I read last year). 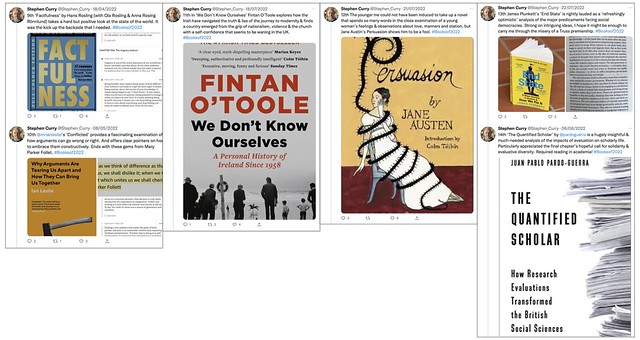 A very close second to my favourite non-fiction title has to be Fintan O’Toole’s personal and sharply observed history of Ireland since the 1950s: We Don’t Know Ourselves. O’Toole is a just few years older than me, and while I grew up north of the border, I have enough connections through aunts, uncles and cousins in the South for there to be many resonances with my own history in Ireland. But many revelations too – I never realised Charlie Haughey was such a crook! 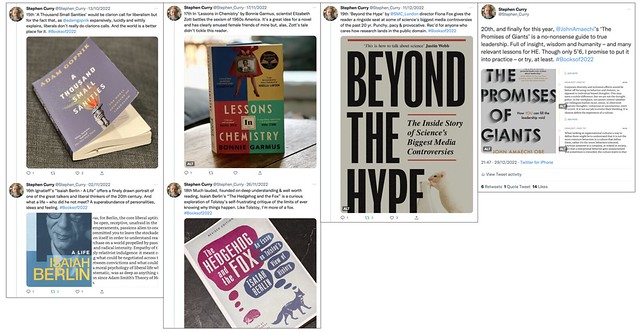 Several of my non-fiction choices I read for instruction and of these by far the most helpful were Ian Leslie’s Conflicted, a thoroughly researched examination of how to resolve arguments, and John Amaechi’s book on leadership (The Promises of Giants), a work so packed with useful insights I was left wishing it could be taken in pill form.

This entry was posted in Book Review, Science. Bookmark the permalink.