On averting a compost disaster

I think everyone should have a wormery but that is probably just because I own one. Its great for compost and easy to use even if you don’t have a garden you can compost away in your kitchen and make your houseplants happy, or just dump it in your neighbour’s garden or in green spaces. You can do this without guilt – its nice dirt that makes everything grow better.

This is my old kitchen wormery; pre-outdoor area 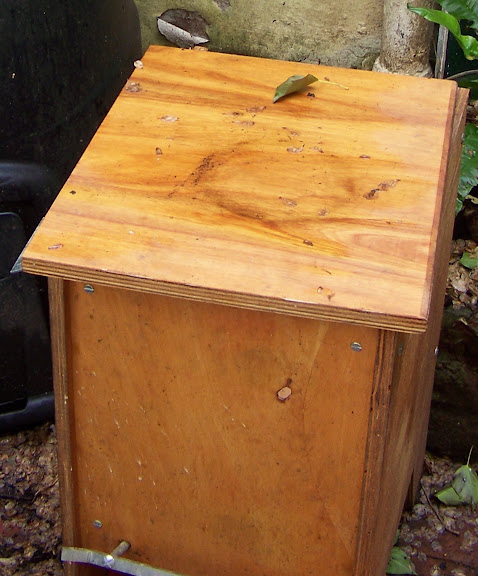 which I purchased from the Recycle Works, Ltd. Its full of Lumbricus rubellus and Eisenia fetida – a.k.a Red, Tiger or Brandling worms. These are proper composting worms, which aren’t the same as earthworms. Earthworms merely move around soil while composting worms actively compost; that is they eat your garbage turning it into lovely nutrient rich soil.

We recently moved into a new flat with a back garden patio (yea!); and we inherited a much larger much more swanky composting bin, which I am particularly excited about, hello lovely herbs and plants – a composting plus! 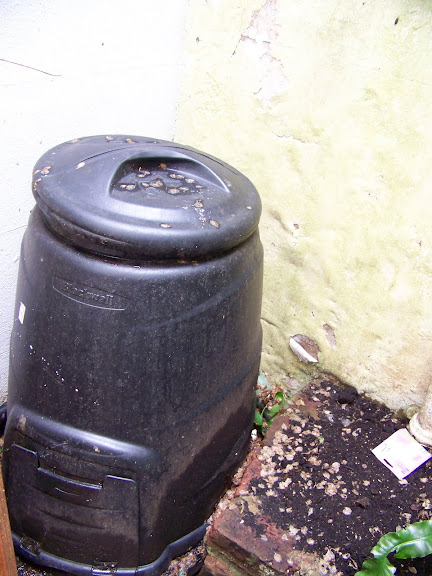 It was full. I gave it a quick stir, as its good to stir/turn compost to keep it aerated so it doesn’t honk and there appeared to be (on the surface) lots of kitchen scraps just decomposing. So I ordered 1/2 kilo of my composting friends to take care of business and left it for a week; usually if its aerated enough, the worms go to town. A common misunderstanding about womeries is that they stink, which they can do if you let them go anaerobic, but if you have enough worms and keep them with good airflow, they just smell like dirt.

After a week I really I opened it. On the surface it seems quite innocuous 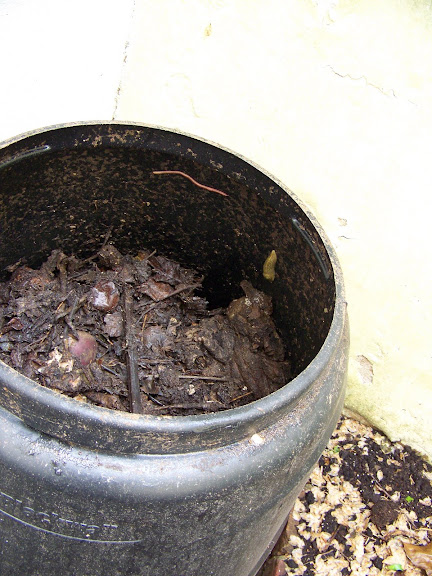 but when I started to stir it stank, not only that but the worms were fleeing. My fine wriggly friends were either clustered on the surface of the bin or were working their way out the bottom and under rocks in the garden. This is definitely weird worm behaviour because basically a womery to a worm is like an all day eat all you like affair – what’s not to love? So I opened it, took a big stick and gave it a BIG turn and what did I find?

Diapers! Lots and Lots and Lots of diapers! Not the gentle lovely compost-able diapers (with no absorbent gel packs) but big hunks of nasty gel laden (heavy!) diapers. No wonder my worms were getting the hell out of dodge, can’t say I blame them.

DO NOT PUT BABY DIAPERS IN A WOMERY! Unless you buy the ones that are especially made for composting and even then you need to flush the actual poo.

Stifling my gag-reflex, I bagged up (plastic bags around my arms) the diaper culprits; this was yesterday and I am still disgusted. I am proud to say though, as of this morning the smell is gone and my new compost bin is already looking healthier.

Want to know more about composting via vermiculture? You should read this book Worms Eat my Garbage by Mary Appelhof or have a poke around Recycle Works, Ltd website. As long as you don’t put Diapers in your womerly, I highly recommend getting one as its great for any gardener or anyone who is just tired of putting food scraps into a landfill.

Girl, Interrupting aka Dr. Sylvia McLain used to be an academic, but now is trying to figure out what's next. She is also a proto-science writer, armchair philosopher, amateur plumber and wanna-be film-critic. You can follow her on Twitter @DrSylviaMcLain and Instagram @sylviaellenmclain
View all posts by Sylvia McLain →
This entry was posted in random and tagged composting, Womery. Bookmark the permalink.

17 Responses to Worms, worms, worms – how to treat your compost…