Back in the early days of the present unpleasantness I was engaged to take part in a literary festival in Hay-on-Wye (no, not that one, a different one). Cognisant that Offspring2 is a keen bibliophile, I thought I could take her along — while I was giving talks and taking part in panels, she could browse the more than thirty bookstores in that remarkable Welsh border town.

But COVID intervened, the festival went online, and Offspring2 didn’t get her promised trip. So, when the Gees acquired a camper van, we pencilled in a trip, and booked a campsite just a few steps away from Hay. Now, this happened a few weeks ago: I’ve only now been able to bring myself to write about the ensuing disaster.

So, Offspring2 and I set off from Cromer, full of joy and anticipation, and listening to the BBC’s hoary old adaptation of The Lord of the Rings on cassette (did I say that the camper is so retro it has a cassette player?)

Well, the clouds gathered just over halfway, on the M42 near Birmingham, when the coolant warning light went on and stayed on, accompanied by a horrible constant buzzing noise. We pulled over and called the AA (no, not that one, a different one). Eventually a tow truck arrived and towed us to a safe place. The driver checked our coolant and topped it up. We decided not to wait for an AA patrolman (this proved to be a mistake) and  pressed on … but it wasn’t long before warning lights flashed; the engine temperature indicator went up and down like the Assyrian Empire; but we were nearly there, so just after dark we pulled in to the campsite. It was called Black Mountain View and was a wonderful place, and would have made for a pleasant holiday under different circumstances. Offspring2 settled down to sleep in the van while I pitched the awning, unfolded the camp bed and snuggled down to sleep. Or, at least, I tried. It was a cold and damp night.

What with the worries about the van (the whole interior smelled of burning rubber) and the damp night we decided to abandon our holiday and try to get home. With the help of the campsite owner (a skilled mechanic) we topped up the coolant again and set off.

Ten miles out, not far from Hereford, we finally broke down. Steam was pouring from the engine. We called the AA again. This time the patrolman had a better idea of the problem – we had probably blown the head gasket. Big, big problem, and the van was no longer safe to drive. 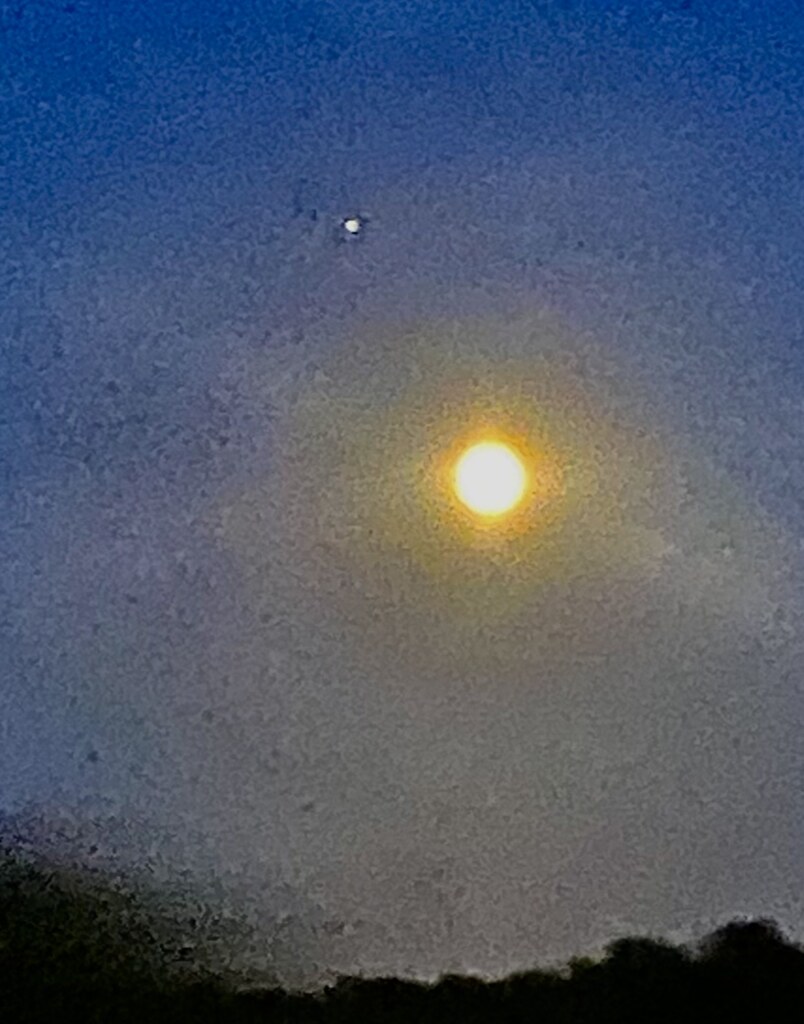 There followed a succession of tow trucks that took us from Hereford in easy stages to the Barton Mills service area on the A11, some 68 miles from home. By that time the Sun had set and the Moon had risen — I took this picture from the tow truck of the Moon and Jupiter. But by then, the AA had run out of tow trucks, and they had to get a taxi. We eventually got home 15 hours after our breakdown. I had to leave the keys to the van at the service station. The van was towed home next day; a couple of days later my garage came to take it to their workshop … and that’s where it is now.

If and when the van gets back to us we might have second thoughts about camping, or at least, anywhere far away. However, the night sky in Wales was so lovely that I can imagine my taking the van to dark hilltops for stargazing with my new telescope. So perhaps, even when I am lying in the gutter (and smelling of burning rubber), I can still look up at the stars.

Henry Gee is an author, editor and recovering palaeontologist, who lives in Cromer, Norfolk, England, with his family and numerous pets, inasmuch as which the contents of this blog and any comments therein do not reflect the opinions of anyone but myself, as they don't know where they've been.
View all posts by Henry Gee →
This entry was posted in Apparitions, How The Light Gets In, Travel and tagged automobile association, camper van, Hay-on-Wye. Bookmark the permalink.