What I Read In December

Richard Fortey: A Curious Boy It was the author himself who recommended this book to me, as he said — and I hope, if he reads this, he won’t mind my saying so — that aspects of his book reminded him of me. And it did. It was uncanny. The geeky boy who loved nothing better than to roam the countryside; to spend time alone with collections of fossils, or insects, but who loved art, and literature, and music, ideas; was allergic to virtually every sport (Fortey played Tiddlywinks for Cambridge University: I represented the University at Scrabble); and who was drawn, ineluctably, into science. And writing about science. And even the same areas of science. Fortey’s Life: An Unauthorised Biography (perhaps his best known book) plows a furrow adjacent to my own writings. However, I suspect that Fortey and I are less long-lost brothers than exemplars of a type: variants of the same species. There are, to be sure, many people out there who will see themselves in this book, whether or not they became scientists — or, as Fortey nearly did, a historian of science. Or a poet. A joyous read. 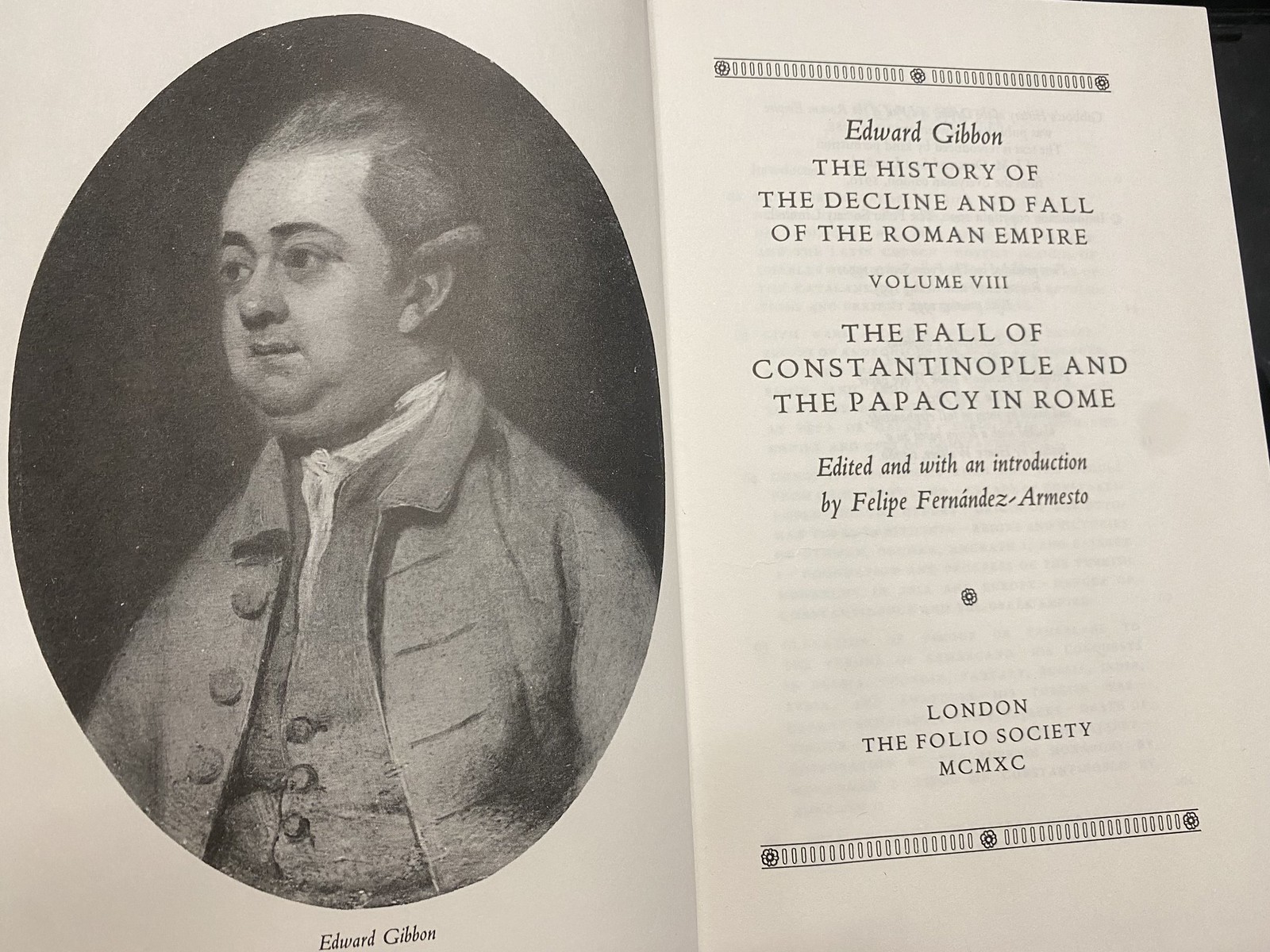 Edward Gibbon: The Decline and Fall of the Roman Empire, (vol. 8, Folio Society Edition). In this, the final volume, we see the Byzantine Empire down on its uppers. Reduced to Constantinople and its environs, with a small scattering of Aegean Islands and enclaves, the final conquest was only a matter of time. Quite a lot of time, as it turned out, as the Turks were perpetually distracted by their own internal wrangling; pressures from outside, notably the incursions of Genghis Khan and Tamerlane; and more prosaic matters. For example, the conquests of the Sultan Bajazet were brought up short

not by the miraculous interposition of the apostle [St Peter], not by a crusade of the Christian powers, but by a long and painful fit of the gout.

The Byzantines did themselves no favours by ceaseless internal scheming and schism. Slowly, their ability to command resources dwindled. When one Byzantine prince presented to his inamorata a crown of diamonds and pearls, ‘he informed her, with a smile,

that this precious ornament arose from the sale of the eggs of his innumerable poultry.

At times, the relic of the Roman Empire maintained a precarious existence thanks to the munificence of the Turks themselves (to whom they paid tribute); the energies of the Italian maritime republics, particularly Genoa, which maintained a sizeable presence in Constantinople until its fall in 1453; or simply by playing one antagonist off against another. Finally, the Byzantines attempted to save themselves by overtures to the West: that a reunification of their two divergent churches might be backed up by western arms to stay the Turks. Various synods were convened. All ended in failure.

Perhaps the key to the final fall of Constantinople was the invention of gunpowder, for the use of which the Turks created the most immense cannon (reminiscent to news watchers of a certain age of the supposed ‘Supergun’ of the Late Saddam Hussein, despot of Iraq.) Gibbon is not impressed:

If we contrast the rapid progress of this mischievous discovery with the slow and laborious advances of reason, science, and the arts of peace, a philosopher, according to his temper, will laugh or weep at the folly of mankind.

Gibbon’s description of the fall of Constantinople is gripping.

From the lines, the galleys, and the bridge, the Ottoman artillery thundered on all sides; and the camp and city, the Greeks and the Turks, were involved in a cloud of smoke, which could only be dispelled by the final deliverance or destruction of the Roman Empire.

The final chapters form a kind of coda, in which Gibbon examines the state and governance of Rome itself, from the twelfth to the fifteenth centuries. In doing so he comes full circle, considering Rome as a city state, with all its petty wrangles, and with even less of a reach than the infant Roman Republic.

What can one say, finally, about this 2,900-page epic? I found it as stately, well-proportioned and elegant as a Georgian mansion. As someone said of Wagner, it has marvellous moments, and rather tedious quarters of an hour — but the overall effect is spectacular. To be sure, it wouldn’t do for every day. Rather like turning up at the supermarket to do the weekly shop in a chauffeur-driven Rolls. But as a prose stylist, Gibbon is (in my opinion) unmatched. 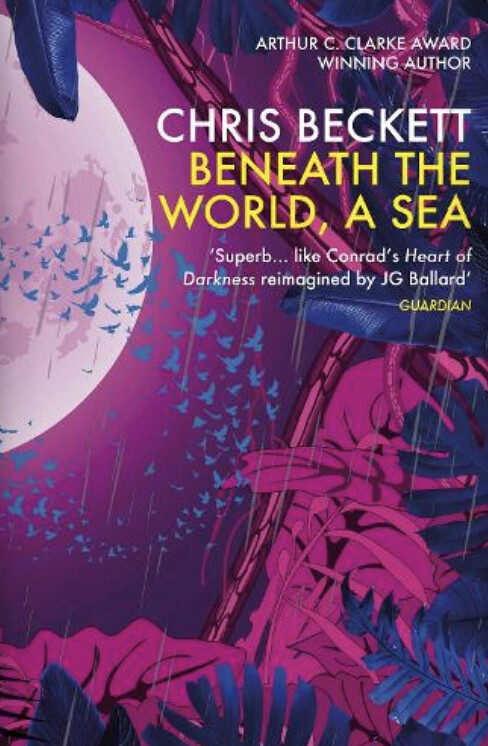 Chris Beckett: Beneath the World, a Sea ChrisBeckett is one of the most original SF authors writing today. His novel Dark Eden, about a group of people descended from astronauts stranded on an alien planet, was one of the best SF novels I’ve read in years. Beneath the World, a Sea, conjures similar atmospheres, though in a very different setting. Ben Ronson is a detective sent to the Submundo Delta, a strange region of Brazil, cut off from the rest of the world, with an unearthly flora and fauna. He is there to investigate the killings of the duendes, the Submundo’s weird indigenes, which have a disturbing psychic effect on anyone who gets close to them. It’s a bit Heart of Darkness, and asks penetrating questions about our identities as people. Who are we, really, once we have stripped away the learned reactions to the rest of the world, the personae we are forced to adopt in order to get along in society? 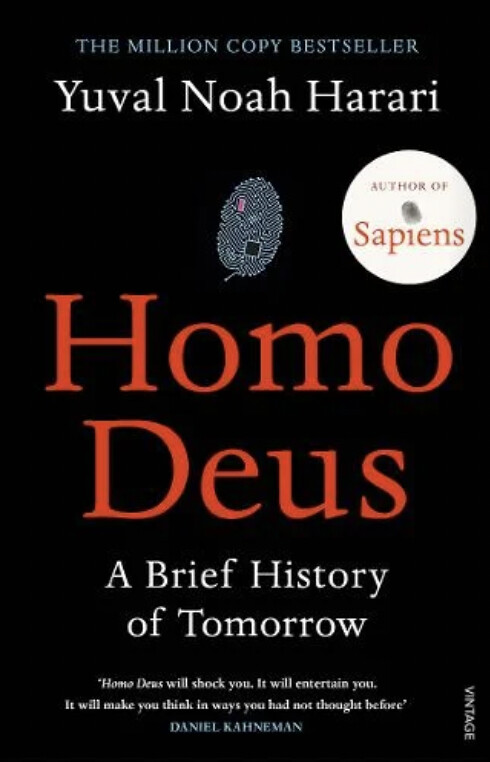 Yuval Noah Harari: Homo Deus I found this book quite infuriating – possibly because the subtitle (‘A Brief History of Tomorrow’) is misleading, and also because I found it thoroughly overwritten. It does say some things about the future, but you have to wade through 400 pages of tendentious moral philosophy to get to it, after which it proposes a kind of new religion called ‘Dataism’ in which information flow is everything and individual humans are redundant. In doing so it proposes a number of axioms, some of which are problematic. The idea, first, that organisms can be reduced to ‘algorithms’ is twenty years out of date. The second, that there really is no individual ‘self’ is plainly wrong. Although the story the brain tells us about the world is incontestably biased and demonstrably inconsistent, it is a story, and no worse for all that. But the most frustrating thing about this book is that it has been written without an editor. Overstuffed and repetitive, it would have been entertaining at a third the length.

J. R. R. Tolkien: The Fall of Numenor Almost exactly half a century since the death of the author, the Tolkien industry rolls on. This is a collection of Tolkien’s writings on the ‘Second Age’ of his imagined world — between The Silmarillion and The Lord of the Rings — gathered together by Tolkienist Brian Sibley, much as a scrapbook, with pleasing illustrations by Alan Lee. There is nothing here that’ll be news to any Tolkienist, though some of the material is fairly obscure, having been buried in the 12-volume History of Middle Earth (a compendium of unpublished writings collected and edited by Christopher Tolkien, J. R. R.’s son and literary executor). It is a handsome if not strictly necessary addition to the Tolkien addict’s shelf (such as mine).

Henry Gee is an author, editor and recovering palaeontologist, who lives in Cromer, Norfolk, England, with his family and numerous pets, inasmuch as which the contents of this blog and any comments therein do not reflect the opinions of anyone but myself, as they don't know where they've been.
View all posts by Henry Gee →
This entry was posted in Writing & Reading and tagged a curious boy, beneath the world a sea, Brian Sibley, chris beckett, dark eden, edward gibbon, homo deus, J R R Tolkien, life an unauthorised biography, Richard Fortey, the decline and fall of the roman empire, Yuval Noah Harari. Bookmark the permalink.

1 Response to What I Read In December