Me: “Well, put it this way, I don’t think I’ve ever see 800 such enthusiastic science undergraduates in one place…”

Not horrible, but electric, exhilerating and exciting, the spirit of the iGEM Jamboree is absolutely perfectly captured by iGEM HQ’s Flikr photostream – also check out the iconic iGEM from above picture: 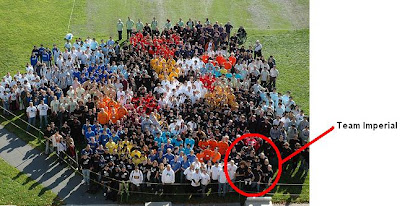 iGEM, for iternational Genetically Engineered Machines, bills itself as the premiere undergraduate Synthetic Biology competition. At the beginning of the summer, the 84 registered iGEM teams were sent a kit of biological parts. These parts, or BioBricks, come in the form of DNA sequences, prefixed and suffixed with standard restriction sites, enabling them to be ligated using a standard protocol. Teams are instructed to use the existing library of parts, to combine them, characterise them, test them, and to design, synthesize and test their own. By transforming bacteria with systems of BioBricks, iGEM teams engineer their cells to become biological machines.

November 8-9 saw the Stata Center at MIT host the iGEM Jamboree, the annual celebration of all things iGEM. Part-conference, part-party (Corrie described her experience of the 2007 Jamboree as like a pep rally), the Jamboree is the teams’ opportunity to display their work for judging in the hope of being awarded a prize. Presentations were made, posters were displayed, ideas were shared and new friendships were declared, as teams vied for the coveted Grand Prize and BioBrick trophy.

Trophies to be won, including the BioBrick tropy, far right. With more than eighty presentations running in seven concurrent tracks on Saturday, Jamboree attendees were obliged to attend only a fraction of the teams’ talks. Imperial iGEM 2008 gave it their all during the first session: The evening was allocated to a Poster Session, allowing attendees to catch up with teams whose presentations they had missed, and to be grilled by the judges:

“If we use enough long words, do you think the judges will be impressed?” Late Saturday evening, the finalists were announced! The six teams making the final each found a quiet corner to perfect their presentations for the Grand Final on Sunday morning. Team Imperial headed to the bar…

Before the Grand Prize winner was announced, other prizes were awarded Each team was eligible for one of three levels of medal and in addition there were prizes in each track and special prizes for achievements and contributions to the Synthetic Biology Community. Imperial were delighted to walk away with two trophies – “Best Manufacturing Project” and “Best New BioBrick – Natural” for our molecular clutch, EpsE.

Slovenia were awarded the Grand Prize for their immunobricks, with first and second runner-up places going to Freiburg and Caltech resepctively. This was the second Grand Prize for Slovenia, who also won in 2006.

When I explained what I was spending my summer doing, a friend remarked “Oh! Like Robot Wars for Bacteria!” Having witnessed the ingenuity and slick presentations at the iGEM Jamboree, I extend this analogy: “Robot-Wars-meets-Dragons-Den-with-a-touch-of-Eurovision”:

Team Heidelberg with their Dancing Phage