I am evangelical about this

PhD students should* consider industry roles; academics should not dissuade them.

Ten years ago today I began my career as a statistical consultant in the pharmaceutical industry. I went directly from my PhD: I submitted my PhD thesis on a Friday, went clothes shopping on the Saturday and started my new job on the Monday. I moved house the following Thursday, in order to cut my commute down by the order of one cross-London Tube journey.

Academia, and academics, can be hostile to this sort of hijinks. After I left Imperial and UCL and went to industry, I missed academia. In the intervening years I negotiated my own time with my employer, enabling my attendance at numerous seminars, workshops and other academic events related more or less tangentially to my day job. For me this was not related to career progression, nor what industry calls technical development. This was a different sort of outlet, a form of nostalgia. I would turn up and listen, wanting a sense of homecoming, only to realise I am overdressed, too direct with my language, and did not belong at all in those dusty lecture halls anymore. 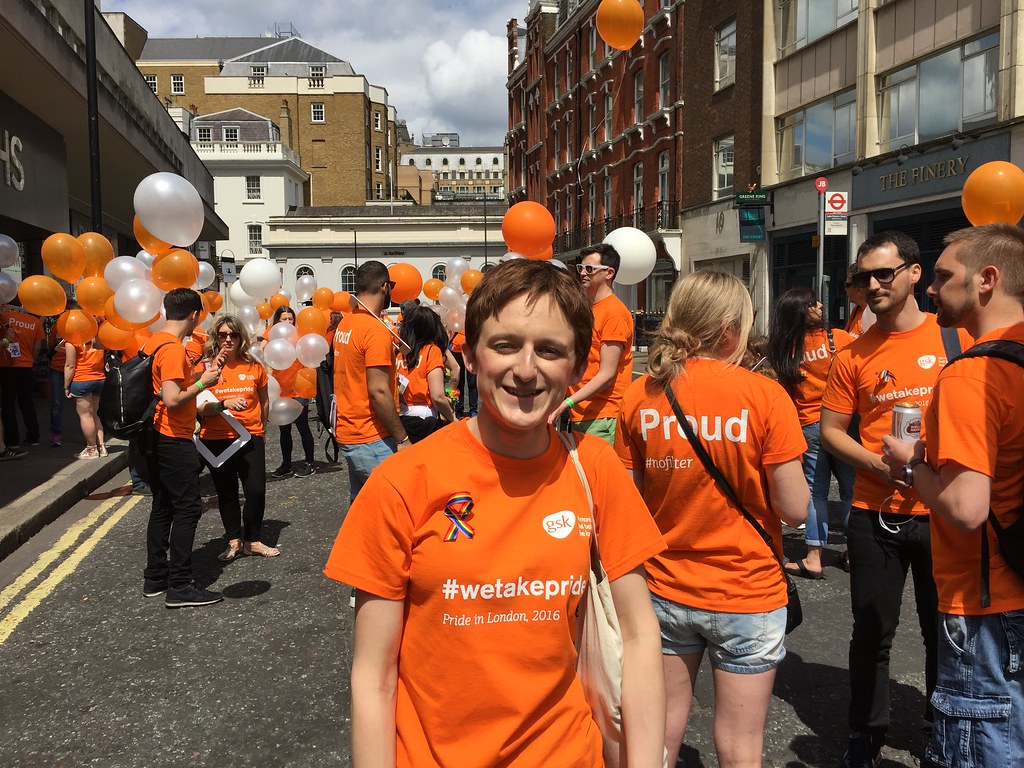 A statistician who has never felt more awkward: the one time I relented and put on a company-branded T-shirt, at London Pride in 2016.

In corporate life, one was supposed to carefully plan one’s conference attendance for the year during January, jointly with one’s line manager, but I was line managed two layers up from the US. Because time zones I could get away with going to various extra-curricular things during work time, in London, usually, especially if I could find a quiet corner of a conference to dial into any important meetings. Don’t get the wrong impression of working industry life: whilst the work-life balance is, in general, compared to academia, more reasonable, it varies over time and career stage as it does in any profession. The flexibility I was granted with my working hours is by no means a given. I earned trust through the Seattle gig among others, ask me in the pub about that and I’ll tell you. I could turn the handle when needed and hated letting colleagues down; to the extent that I was able, I delivered due work to timelines.

Industry suits some people better. In concrete terms: academia is a zero-sum game. I get the grant, you do not get it. I scoop you, I get the kudos. There are finite prizes, and limited resources. Fighting for academic karma points becomes one’s raison d’etre. I am reminded of Sayre’s law as applied to academia in a quotation usually attributed to Kissinger and rephrased to me as

In academia, the fights are so bitter because the stakes are so low.

I am not saying this is a bad thing. It’s not even true quite a lot of the time, for all that it is quotable. Academia suits some people, seems to let many more of them down, and does not suit some others.

In research in industry, the stakes are not better, nor necessarily higher, so much as they are different. The whole ship is at stake; if one of us goes down, we take others with us. Humans are still humans and whilst turf wars and latent power struggles and empire building and all the rest of it do go on, the overall winners are not always the ones who fought to be first author. The goal such as there is one is to navigate the whole team through current, concurrent economic, scientific and political cycles safely, with the minimium of carnage, and, in pharma, hopefully along the way to play our incremental parts in the process of making a medicine. One goes from being master of one’s destiny with an outcome to an extent proportionate to time spent at work, to a tiny, tiny cog in a hundred-thousand person machine. There are roles for everything, including things that you have never heard of. So I was the statistician who supported the pre-clinical scientists in one or more areas of biology, or one or more technologies; at one point I was the in-house go-to person for the statistical design of transcriptomic studies; another the stats point person to Immunology. A niche within a niche, as it were, but I was perceived to add value nonetheless. If this had not been the case, my role would have been made redundant eventually.

Corporate adjustment is the change in ways of being and doing from academia to industry. It hurts. An academia to industry career transition needs to be made judiciously and with a degree of self awareness. The move is easiest at one of two career stages. One can move, as I did, fresh from a masters or doctorate or perhaps a short postdoc just to make sure one was not at home in academia. At this stage one is malleable, still relatively young and able to learn new things quickly, and not yet quite so wedded to the ideals so important mid-career. The other people who arrived who were successful were professor-level and brought something specific. In my field this was usually technical expertise. If these people came willingly they commanded respect straight away, especially if they were known from the literature and conference circuit.

To conclude: students, think of industry as a realistic career option; academics: your colleagues and counterparts in industry know things you do not. A collaborative and healthy working relationship between academia and industry is a beautiful thing, the best of both worlds, and a joy to be a statistical consultant to. Those roles are some of my greatest pleasures.

* I don’t really believe in “should”, said breezily with a wave of the hand, used to be one of my maxims. My vocational transition is about as much fun as it sounds.