If you ever happen to find yourself in the USofA and in particular in Northern New Mexico go to Chaco Canyon. Its just cool. You might want to make sure you have a nice 4 wheel drive to get there so you don’t fishtail like crazy (think single track, sand and washboards) but go.

The Chacoans (a mixture of Hopi, Navajo and other tribes over the years) built this huge, well, city which was active between 850 and 1250 and you can still see the ruins from many of the large architectural structures.

Geologists – its a big Cliff House Sandstone site, where you can observe geological time Fossil hunters – there are really cool sea creatures on top of the mesas some from the late Cretaceous period.

Archeologists (it has 4000 registered sites) And my favourite, these peoples were aware about astrophysics or astronomy or some version thereof – which is easy to see because there is NO light pollution – besides from other campers – and a big sky and you can clearly see the Milky Way even on a cloudy night! 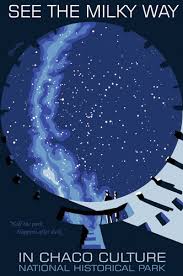 Such a great place and thankfully it is preserved for all of us to go to (provided we can get there) thanks to the US National Park Service (Department of the Interior) which like the analogous UK National Trust, is an institution that the US government does right!

Girl, Interrupting aka Dr. Sylvia McLain used to be an academic, but now is trying to figure out what's next. She is also a proto-science writer, armchair philosopher, amateur plumber and wanna-be film-critic. You can follow her on Twitter @DrSylviaMcLain and Instagram @sylviaellenmclain
View all posts by Sylvia McLain →
This entry was posted in Chaco Canyon, US National Park Service and tagged Archeology, Astronomy, Chaco Canyon, Geology, Supernova, US National Park Service. Bookmark the permalink.