Still Locked Down and Blue 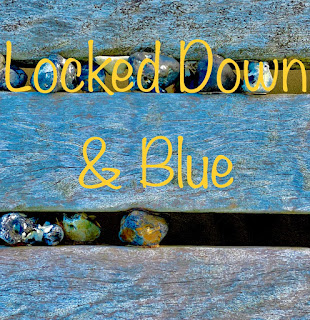 You’ll both no doubt recall that I have started to record some music at home, as a displacement activity while I cannot play with my regular beat combo for reasons that will hardly need to be explained. You can listen to it here, in this free-to-air link on SoundCloud, a social media app for sharing one’s own music. The set is called Locked Down and Blue. Here are some liner notes.

Wish I Could (Coleman/ Gee) started an idea from Dominic Coleman, lead singer with the D. C. Wilson Band, with whom I have been writing songs lately. It turned into a monster. Inside my head it became a stadium rock number that might, in an alternate universe, have been performed by Supertramp, latter-day Fleetwood Mac or even Steely Dan. Outside my head … well, you can judge for yourself.
Strangelove (Coleman/ Gee) was the title of a song written by Dominic, which I’m ashamed to say I discarded entirely but kept the title. It’s my first attempt at hip hop, and probably my last, given that I am about as urban as a combine harvester. Writing the song, however, gave me a new appreciation of the genre, which combines clever external and internal rhyme with witty use of rhythm, stress and alliteration. As a wrangler of words myself, I admire and wonder at people who can do this on the spot. Apart from that, I am rather proud of my funk guitar riff.
Rent Party Blues (Coleman /Gee) is an early collaboration between Dominic and myself. I had intended it to be more of a jump-jive than it is, but I could never get it to work. Eventually I simplified it as if Dr Feelgood were playing it. With Chas’n’Dave.
What BB Did Next (Traditional, arr. Gee) is a new spin on Black Betty, a traditional song whose origins are lost in the mists of time. The identity of the eponymous Betty is a mystery – some say it was a musket; others, a slave-overseer’s whip; yet others, a bottle of whiskey. The earliest known recording dates to 1933. By the time Leadbelly recorded it in 1939, Black Betty had coalesced into the blues cliche of the loose-woman-who-done-me-wrong. Leadbelly’s recording is as simple as can be imagined – just a singer accompanied by the tapping of his own foot. I first heard it as a teenager in 1977 when a rock band called Ram Jam added instruments and turned it into a hit, a formula since copied by many others, from Pat Travers and Spiderbait to Tom Jones and Norfolk’s own Ollie Brown. Although I have always liked the song I found some the lyrical content, frankly, rather noisome…. so I have updated it for the BLM generation. I’ve also stripped away the rock excrescences to just me and a djembe drum.
Girl On The Train – the first ever song I’ve composed and performed mainly on guitar.  The subject is very personal. I’ve written on a similar theme before.
No More Cane (Traditional, arr. Gee) is more vintage Americana, this time discovered decades ago in my parents’ record collection. It seems that they’d had a brush with the US Folk Revival in the early 1960s. Their records included discs from Pete Seeger and the Kingston Trio, but the ones that stayed longest in my mind were two albums from the Limeliters. This comes from one of them, 14 14K Folksongs, originally recorded in 1963. The arrangement, however, is mine, and is similar to the way I played it in a band called Hippies With Mortgages, in the early 1990s. WARNING: contains accordion.
My Big Boots (Gee) is a song that popped into my head while walking the dogs. I was wearing my big Timberland boots that I’ve had for 25 years; have trod five continents; and are only now falling to pieces.
Where Shall I Be? (Traditional, arr. Gee) is another cover of a traditional song, again done by the Limeliters, this time from their gospel album from 1963, Making A Joyful Noise. It was a closing-time crowd-pleaser with Hippies With Mortgages in the late 1990s. When I announced that the next song would be ‘Where Shall I Be, when that Great Trumpet Sounds?’ the guitarist would say ‘listening to Kenny Ball and his Jazzmen’. WARNING: contains accordion.

Average Feat (Borley/ Coleman/ Gee/ Sales/ Stevenson/ Thompson) started as a funky blues riff, at a soundcheck with the D. C. Wilson Band. We thought it was what might result from a collaboration between the Average White Band and Little Feat, hence the name.

Down By The River (Coleman/ Gee) is is a gospel-tinged tune – Dominic came up with the words and the chords just wrote themselves.

Can’t Change The Past (Coleman/ Gee) is another collaboration between Dom and myself.

Wet Dog (Borley/ Coleman/ Gee/ Sales/ Stevenson/ Turner-Hook) came from a rough song I came up with at home. I didn’t have a name for it, so for the sake of a label I named it after the first thing that came to mind… I must have just come back from the beach with the dog. Dominic took this literally when the band worked it up at a jam session. It was meant to be fairly light but during the recording I seem to have channeled Jim Steinman.

Green To Play The Blues (Borley/ Coleman/ Gee/ Sales/ Stevenson/ Turner-Hook) is another one that came out of a D. C. Wilson Band jam session that happened ‘down in the country’. This one started as a riff from guitarist Simon Sales, but I developed it to include an hommage to the late Peter Green, with whom I’d had the immense privilege of joining at a jam session — twice. The first version of the song featured faux GarageBand guitar played from a keyboard, and I wasn’t really very happy with it. However, I updated it with real guitar after having bought an Epiphone Les Paul I-P90 during the recording of this set. I think it sounds a lot better now.

The Gambler (Traditional, arr. Gee) is yet another cover of a traditional song, again done by the Limeliters, also from 14 14K Folksongs. The roots of this song are once again lost in the proverbial mists of time, but it surfaces occasionally with titles such as ‘Gambler’s Blues’ or ‘St James Infirmary’, so I felt I could give it a new title – especially as I have reworked it extensively. Perhaps the best-known version is ‘St James Infirmary Blues’ by Cab Calloway (listen here, and watch this bizarre Betty-Boop-Snow-White visuals). And here is Arlo Guthrie, performing another version.

Lockdown Blues (Gee) was something I came up with while walking the dogs. I expect many other people have written similar songs. Here I wanted to recreate the atmosphere of a jam session. The only GarageBand sound here is the stand-up bass. Everything else is ‘real’ – piano, electric guitar, two acoustic guitars, djembe drum and accordion. I did it in free time, which shows, rather. It’s much faster at the end than at the beginning.

A Change AMJ (Cooke/ Holler) is a medley of two favourites, the first by Sam Cooke, the second made famous by Marvin Gaye. 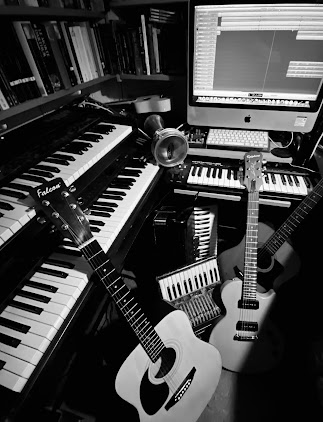 Technical Notes for People Who Like That Sort Of Thing: My recording platform of choice is GarageBand 11, which I have used on a previous project. I trigger the GarageBand sounds with a Keystation Mk3 49 USB keyboard from M-Audio. For anyone who asks, I do not intend to upgrade to Logic or any other platform, for fear of being lost in minutiae and distracted from the business of making music. Yes, it has its limitations, but I enjoy working with (and around) them.

Nearly all the organ, clavinet and electric piano sounds are from a Crumar Mojo 61 drawbar keyboard, and most of the acoustic piano sounds come from a Yamaha Clavinova CLP20.

Some of the accordion is from a tiny 12-bass Bell model reputedly once owned by John Paul Jones of Led Zeppelin. The rest is from a great big Galotta 120-bass model I got for my 18th birthday and which still offers hours of innocent pleasure forty years later, for me, if not my neighbours.

Some of what sounds like guitar is faked through GarageBand.This includes everything that’s meant to sound like lead guitar. My capability in guitar is strictly rhythm. What passes for real electric guitar comes from an Epiphone Les Paul I-P90. There is also some real acoustic guitar (a budget 6-string with the top string removed, as I kept bumping into it) and real acoustic slide guitar (a different budget 6-string acoustic). There’s also a metal djembe drum, which supplies all the rhythm in Lockdown Blues and is the only instrument on What BB Did Next.

Vocals (as well as accordion, acoustic guitar and djembe) are recorded through a no-name microphone, and all external sounds go into a Behringer Xenyx 802 mixer, which feeds the sound into a 2009 model 24-inch iMac running OSX Lion. (Don’t knock it – it’s much stabler than my other iMac, which has OSX Catalina, and also has a handy CD slot, so I can burn CDs). Monitoring is through a Behringer Xenyx 302 mixer, Bose bookshelf speakers and Beyerdynamic DT 150 headphones. So now you know.