The creative energy unleashed by an unconference is a wonderful thing. I attended LibCamp2012 recently and was surprised that a disparate bunch of people can self-assemble such a varied and interesting programme, all in one day.

I went to the first LibCamp last year. It grew out of something called GovCamp, a local government unconference. The public librarians who had attended GovCamp thought that a library version might work well, so they organised LibCamp2011 in Birmingham. That went very well and inspired several local libcamps (I went to the Brunel libcamp in January). The 2012 event, also in Birmingham, attracted a similar mix of people from public, academic and other libraries – about 200 attendees.

The energy comes from the immediacy, the informality and the level of participation in discussion, cross-fertilised by the broad cross-section of types of libraries represented. The sessions are interactive. Rather than a long lecture followed by a few questions, the sessions I attended comprised a short exposition followed by an extensive round-table discussion, where we shared our experiences. I think the unconference is second cousin to the blog: a home for half-baked ideas (in the nicest possible way) and lively comments.  Talking of baking, LibCamp also has a fully-baked component in the shape of cakes brought along by delegates. The programme was eclectic, assembled by means of a pitching session at the beginning of the day (and a wiki for idea-sharing in advance of the event). I didn’t hear most of the pitches as one of the organisers thrust a camera into my hands and instructed me to take photos. I didn’t cope very well with the unfamiliar camera and I suspect they all came out poorly composed and blurry. Luckily the battery ran out so I was able to hand the camera back after a few minutes.

This is the post-it note version of the programme: 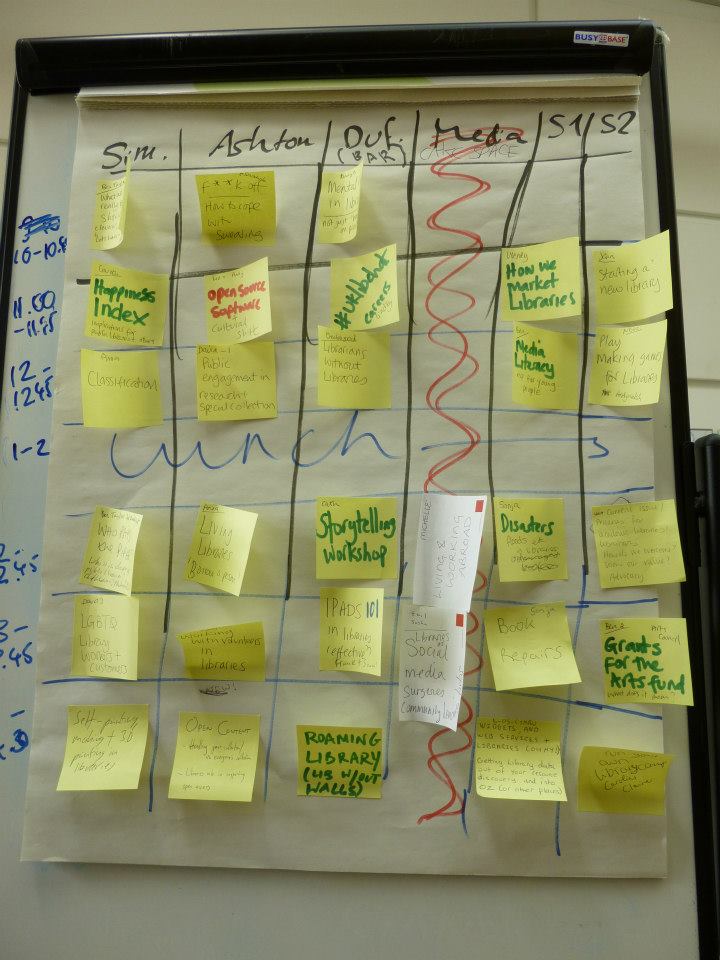 And this was a readable (but incomplete) version circulated later:

With five parallel sessions at any one time there was a good deal of choice. One session on how to cope with swearing attracted some interest and there was apparently some disagreement in the session on What is a Library for? The five sessions I attended were less dramatic, but thought-provoking nevertheless.

The session on Living libraries, as pioneered by Malmo public library in Sweden, was fascinating. It was led by  Anna Brynolf, who had lived for some years in Sweden.  The idea of “lending” living people was envisaged as a way to lessen differences between cultures – you  could confront your prejudice about a particular group by “borrowing” and talking to someone from that group for 45 minutes. For instance, you could meet with someone who was an animal rights activist, or a Muslim, or a vegan, and talk to them about their beliefs or experiences. The idea started at a music festival in Denmark but it developed further in Sweden and has since spread elsewhere. One person at the session told us she had worked in a library in Dublin that had a similar project.  Someone tweeting about the session discovered that in the UK it had also been done at the WOMAD festival, and at Anglia Ruskin University. The Human Library website has more background about the idea and mentions projects in various countries around the world:

The Human Library enables groups to break stereotypes by challenging the most common prejudices in a positive and humorous manner. It is a concrete, easily transferable and affordable way of promoting tolerance and understanding.

Another unusual library was described in a session by someone hoping to establish the UK’s first tool library. He explained that there are several of these in the USA and a handful elsewhere. One of the earliest established is in Berkeley, which is where he had come across the concept. Now living in Dudley he decided to set up a tool library there. He has funding and some space and we gave him a few more ideas about how the library might be set up.

My favourite session was on roaming libraries, presented by the remarkable and brilliant Itinerant Poetry Librarian, aka Sara Wingate Gray. I think she was keen to encourage us to discuss roaming libraries more broadly. She mentioned the Mile High Ref Desk, which provides library services to passengers on airline flights, and Radical Reference, which is “dedicated to information activism to foster a more egalitarian society”. However I found her descriptions of her own project much more interesting and was happy just to hear her talk about that.  Sara has taken The Itinerant Poetry Library (TIPL) to more than 20 cities in the USA and Europe. She sets it up in bars or coffee shops, registers readers and then lets them borrow poetry books. If you want to know more about TIPL, there is a nice article about it in Varsity. There is an element of performance to TIPL which gave me food for thought. I have been doing some background reading on science busking which also involves a significant degree of performance, and attention-grabbing. Perhaps we need a new breed of librarian to grab people’s attention and thrust books under their noses.

The most hard-core session I attended was on classification. The session leader set out the dichotomy between the philosophical approach (the right class mark) and the pragmatic approach (the right classmark for my library) to classification. I always assume that most libraries use sensible classification schemes – the major schemes like Library of Congress or Dewey. A quick survey of the room revealed a wide range of schemes in use, from major global schemes, to very old (obsolete) schemes, hybrid schemes, multiple schemes, and weird local schemes. Someone commented that library users did not all understand what classification was for and were pleasantly surprised to find that books on a similar subject were all in the same place on the shelf.  But some academics complained vociferously if ‘their’ books were (as they saw it) classified wrongly. On the plus side, we heard reports that reclassification could be effective, increasing the number of library users who could find books.

The most interesting question raised was whether classification was necessary at all for electronic resources. The answer must surely be “No”, since classification is all about physical books on the shelf. That set me thinking about the benefits of browsing at the shelf, and wondering whether there could be a way to create a life-size electronic shelf search/browse that combined the advantages of the old and new technologies. It would be a giant vertical touch-sensitive screen in the Library that allowed you to search and view full-text content, and mark items that you wanted to read later.

I will draw a modest veil over the session on iPads in libraries that I co-facilitated with Sarah Barker but I think it went down well. There was less sharing of experiences than I had hoped for, perhaps because it is still not that common for libraries to lend iPads.

The session on mental health in libraries was remarkable for the way that people shared their experiences, good and bad, very openly.  Not much of the discussion was specific to libraries, but applied to the workplace more generally. The most useful thing I learned was that an organisation called Mental Health First Aid offers free training in “how to recognise the signs and symptoms of common mental health issues, provide help on a first aid basis and effectively signpost towards support services”. A number of people in the session said the courses were very good.

So, that was my Library Camp UK 2012. I enjoyed the day – it went very quickly.  I would have liked to have gone to more sessions, but I enjoyed those I did attend. It was a shame that the venue’s wifi was not up to scratch but that meant I listened and talked more freely instead of trying to tweet all the time so perhaps it was for the best.  For me the benefit was in hearing a wide range of ideas from well outside my comfort zone, from people I wouldn’t otherwise meet as we are in different parts of the library world.

Note: thanks to Andrew Preater for giving me Anna Brynolf’s namE, as the leader of the living libraries session.

I am a librarian in a biomedical research institute. I've been around a few years, long enough to know that exciting new things fall into the same familiar patterns. I'm interested in navigating a path for libraries as we move further from print to electronic resources to open research, and become more embedded in research workflows.
View all posts by Frank Norman →
This entry was posted in Libraries and librarians and tagged LibCamp, LibraryCamp, unconference. Bookmark the permalink.