I was taught as a child that if you are walking on a road that has no pavement then you should walk on the side of the road so as to face the oncoming traffic. If the cars are driving on the left, as in the UK, then you must walk on the right.  This was drummed into me as a safety thing. I think the rationale is that you will be able to see (and take action to avoid) vehicles that are coming towards the spot where you are. Walking on the same as the cars would mean that they could come up behind you, unseen.

During my recent holiday (well, it was May/June so it seems an age away now) my favourite route for a morning run was along the side of the Marikina river. There was a good path, almost a road, alongside the river. Even at 6am it was well-populated with walkers, runners and cyclists. One short stretch of it allowed motor vehicles but mostly it was car-free. 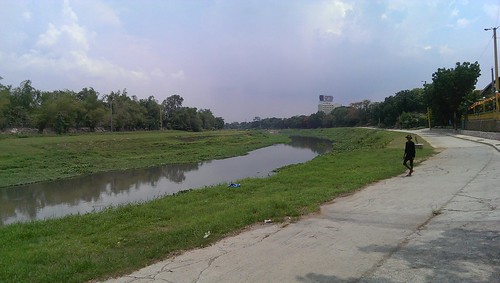 OK, so this part of the path was a bit quiet when I took this photo.

By instinct I followed my childhood rule, running on the side to ensure that I was facing oncoming traffic (bicycles). But it felt wrong.  Most of the other users of the path were walking or running, not on wheels. Should I be running on the same side as them, or the opposite side? I didn’t need to take evasive action against them. Furthermore, many of those who were on cycles were going so slowly that I was actually running faster than them. I was part of the same stream as the walkers, runners and cyclists, so I should stop seeing them as a different flow to be opposed and just join their side.

That’s a bit how it is for me at work just now. By instinct I am flowing along in the ‘old Institute’ and feel that the ‘new Institute’ is flowing on the other side of the road. We have had several years of taking guard against the opposing flow (foe). Thus the habit of talking about the new as “them” and the old as “us” has become ingrained and is hard to shake off. Partly this is because the locus of all decisions about the new Institute is outside any management structure that I am a part of. In a matter of months we will be formally incorporated into the new organisation. I need to start thinking of myself as part of the same stream as the new Institute, not walking on the other side of the road. I hope that soon I will instinctively join the flow towards the future.

I am a librarian in a biomedical research institute. I've been around a few years, long enough to know that exciting new things fall into the same familiar patterns. I'm interested in navigating a path for libraries as we move further from print to electronic resources to open research, and become more embedded in research workflows.
View all posts by Frank Norman →
This entry was posted in Crick. Bookmark the permalink.

One Response to Contraflow