Back in September 2010, I’m not sure that any of us who answered Jenny’s call to action knew quite what to expect. Maybe not even pulling off a rally attended by over 2,000 scientists and supporters; perhaps not going to Downing Street with 35,000 names on a petition; probably not being called into a minister’s office at short notice for a very interesting chat—and I’m pretty certain that we didn’t consider if we’d still be going two years later.

But here we are. We’ve presented a report on science careers to that same minister; we have our first Annual General Meeting on 13th September (at Christopher Ingold XLG1 Chemistry Lecture Theatre, UCL, 20 Gordon Street, London, WC1H 0AJ); we have a bank account; we even have a Constitution (if only I can remember where I put it). In addition to all that, we’re subverting the Guardian Science Blogs to raise awareness of the cause.

And perhaps even more importantly, thanks to the inestimable Della, we have pin badges! 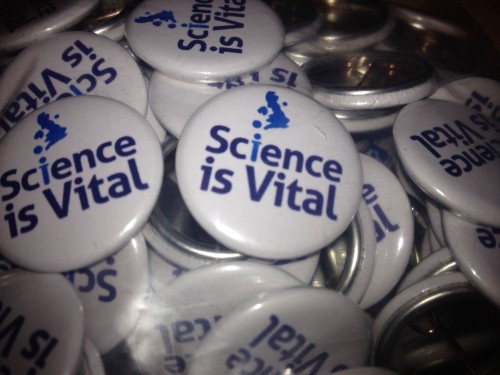 One of these pretty, shiny things can be yours for the princely sum of one of your English pounds, and they’ll be available at the SiV AGM. And subsequently probably from any of the committee members—if we don’t sell them all on the 13th. All monies will go directly into the SiV coffers, thence to support our next campaign, whenever that might be.

Wear yours with pride!

Scientist, poet, gadfly
View all posts by rpg →
This entry was posted in Science is Vital and tagged badges, funding, science is vital. Bookmark the permalink.

5 Responses to On message