Thirty years ago—plus or minus a week—I visited Berlin for the first time.

It was a school trip, organized by our physics teacher. We rode a train from Braunschweig to Helmstedt, where we picked up an East German engine and crew. The doors were chained so they couldn’t be opened by anyone trying to get in. We clanked our way along the dreary transit line, stopping to change engines again at Potsdam, before terminating at Charlottenburg—our gateway to the bustling, decadent shrine to capitalism that was West Berlin.

We rode on the U-bahn; visited the Olympic Park; played video games on the fifth floor of KaDeWe; had liqueur-soaked crepes in a an alcove on the Ku’damm.

We saw the Tiergarten, the Geisterbahnhöfe.

The Wall, and the Pope’s Revenge. 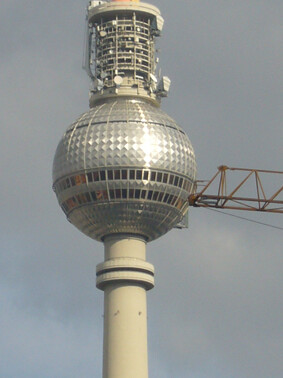 We took a coach through Checkpoint Charlie, negotiating the Soviet guards and the concrete roadblocks. We visited the Tomb of the Unknown Soldier, and his goose-stepping guards.

My clearest memory is of how grey everything seemed—the roads, the buildings: even the state-run apotheken. We came back and visited the Checkpoint Charlie museum: shocked, stilled, and dumbstruck—but not totally uncomprehending—at the desperation that led so many people to risk death to escape the East. 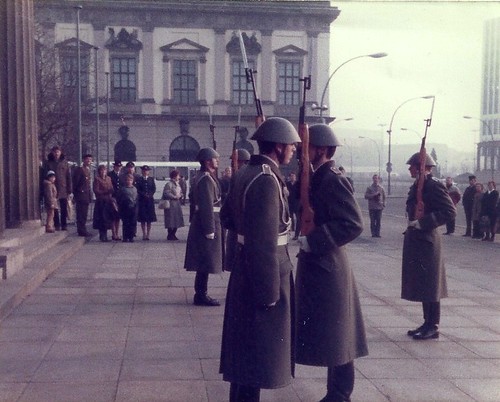 Changing of the guard

And because we were who we were, we figured out how high our hotel room was by dropping stones off the window and timing how long they took to hit the ground.

At Easter the next year I went back with my parents and sister. We drove to Helmstedt on a warm and sunny morning, to Checkpoint Alpha. Dad had to leave the car and march into the Soviet checkpoint. Outside stood a young Soviet guard in full winter furs, sweating in the unseasonal April weather. Summer uniform was a month away.

When dad got back to the car we had two hours to get to Checkpoint Bravo at Dreilinden: any faster and we’d have been done for speeding. Too slow and we would have been under suspicion of stopping and picking up passengers. In case we were stopped by the Vopos we had flashcards with two simple phrases on them, in Russian, German and English. The cards read, “I wish to proceed without further delay” and, “I demand to see a Soviet officer”. The second card was the biggie—if ever we played it we would have to wait until one turned up.

I don’t remember much of that trip—except we once again saw the Wall, perhaps the zoo too, and my sister was delighted that we had chocolate bunnies at breakfast on Easter Sunday in the B&B.

And that was it. A few years later the Wall came down (Jenny has a piece of it somewhere) but until last week I’d never had chance to visit Berlin again.

Last week was a work trip—we were running a day and a half conference at a hotel a few hundred yards from where the wall once stood. I got there on Wednesday, but we didn’t stop working until it was time to catch the flight home on Saturday. I saw a fair bit of Berlin from the window of the taxi, but had little chance to look around on foot. We did manage to walk to Potsdamer Platz, where, instead of nail beds and barbed wire and anti-vehicle trenches, we drank weissbier under the purple roof of the Sony Center.

On the way to the conference dinner I managed to catch a glimpse of the illuminated balloons that marked where the Wall once stood. Sadly, we had to fly back the day before the celebrations marking the 25th anniversary of its fall.

And when I got back told the girls about the meeting, and then about Berlin and the end of the Second World War and the Wall going up and how it came down again, they were amazed that any system of government could be so oppressive as to prefer to shoot its own citizens rather than let them leave. All they hear about is how some want to make it more difficult to get into their country, not escape it. I haven’t yet had chance to tell them the story of one of our meeting’s Steering Committee; how she and her family had to flee Berlin in 1950 when her grandfather, a local politician, was rounded up and murdered by the Stasi; how she couldn’t visit the town of her birth for 40 years.

Remembrance isn’t just about those who fought—in whatever capacity—and died for our freedoms. We must also work to ensure that those freedoms—to live and work and love without fear of oppression—are not again lost. And before we do that, we have to tell people these stories, to show them what they are unable to remember because they weren’t there.

“In Flanders Fields the poppies blow” by Tijl Vercaemer, on Flickr

Scientist, poet, gadfly
View all posts by rpg →
This entry was posted in Friday afternoon, Personal and tagged Berlin Wall. Bookmark the permalink.

5 Responses to On remembrance