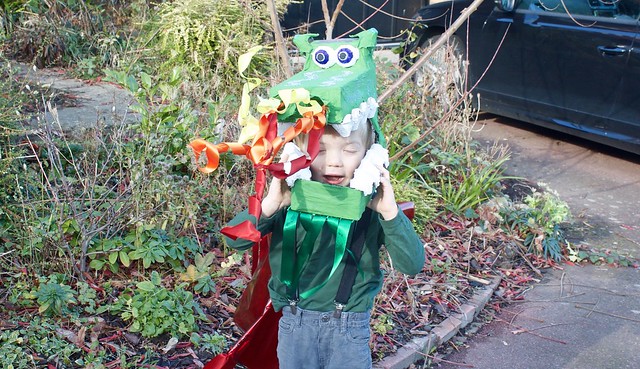 Joshua is at that delightful age when he is yet too young to be able to reliably, unaided, clean and dress himself, yet old enough to resist getting ready to leave the house in the morning.

When he was younger, he might not have helped me when I was trying to get his coat and shoes on, but at last he wasn’t actively thwarting our attempts to catch the 7.44 from Gravesend, by throwing his other shoe across the hall or waiting until I’ve got him strapped into his buggy before deciding that now he needs a wee-wee. At least he’s toilet trained, so when he has to relieve himself of the previous day’s meals in the smelliest manner possible I’m not left trying to safely file everything into a slightly too-small nappy sack.

I have to admit that some mornings, when I had to sit on him to hold his hands away from his mouth so I could clean his teeth, my mood might sometimes have tended towards the intemperate. I’m fairly certain that most working parents have found themselves in similar situations, trying not to strangle a little bundle of destructive energy while at the same time wanting to hug it with every fibre of your being.

The other guilt trip is of course the iPad babysitter. Now I know that I should always be spending quality time with Joshua making scale model Nicaraguan quinoa farms or whatever*, but occasionally I have to make dinner or sort out a crisis at work or simply pour myself an industrial-strength G&T (“Why yes sweetheart, ethanol is daddy’s favourite backup carbon source”) and giving him screen time is—contrary to hysteria—not going to cause any lasting damage.

Jenny and I did make a dragon outfit for him to wear to a little friend’s fancy-dress birthday party last weekend. Which he wore for all of 3 seconds before making off with Captain Hook’s sword and setting about St George with extreme gusto. Some kind of poetic justice, there.

Today the dreaded caller ID—Smart Start Day Nursery—flashed up on my phone. At the time, I was swotting up on a new (to me) therapy area so that I could sound learned and sensible in the kick-off meeting with the client later in the afternoon. My boss is at an event in the US and the only other senior writer capable of tackling such a project (or “bullshitting at extremely short notice” as it’s technically known round these parts) happens to be at the same event, so my mind began to race through all possible scenarios even as I answered, “Hello, Joshua’s dad.”

Turns out that he’d been playing outside, jumping across some stepping stones, but slipped and managed to bash his face on a concrete slab. Maria was calling to say it’s OK, he’s fine, but “I wanted to warn you because he looks a state”. Big bump on his forehead and a cut under his eye.

And indeed, when I went to collect him (after the client meeting, which actually seemed to go very well), it looked like he’d been ten rounds with the aforementioned St George, and I wanted to ask him what the other guy looked like.

Now he’s sleeping peacefully, and I think, once again, that I must be the most blessed man on the planet.

Scientist, poet, gadfly
View all posts by rpg →
This entry was posted in Me, Nonsense, Personal and tagged Joshua. Bookmark the permalink.