The Cao Vit Gibbon, which lives along the China-Vietnam border, is the rarest ape in the world. But a recent survey found double the expected number of the animals (around 100, which isn’t great, but is better than 50). It also seems that the gibbons’ range is expanding, which is critically important to their survival. 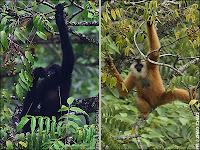 King (and Queen) of the swingers

The conservation efforts have been spearheaded by Fauna and Flora International, who said:

“When we realised the gibbon was rare enough to demand urgent action, we immediately began protection measures, even though we lacked the results from an exhaustive census. We didn’t want the Cao Vit gibbon to go the way of the Yangtze river dolphin, which was declared extinct last year.”

(Story and photo from the Torygraph)

Also this week, National Geographic reports that a 5 year search finally paid off with the discovery of a new species of monkey in the Amazon. The species, known as the Ayres uakari, is already vulnerable. The discoverer, Jean-Phillipe Boubli from the University of Auckland, says:

“We’re going to have to create a park or reserve, because [its habitat is] not a protected area.” 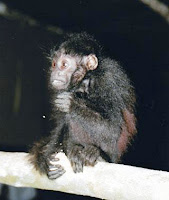 King of Hide and Seek

Let’s hope it works out as well as it did for the gibbons.

p.s. I have a post about the evolution of the avian flu virus in vaccinated populations on my Nature Network blog this week. I also recommend this post on Brian Clegg’s blog for anyone who likes geeky science jokes.

p.p.s. Mine was the featured blog on Nature’s main website for the last couple of days. It’s gone now, but I took screenshots of my 15 minutes of fame!

"one of the sillier science bloggers [...] I thought I should give a warning to the more staid members of the community." - Bob O'Hara, December 2010
View all posts by Cath@VWXYNot? →
This entry was posted in apes, monkeys, nature, photos, Primate Party. Bookmark the permalink.