The best Gregor since Mendel?

Vancouver is a fantastic place to be a cyclist. Designated bike routes everywhere (I attended the opening celebrations for the newest one last weekend), and more considerate drivers than in Glasgow (although everything’s relative, and some of my fellow cyclists aren’t exactly helping, as Dr. J has already commented). The city has even gone to extraordinary lengths to keep my regular route open during the loooooooooooong light rail tunnel and station construction project on Cambie Street, as evidenced below: 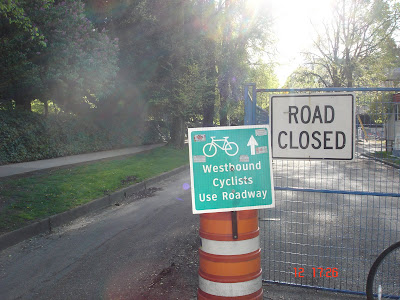 The exact configuration of bollards, cones, signs and fences has seemed to change almost every week for two years, so you’re never exactly sure which way to go, but hey, it’s open! And you gotta admire their creativity in constantly finding novel ways around the new holes and other obstacles.

I actually stopped a few weeks ago to thank a member of the construction team for keeping the route open, and she was so touched that someone had actually taken the time to do this that I wanted to make my appreciation public! 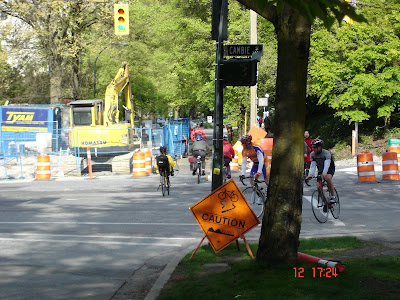 But since we got our new eco-conscious mayor, Gregor Robertson (follow him on Twitter!), things have gone from good to better:

The only thing better than the actual improvements is the spluttering red-faced reaction of the many local NIMBY and anti-cyclist types (see comments on any of the CBC articles linked above).

Yay Vancouver! Yay Gregor! And he even has a kilt, and is trying to get us rapid rail links to Seattle and Portland, and has started community gardens at City Hall!

"one of the sillier science bloggers [...] I thought I should give a warning to the more staid members of the community." - Bob O'Hara, December 2010
View all posts by Cath@VWXYNot? →
This entry was posted in cycling, embarrassing fan girl, environment, photos, politics, Vancouver. Bookmark the permalink.

6 Responses to The best Gregor since Mendel?