I’ve never done the all-inclusive thing before, and when we first began to plan this trip, I wasn’t planning to start. But it turned out that a package of one week’s 5-star* all-inclusive accommodation plus direct charter flight from Vancouver to Varadero cost only $100 each more than buying just the flights from Air Canada, which would also have entailed spending a night in or near Toronto airport. So in the end, it was a no-brainer. We had to pay an extra $100 each to push the return flight back by a week, but it still worked out as a good deal!

We stayed at Sandals, near the end of the Varadero peninsula.  It’s a really well laid out resort; low-rise (no more than three storeys) with lots of greenery, including an area we called Narnia: 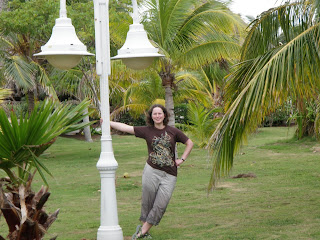 We said to another couple we met “the quickest way back to the restaurant is through Narnia”, and they looked at us like we were nuts

And, of course, the beach.

The beach was simply amazing. Mr E Man said it was better than anything he’s seen in Australia, Thailand, or Bali. Powdery white sand, turquoise water, nice big waves to play in… heaven! 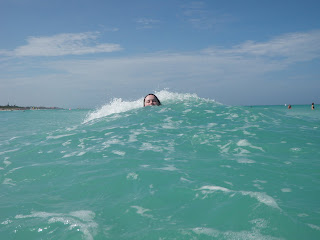 Being peelywally Celts, we always chose shady chairs under the palm-thatched umbrellas to sit and read and play cards or chess, but we spent most of our time in or on the water. There was only one day when the water was calm enough to take out the resort’s kayaks, but we made the most of it! They were the sit-on-top kind, but the nice warm water didn’t warrant the greater stability of the more enclosed kayaks that we’re used to. 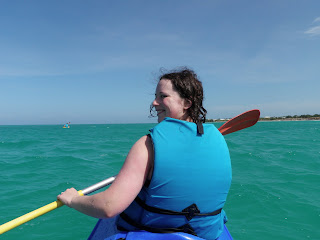 We had tons of fun trying to kayak surf – and the instructor who once told me that it’s a difficult skill to master and that I should take a course before trying it was proven correct, as we managed to roll the thing in a great big wave as we were trying to come back to the beach! I found myself under water with no idea which way was up, or where the boat and paddle were, so I instinctively curled into a ball and covered my head with my arms until a couple of other waves had gone over me and I knew the coast was clear. This caused Mr E Man and a couple of other observers to freak out for a few seconds, until I resurfaced with a big grin shouting “that was fun, let’s do it again!” (and we did, after I retrieved my paddle from 30 metres down the beach).

After a long hard slog of grants and manuscripts and swine flu and no vacation days since early March, this first unchallenging week was just what the doctor ordered! 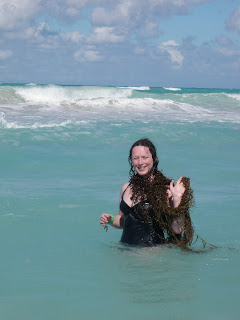 "one of the sillier science bloggers [...] I thought I should give a warning to the more staid members of the community." - Bob O'Hara, December 2010
View all posts by Cath@VWXYNot? →
This entry was posted in kayaking, photos, silliness, travel. Bookmark the permalink.