Little things that make me happy

The sun is finally shining in Vancouver! 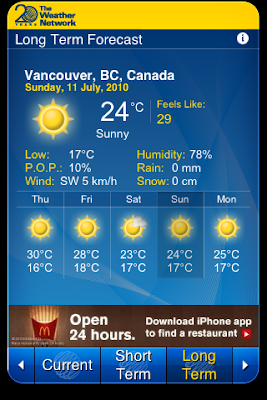 I’m not a sun worshipper by any stretch of the imagination; I burn really quickly, and find temperatures over 30C quite unpleasant (in the city, at least). But June-uary was too much even for me – I think we got more sunshine during the Olympics – and really, I shouldn’t have to wear jeans, boots, and a sweater on Canada Day. But this week has been all capris, sandals, and t-shirts, and people are in a noticeably better mood!

So here are some other little things that make me happy!

*He’s planning to buy me an iPhone 4G when it goes on sale in Canada, as a (very) belated birthday present, and then take my 3G for himself. I heard a squeal of excitement the other day as he was browsing the app store, and found out that he’s been coveting a particular, very expensive (many hundreds of dollars) kind of calculator for years, and that there’s an iPhone app for “only” $15 that has almost all of the special functions he needs from the calculator.

"one of the sillier science bloggers [...] I thought I should give a warning to the more staid members of the community." - Bob O'Hara, December 2010
View all posts by Cath@VWXYNot? →
This entry was posted in family, food glorious food, freakishness, furry friends, monkeys, personal, sport, technology, the 2009 baby boom, Vancouver. Bookmark the permalink.

16 Responses to Little things that make me happy