If you’ve been following the British news, you’ll know that the main political parties aren’t popular, because they’ve been more concerned about the welfare of ducks than of their constituents. So how do you react to this headline in the Guardian?

Oh noes! The public is turning away from the major parties!
Err, no. Not if you can understand numbers.

Here’s the numbers, in a pie chart: 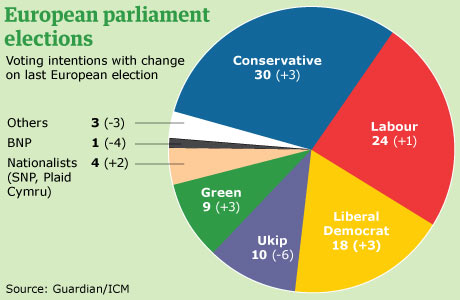 More than a quarter of voters are planning to reject the Westminster establishment in next month’s European elections, according to a new Guardian/ICM poll carried out in the aftermath of the MPs’ expenses scandal.

It finds that some 27% of voters are already planning to support a minority party. The poll also uncovered evidence that more could soon join them.

The results follow two weeks in which Labour, the Tories and the Liberal Democrats have been battered by the press and public over the publication of MPs’ expenses.

… and yet they have still maintained their levels of support. Oh wait, The Grauniad missed that bit.
Only half-way down the story are we told that the major parties’ support hasn’t slipped, and then only in a “well things could be worse” way:

Among the big parties, the Liberal Democrats are on 18% with the Conservatives set to take 30%. That is three points up on the Tories’ performance in the 2004 Euro elections, but well below the party’s standing in Westminster polls at the moment, which is around 40%.

There may be some relief in Labour circles that – while dreadful – its 24% share of the vote is no worse than the 23% that it took in 2004. The party’s high command had started to fear it could slip below the psychologically important 20% threshold, a rout which some are suggesting would trigger a challenge to Gordon Brown.

There’s a rather basic issue here. Either Tom Clark, who is credited with the story, is innumerate, or he spinning so much he should work for the palaeontology department at The History Channel.