Cath and the City Part 2

The end of Part 1 saw me sitting on Jericho Beach and congratulating myself on fulfilling my dream of moving to Vancouver. Here’s what happened next…

My first year in Vancouver was great. Hard at times, but great. I was lucky enough to be part of a very social lab in a very social department, and I found myself with an awesome group of friends who all lived close together in a part of town called Kitsilano. This was lucky because it can be pretty tough to meet people in this city, and I did spend quite a lot of time alone in my first year. I usually have more random conversations with strangers in shops, bars and on buses in my 2 week trips back to the UK than I do in a typical year here. So much for British reserve!

Living in Kits was like being on vacation the whole time. It’s a bit twee, but there are great shops, cafes and bars, not to mention the beach. The World Cup was on in Japan that summer, and I would get up ridiculously early to watch the games on TV, then head to the beach at about 6.30 am. There’s nothing quite like sitting on a log on the beach on a crisp sunny morning and watching the city come to life.

I took up kayaking, taking a weekend course on the first available date and then joining a club who went out every Monday evening over the summer. (This is the source of the photo above, which I liked so much when I posted it last time that I decided to make it a permanent feature). I went on my first kayak camping trip (more on that subject in a future post), went on some hikes, explored the city by bike, started to learn to ski, and generally enjoyed myself and saw as much as possible, in the way you do when you think you’re only going to be in a city for two years. 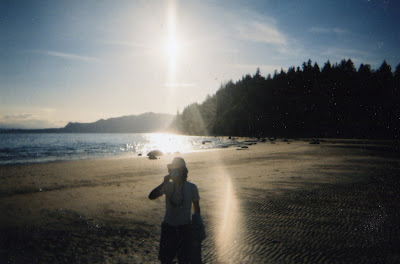 There’s nothing like a morning cuppa on the beach before a long day of paddling. I’m not going to tell you where this photo was taken because the campsite is already way too overcrowded on weekends! We try to make this trip an annual event, and we had the whole place to ourselves on a midweek trip one May.

I met Mr E Man almost exactly a year after I arrived. It quickly became obvious that I was going to be staying for a lot longer than two years.

Living permanently in a city gives you an entirely different perspective on things. There’s no longer that mad dash to tick off every trip on your wish list. I also got to know a huge group of friends who all grew up here and who know the city in a completely different way. I eventually moved in with Mr E Man1 and got to know a completely different area of the city. Commercial Drive is a seriously funky place, but introduced me to a whole other side of Vancouver. We had a choice of several excellent bars and restaurants within a two block radius, but would often open our front door to find someone sleeping on the front step. We’d hang out on some great neighbourhood patios, but be badgered for money by passing street people. We saw drug deals on a regular basis and were frequently woken by loud drunken yelling and unmuffled motorbikes on weekends.

See, that’s the thing. This is a port city, and also the only place in Canada where you can sleep outside all year long without freezing to death. Everyone gravitates here. There are parts of town that are worse than anywhere I’ve ever seen. The number of people with mental health problems and / or addiction issues who live in the Downtown Eastside, on and off the streets, is simply staggering. The more I live here, the more I appreciate that this is not a paradise for everyone.

And while we’re talking about the city’s downsides, I have to mention the rampant NIMBYism (Olympics? No! Rapid transit expansion? No!) and, of course, the rain. It rains a LOT here in the winter. The summers are great, but avoid November-April if you don’t want to get wet. This last year was especially miserable; everyone was complaining about how dark and murky it was. Being a skier helps – if it’s raining in town it’s probably snowing on the mountains – but we can’t afford to go skiing often enough to mitigate the gloominess.

But hey, the summers are great, and we’ll hopefully be spared the worst of the predicted future water shortages. I just hope the American army is nice to us when they invade looking for water in 30 years or so 😉

I’ve put down roots here now. We bought a house – not a very good house, but it’s a start – and I am still in love with Vancouver. When I first moved here I’d have what I call “Vancouver Moments” – when I would catch a glimpse of the mountains or the water and think “I am so glad I live here”. They’re not quite as common now, but I still have my VMs. Especially on the first clear day after the onset of the nasty winter rain, when the mountains come into view from behind the clouds and reveal their fresh snowy caps. 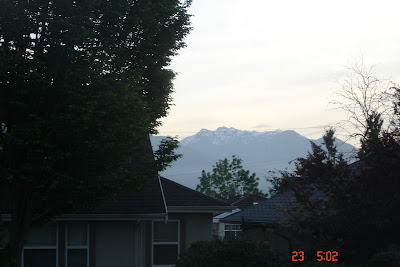 View from our living room window. Part of the delay in writing this second post was due to the wait for clear weather at the right time of day – necessary for this photo! When we looked around the house, the previous owners stressed the mountain view and we scoffed about it in the car on the way home. “Call that a mountain view?! You can only see part of Seymour Mountain, and nothing of Cypress or Grouse!”. Of course, now that we own the place, we tell everyone we have a mountain view.

The last couple of summers have been busy beyond all belief. We bought a house in 2006 and got married in 2007, and we spent more time with realtors, mortgage brokers, caterers and florists than with our friends. I only went camping and kayaking (on separate occasions) once each last year, and we never seemed to have any money. Now that the madness is over, I can’t wait to start really enjoying the city and its surroundings again. The sunshine is back, camping trips are planned, and we’re going for our first paddle of the year later today. Just a 2 hour cruise along Jericho beach with our out-of-town guests, but hopefully the start of a good season.

I look forward to seeing the city through our visitors’ eyes; it’s good to be reminded of how my time in Vancouver began.

1He broke his leg and was powerless to stop me. I moved in to help him with his cooking and laundry while he was in his cast, and never left.

"one of the sillier science bloggers [...] I thought I should give a warning to the more staid members of the community." - Bob O'Hara, December 2010
View all posts by Cath@VWXYNot? →
This entry was posted in kayaking, personal, photos, snow, sport, Vancouver. Bookmark the permalink.

7 Responses to Cath and the City Part 2