Just one week to go until we crown a winner, and things are looking pretty tight at the top! 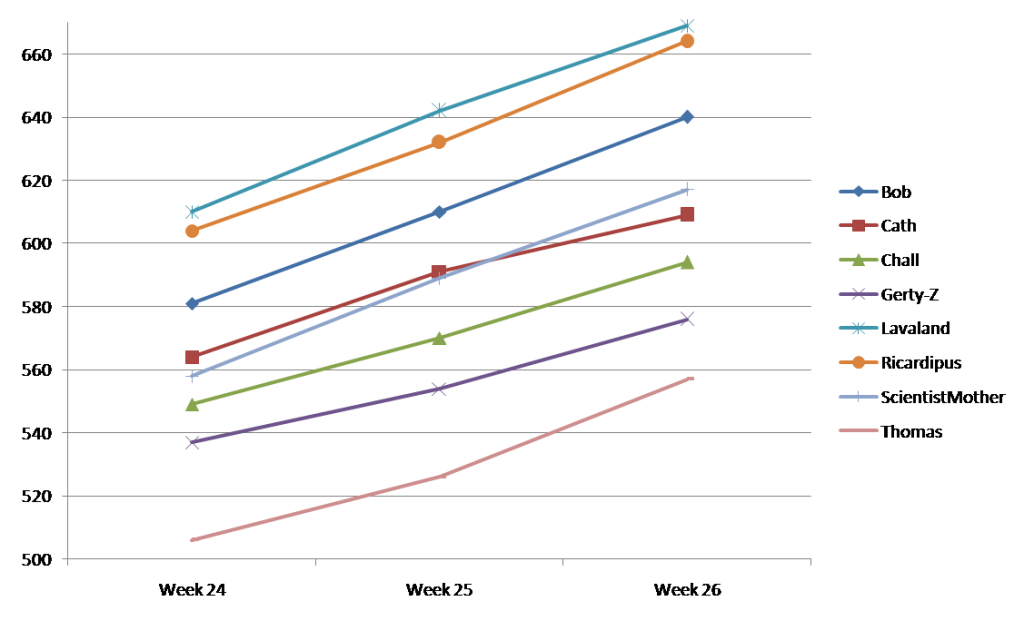 Ricardipus made up some ground on first-placed Lavaland, and if I were them I’d be choosing this week’s players veeeeeery carefully indeed… either of them could win this! A series of strong weeks finally paid off for ScientistMother as she passed me to take fourth place, but I have to say that Bob looks pretty secure in third. There’s clear space between each pair of the remaining four players, but anything can happen as teams dig deep to try and make the play-offs, and we could still see some shake-ups over the next few days!

Of course, the Monday morning standings don’t tell the whole story – the scores are updated daily, and there’s typically lots of jostling for position:

Daily break-down of this week's points. I wish I'd thought to make this graph in a week when I actually did well...

The Canucks clinched the Presidents’ Trophy on Thursday, with four games to spare and before any other team in the West had even clinched a play-off spot. Amid the celebrations and jubilation, I announced that I would have an all-Canucks team for the final week of the pool. However, I was forced to reconsider when we lost 4-1 in an atrocious game against the Oilers on Saturday. I probably shouldn’t put all my trust in players whose only goal for the week is not to get injured, but I’ll probably keep Danny Sedin, who’s still leading the individual scoring rankings. Actually I might add Hank, too – a Sedin one-two would be pretty sweet!

I hope you all enjoy the last week of the regular season!